With cases of fetal anomaly, we are faced with several emotional and physical challenges for the preborn child and the family. The diagnosis will play a large part in the child’s future, and it may even impact the mother’s health (during and after the pregnancy). The parents will have to come to terms with their child’s diagnosis and the effect that it will have on their future and their family. If a prenatal diagnosis returns unexpected results, the parents may be faced with questions that they never wanted to answer: Why? Why us? Why our baby? What will we do? How can I afford to care for this child? Will my child be happy? Will we be happy?

It is unarguably difficult and upsetting to learn that one’s preborn child may be born with disabilities or may even die before or soon after birth. This is devastating news for many parents, and we recognize that there will be sadness, frustration, and stress.

Pro-abortion rights activists demand that we make exceptions for certain persons– claiming that the people involved will be spared suffering (e.g. emotionally, physically). However, in addition to expressing genuine empathy, we have to ask a few important questions. To recommend the execution of a sick person is not compassionate.

Abortions due to fetal anomaly are often late-term. Read our blog, A Response to a Mom Defending Her Late-Term Abortion. 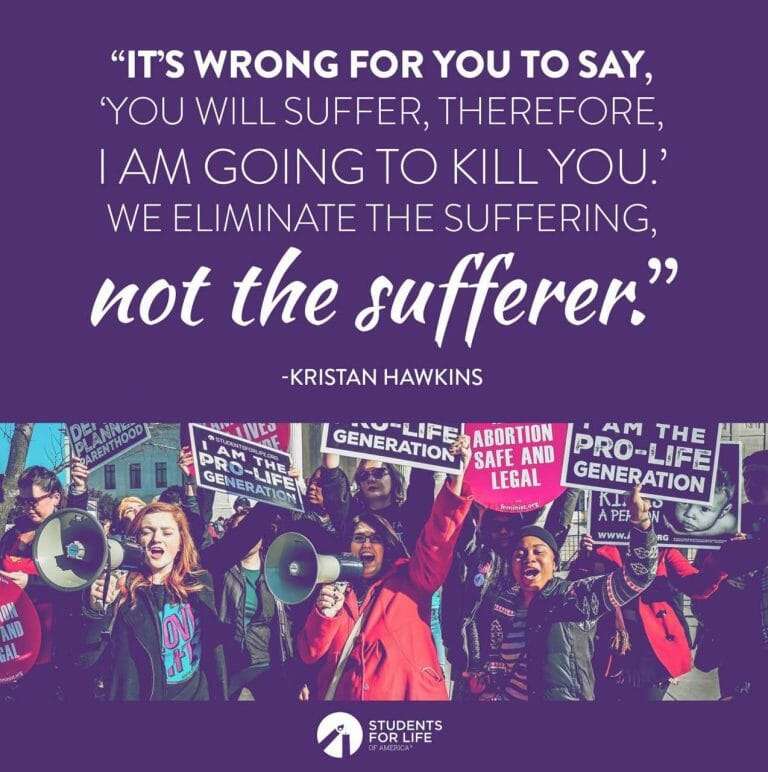 Our objections to abortion in fetal anomaly cases include:

We affirm that the best moral and compassionate choice is to protect the life of the child, to support the mother throughout her pregnancy, and to assist the family in finding resources and support. If the child is expected to have a short life, the time with her child will give her a few precious memories and allow her to say good-bye. We recommend that parents facing their child’s death (soon after birth) seek perinatal hospice and palliative care resources. If the child is diagnosed with a non-life threatening disorder (e.g. Down syndrome), we recognize that this child is precious, loved, and wanted, and we must support the family in finding the resources that they may need to give this child the best future possible.

Reach out to your SFLA Regional Coordinator at [yourstate]@studentsforlife.org or visit Students for Life HQ for more on responding to abortion in cases of fetal anomaly.

When is prenatal testing done?

Prenatal testing includes screening and diagnostic tests throughout pregnancy. Screening tests (such as ultrasound, non-invasive blood tests and chorionic villi sampling) can be performed as early as 10 weeks. Diagnostic tests (such as amniocentesis) are typically performed after the 15th week of pregnancy.  Tests are used to identify conditions such as Down syndrome and spina bifida. Results are not necessarily conclusive, but may indicate a higher risk for a particular condition.

That number is highly disturbing. And it may even be a low estimate. Findings included in an April 2022 New York Times article identified five microdeletion screenings for which about 85 percent of the positive results are false positives.

How does prenatal diagnosis affect a parent’s attitude towards the pregnancy?

Prenatal diagnosis can be a blessing in that it is often able to detect problems with the pregnancy or the child’s health and thereby provide the opportunity for doctors to better care for the mother and the child. Some parents find comfort in this knowledge.

However, for some, the knowledge can overwhelm the parents and in turn cause them to make decisions out of fear and anxiety. In the United States, about 13% of abortions are committed due to the possible health issues with the child. (This is an estimated 130,000-150,000 children each year.) Moreover, it is shocking to realize that over 90% of preborn children diagnosed with Down syndrome are aborted. Unfortunately, there is an overwhelming pressure to abort the child. Here is what one source stated:

Despite the shock and grief they may experience upon hearing the news of a fetal anomaly, the pregnant woman and her partner are usually urged to make the decision to terminate quickly. Behind the urgency is the physician’s desire to avoid complications of ‘late’ terminations of pregnancy. Because of the delays involved in amniocentesis, abortions may occur in the second and even third trimester pregnancy. In health care settings, the issue of such late abortions has raised ethical and legal questions. In one early study, most of the terminations occurred within 72 hours of the woman receiving the news of the abnormality. This hardly allows time for the couple to become informed about parenting children born with that anomaly and thus considering carrying through with the pregnancy. – from Attitudes of Patients after “Genetic” Termination of Pregnancy (British Medical Journal)

What justifications for abortion do pro-abortion supporters offer in these cases?

The most common themes among those who promote abortion in cases of fetal anomaly include the desires to spare the mother from the emotional pain of her child’s death, to eliminate the family the burden (e.g. financially, physically) of the child’s disability, and to prevent the possible suffering of the child. They ignore the fact that abortion kills a living human being and that the abortion will likely add to the mother’s emotional burden.

If the child is going to die anyway, why not just get an abortion? Isn’t it the same outcome?

Abortion is the intentional ending of a child’s life. For this act, a mother will have to not only cope with the grief of the diagnosis and the death of her child, but she will also have to grieve for the part that she played in her child’s death. Personal testimonies from post-abortive women show that abortion may lead to a lifetime of grief. By carrying the pregnancy to term, a mother has the opportunity to cherish her child and to let her child go – assuming the prognosis was correct in the first place.

What about when the child will be born with a disability?

For children who will be born with a disability or a disorder, there are many organizations and support groups who are available to help understand the child’s condition and to prepare parents to care for their child. Not to mention, when we take eugenic termination out of the picture, it encourages medical specialists to seek treatments for conditions instead of just killing the person who has them.

Will the mother suffer mentally or emotionally from continuing such a pregnancy?

“Research suggests that women who terminate for fetal anomalies experience grief as intense as that of parents experiencing a spontaneous death of a baby (Zeanah 1993) and that aborting a baby with birth defects can be a “traumatic event … which entails the risk of severe and complicated grieving.” (Kersting 2004) One long-term study found that “a substantial number … showed pathological scores for post-traumatic stress.” (Korenromp et al, 2005) And a recent followup study found that 14 months after the termination, nearly 17 percent of women were diagnosed with a psychiatric disorder such as post-traumatic stress, anxiety or depression. (Kersting 2009) Termination is not a shortcut through grief. In contrast, parental responses to perinatal hospice are “overwhelmingly positive” (Calhoun & Hoeldtke 2000), and parents report being emotionally and spiritually prepared for their infant’s death and feeling “a sense of gratitude and peace surrounding the brief life of their child” (Sumner 2001).” — from PerinatalHospice.org

Before you were born, I only worried about how your disability reflected on me.  Looking at it now, there’s no better mirror in the world.  You can find the light in the darkest places of my soul and reflect them with a warmth that rivals the sun.  You’re my light in the dark and it’s a privilege to be your dad. – Heath White

If I can keep one family, one person, from having to live with the guilt and almost making the mistake that  I almost made, it’s going to be worth the pain…. –– Heath White

My daughter is not some abnormal freak … She can, and does, lead a happy, fulfilled life. – Mother of a 5-year-old girl with a cleft lip and palate

Lacey and Christian Buchanan: Inspirational story of a mother who chose life for her son (Christian), who was born with a rare disorder.

Perfect: Heath White’s confession of coping with his daughter’s diagnosis and building a loving relationship with her.

If you have discovered that your preborn child may one of these conditions, here’s what you can do:

If you or a friend are seeking more information about prenatal diagnosis, perinatal hospice, and like-minded organizations, please see the following resources:

All that Love can Do