Abortion is clearly dangerous for the preborn child whose life is being directly targeted. But how much do women know about the danger abortion poses to them? Women deserve better than to have potential physical and psychological abortion risks hidden from them. Everyone deserves informed consent for any type of procedure, and abortion is no exception. There are too many women who found out weeks, months, or even years after their abortion 1) what the procedure actually consisted of 2) that it took a permanent physical toll on their body and/or 3) that it was to blame for emotional struggles later on.

New studies have shown that women who have abortions are 81% more likely to experience subsequent mental health problems. 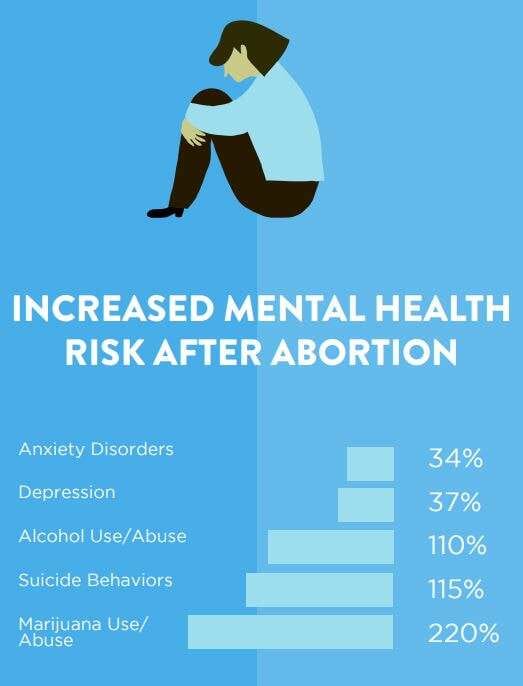 As many as 60%of women having an abortion experience some level of emotional distress afterwards. In 30%of women, the distress is classified as severe.(Hanna Soderberg, European Journal of Obstetrics & Gynecology and Reproductive Biology, 1998)

Risks if the abortion goes as planned:

All women, especially young teenagers, are at risk for damage to their cervix during an abortion, which can lead to complications with later pregnancies.(Kenneth Schultz, The Lancet, 1983)

“Complications such as bleeding in the first and third trimesters, abnormal presentations and premature rupture of the membranes, abruptio placentae, fetal distress, low birth weight, short gestation, and major malformations occurred more often among women with a history of two or more induced abortions.”(Shari Linn, American Journal of Obstetrics and Gynecology, 1983)

Abortion can increase your chance of having an ectopic (or tubal) pregnancy in the future.(Anna Kalandidi, British Journal of Obstetrics and Gynecology,1991.

Abortion can increase your risk for breast cancer. A review analyzing 23 studies on breast cancer and abortion identified 17 of those studies indicate an increased risk of breast cancer among women having an abortion.(Joel Brind, Journal of Epidemiology and Community Health, 1996). For more information on this topic, go to www.abortionbreastcancer.com and www.bcpinstitute.org.

122 Studies from 1960s to Present: Relationship Between Abortion and Premature Births