“Personhood” refers to the legal recognition of human beings in all stages of life –beginning at biological conception- as human persons having full natural and civil rights. Personhood is controversial to those who advocate abortion, for they view preborn humans as mere “clumps of cells” with no legal rights. All of us in the pro-life movement are for the full, legal recognition and protection of personhood for all human beings. It does not matter if these human “clumps of cells” are an embryo, toddler, adolescent, adult, or elderly person.

What Abortion Supporters Must Admit

Scientifically, abortion advocates cannot deny that a fetus (which is a Latin word meaning “young one”) conceived by two humans is anything other than a human. To do this would be to deny the fundamental law of biogenesis.

They must also admit that the new human is alive. A human zygote, embryo, fetus – all stages of preborn life – align with the very definition of the word “life,” which is: “The condition that distinguishes animals and plants from inorganic matter, including the capacity for growth, reproduction, functional activity, & continual change preceding death.”

Abortion supporters have been trying to convince Americans that personhood laws would outlaw hormonal contraception because it can destroy a “fertilized egg,” not a human being. Yet, a fertilized egg IS a human embryo. 95% of biologists, including pro-choice ones, agree that human life begins at the moment of fertilization – when the sperm and egg unite and create a genetically distinct human being.

Nearly 60 years ago, the American College of Obstetricians and Gynecologists (ACOG) changed the definition of pregnancy to begin at the implantation of the human embryo into the mother’s uterine wall, not the moment of fertilization – conception – when a human life is formed.

This definition of pregnancy was carefully changed in order to allow a “cover” for IVF, cloning, stem cell research, hormonal birth control and birth control devices, and other reproductive debates. It’s conjectured that this decision was also in the interest of making sure Christians and other pro-life Americans would buy birth control without concern about its morality. The effect has been devastating and today, many Americans now confuse the moment of a person’s creation (fertilization) with that of when the embryo implants into the mother’s uterine wall a few days after (implantation). 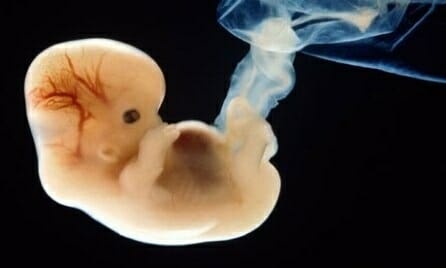 Both Sides Agree on a Key Point

Abortion supporters often admit that science says the embryo or fetus is a human being. They just refuse to accept that the human being in question is a person with rights. Even the most ardent abortion proponents, such as Princeton philosopher Peter Singer, admit that science proves life begins at conception, but choose to deny personhood to these most defenseless of human beings.

As pro-lifers, we believe that a human being obtains personhood, inherently, at the moment of creation (fertilization/conception).  We know there are dangers when the state decides if a group of human beings are persons or not. Think back to slavery and the Holocaust – both of these cases displayed an instance in which the state determined the "level" of personhood afforded to certain groups of human beings.

We know that the size, level of development, environment, and degree of dependency of a human being should never determine whether or not that human receives personhood status.  So, yes, all pro-lifers are for “personhood.”

Watch this video of pro-life apologist Josh Brahm going in-depth on how to defend the pro-life position...

For more on personhood and how to defend your pro-life stance, request a free Apologetics 101 or 201 training from your SFLA Regional Coordinator! Email [yourstate]@studentsforlife.org to request yours.

Personhood laws that could be passed in the future would recognize that a human being becomes a person at the moment of fertilization. For pro-lifers, it seems like there would be no hesitation to vote “yes” on these bills.

However, the debate rages among those in the “mushy” middle, and pro-abortion activists: would personhood laws ban birth control and IVF?  And a similar debate rages within the pro-life movement: are these laws  a “silver bullet” that will ultimately ban all abortions in the nation?  Or will their passage in one state cause the powers that be in Washington, D.C. to further cement the false notation of abortion rights in America?

First, our team at SFLA is committed to supporting any effort we believe will help end abortion and protect women, children, and families from the horror of abortion. And we do not believe in speaking ill against any strategies which reasonably seek to do so.

If personhood laws pass, hormonal contraception will not be banned.  It is true that manufacturers of the birth control pill indicate openly that the pill is capable of causing early abortions by preventing implantation due to an artificially thin endometrium.  All evidence suggests this is true, therefore we oppose their use. However, if and when hormonal contraception is proven to destroy a human embryo, the state legislature would have to assemble all available evidence that it destroys a human person, and then pass concurrent legislation.

Other mislabeled “contraception” drugs and devices that have scientifically been proven to cause abortions, like ella (www.ellacausesabortions.com) and IUDs, would be banned under this legislation, for part of their purpose is to destroy the human embryo. However, whether or not these would be banned immediately is anyone’s guess. The Legislature would have to pinpoint an instance in which one of these “contraception” methods worked as an abortifacient before this would happen.

If a personhood law were to pass, it is likely that a majority of IVF practices would be banned. Currently, many IVF practitioners take multiple eggs from a mother, create multiple embryos with the father’s sperm, and then implant 2-3 back into the mother, freezing or discarding the rest.  Learn more about IVF here.