Many people who support abortion do not actually know how they're done and the violence involved. In many cases, a simple conversation about abortion methods is all it takes for someone to realize abortion is something they can't get behind. What follows are brief medical descriptions of various abortion methods, including a video from a former abortionist.

Known as abortion pills, at-home abortion, medical abortion, and RU-486. Used through the 10th week of pregnancy, RU-486 is a two-drug method. The first pill, mifepristone, is a synthetic steroid that blocks the hormone progesterone. This is intended to kill the baby before his/her expulsion. Women then take a second drug, misoprostol (which is a synthetic prostaglandin), to induce contractions and expel the dead baby. Ella, another abortion drug which is falsely labeled as birth control, works in the same way. More from Students for Life on chemical abortion here.

After dilation of the cervix, a suction curette (a tube with a serrated tip) is inserted into the uterus. The strong suction (29 times the power of a household vacuum cleaner) tears the baby’s body apart and sucks it through the hose into a container. This is the most common method of surgical abortion in the first 12 weeks of pregnancy.

Used through the 12th week. After dilation of the cervix, a curette (a sharp, looped knife) is inserted into the uterus. The baby’s body is cut into pieces and extracted, often by suction. The uterine wall is then scraped to remove the placenta and confirm that the uterus is empty. 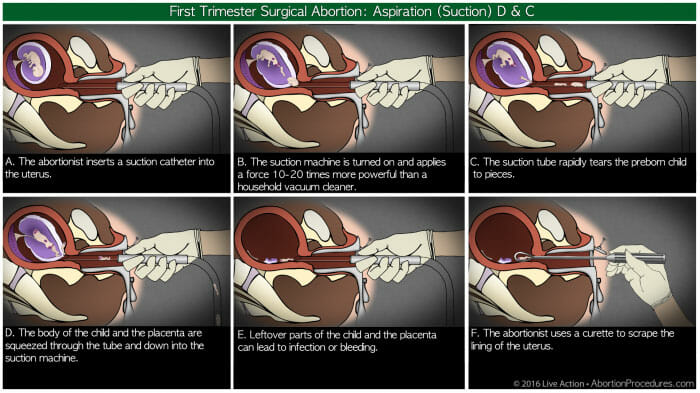 Committed up to 18 weeks. Forceps are inserted into the uterus, grabbing and twisting the baby’s body to dismember him/her. If the head is too large, it must be crushed in order to remove it. It is arguably the most barbaric of today's commonly used abortion procedures. 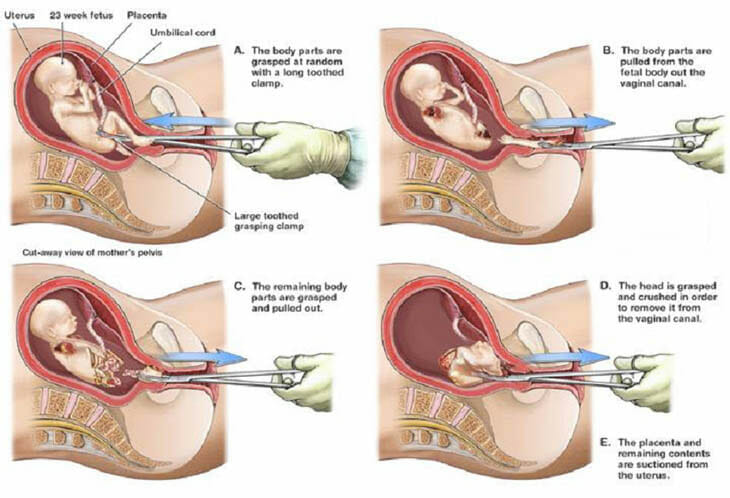 Once committed in the 2nd and 3rd trimesters and preferred by abortionists because they could be more certain that none of the child's parts were left behind. Since 2003, it has been federally outlawed in most cases. In a D&X, the cervix is dilated. Forceps extract the live baby by the feet until the head is just inside the cervix, with the rest of the body hanging outside the mother. Scissors then puncture the skull, allowing the abortionist to collapse it by suctioning out the contents. The dead baby is then fully removed from the mother.

The womb is entered by a surgical incision in the abdominal wall, similar to a Caesarean section. However, the umbilical cord is usually cut while the baby is still in the womb, cutting off the oxygen supply and causing suffocation. Sometimes, though, the baby is delivered alive and left unattended to die.

Now uncommon, but was committed in previous years between months four through seven. A 20% salt solution (the normal salt solution is .9%) is injected through the mother’s abdomen into the baby’s amniotic fluid. The baby ingests the solution and dies of salt poisoning, dehydration, and hemorrhaging of the brain. The baby’s skin is burned off. A dead or dying baby is delivered. A baby born alive is usually left unattended to die, though some have survived. Gianna Jessen is a survivor of a saline abortion.

Late-term abortion is a multi-day series of abortion procedures and is typically done through a lethal injection of Digoxin. On the first day, the woman will go into the abortion facility or hospital to begin the dilation process with seaweed sticks called laminaria. These sticks naturally expand after placement, and they allow access to the baby through the cervix. The abortionist will then use an extremely long needle to inject Digoxin into the fetus’s heart, which will cause a cardiac arrest (commonly known as a heart attack).

On the second day, the woman will continue to be artificially dilated while still carrying the dead child. She will be administered Misoprostol to artificially stimulate uterine contractions. There may also be a second injection of Digoxin.  On the third or fourth day, the mother will deliver the dead child.

Nearly 13,000 late-term abortions happen each year (according to the CDC, which, they admit, receives incomplete reporting).