On January 22, 1973, seven men on the U.S. Supreme Court struck down more than 30 state bans on abortion, and legalized abortion in all 9 months of pregnancy, for whatever reason, across the United States. Regardless of whether you know their names, these historic decisions, Roe v. Wade and Doe v. Bolton, have affected your life.

Thankfully, after nearly 50 years, the Supreme Court reversed the Roe and Doe decisions on June 24th, 2022 and returned abortion regulation to the states. Prior to their reversal, these laws were akin to abortion mandates that prevented states from banning pre-viability abortions.

America is free of the scourge of Roe v. Wade now. But what damage did it do?

There is no national reporting law in America (and never has been), so only God knows the true number of babies who have been killed by abortionists. Pew Research offers a guess as to how Roe v. Wade impacted our country's abortion rate, but even they admit, "An exact answer is hard to come by. Two organizations – the Centers for Disease Control and Prevention (CDC) and the Guttmacher Institute – try to measure this, but they use different methods and publish different figures."

Yes - one of the groups "in charge" of abortion reporting is the Guttmacher Institute, the research arm of America's largest abortion vendor, Planned Parenthood. To say there is a conflict of interest there is putting it lightly. Nevertheless, Pew pulled together the following chart outlining the dramatic skyrocket in abortion count following Roe v. Wade: 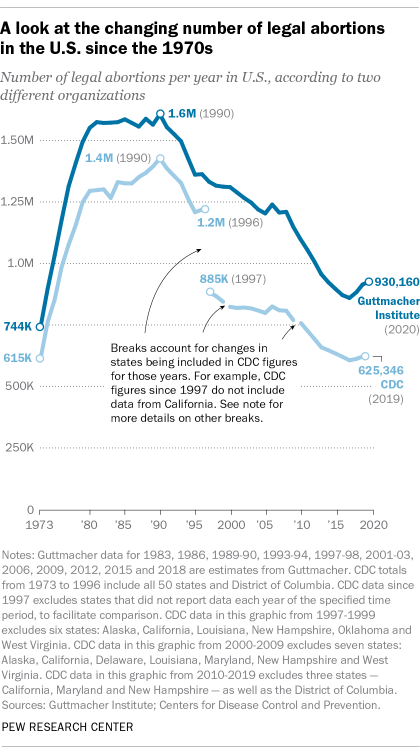 Consider just the impact that abortion has on a woman’s health: 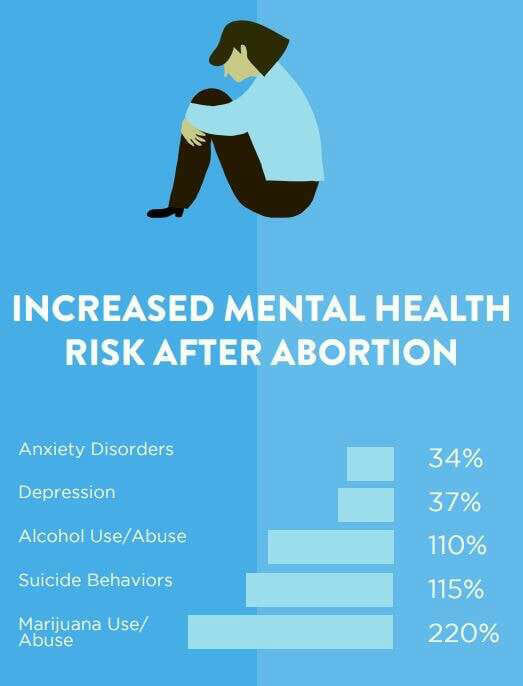 In reality, it was only the abortion industry that benefited from Roe v. Wade and Doe v. Bolton. For example, Planned Parenthood, America’s largest abortion chain, committed almost 345,672 abortions in 2018-2019, their largest annual total ever, and more than any other vendor. From those abortions, they made an estimated $1.6 billion dollars. And Planned Parenthood has reportedly mandated that its affiliates meet abortion quotas.

In 1972, the Centers for Disease Control (CDC) reported that 39 women died from illegal abortion and 24 died from legal abortion. While every death is a tragedy, this is a far cry from thousands of women per year. In fact, according to Mary Calderone, former director of Planned Parenthood, an estimated 90% of all illegal abortions were committed by licensed physicians in good standing. According to the CDC, “for 1972–2000, a total of 470 abortion-related deaths were reported in the 2001 abortion MMWR Surveillance Summary.” All Roe did was move the “abortion” sign from the back of the doctor’s office to the front.

The truth is that there is nothing safe about legal abortion. Even though abortion was illegal (until 2018) in Ireland, the country consistently boasts one of the lowest maternal mortality rates in the world according to WHO, UNICEF, UNFPA, World Bank Group, and the United Nations Population Division. The 1989 ban on abortion in Chile was correlated to a near complete reduction in abortion-related maternal mortality. In 2008, Chile had the second lowest maternal mortality rate in the Americas. And despite having the world’s most liberal abortion laws, the U.S. has the highest maternal death rate of any industrialized nation and lags behind 30 developed countries for mothers’ well-being.

There is nothing safe about legal abortion. Abortion will always be dangerous for women and bad for their health. Roe did nothing to change that. Legal abortion has not made abortion clean or safe. Abortionists like Kermit Gosnell and Douglas Karpen are butchering women in dirty facilities.

Women are physically & psychologically hurt (and even killed) by legal abortion. At the country’s most dangerous abortion facility, St. Louis Planned Parenthood, nearly 80 women have been sent to the ER with confirmed medical emergencies in the last 10 years alone. Read more about unsafe Planned Parenthood facilities. Learn more about other unsafe abortion facilities here.

Legal abortion enables men to cover up abuse of women and coerce them into having abortions, and abortion facilities have repeatedly been caught covering up sex trafficking and statutory rape. We need to be offering real support and options for women experiencing unplanned pregnancies – not worsening their situations.

The pro-abortion scare tactics that “thousands of women will die when abortion is made illegal” are false. The majority of pre-Roe abortions were not committed in back-alleys and the abortion industry has admitted that it completely made up the lie that tens of thousands of women died every year from illegal abortion. When abortion is once again unthinkable and unavailable in our nation, there will not be an epidemic of women dying. 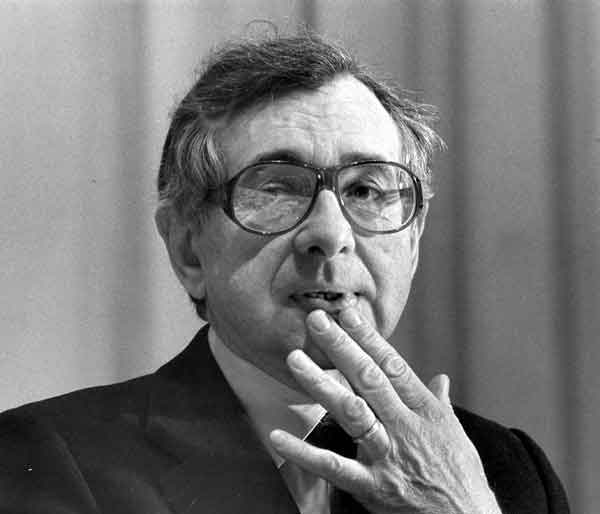 Dr. Bernard Nathanson, co-founder of NARAL, was one of the doctors fighting to legalize abortion in 1973. He himself committed over 75,000 abortions – even killing one of his own children himself. Dr. Nathanson was complicit in lying to legislators about how many women were dying in back alley abortions. He wrote,

“In NARAL, we generally emphasized the frame of the individual case, not the mass statistics, but when we spoke of the latter it was always 5,000 to 10,000 deaths a year. I confess that I knew that the figures were totally false and I suppose that others did too if they stopped to think of it. But in the ‘morality’ of our revolution, it was a useful figure, widely accepted, so why go out of our way to correct it with honest statistics?”

Later in life, Nathanson had a change of heart and renounced his pro-abortion beliefs. He wrote extensively on the error of his ways and exposed many valuable secrets about the abortion lobby’s strategies and falsehoods that led to Roe v. Wade. He is also responsible for narrating the pro-life documentary, “The Silent Scream.” He passed away in 2011.

Norma McCorvey, otherwise known as “Jane Roe” of Roe v. Wade, was another key player in the abortion ruling. The abortion lobby had been looking for someone to use as a pawn in their mission to legalize abortion. In her lawsuit, Norma claimed to have become pregnant as the result of rape and argued that she should therefore be allowed to have an abortion, despite the laws against abortion in her home state of Texas. She gave birth to the child and placed her with an adoptive family before Roe v. Wade’s passage. McCorvey remained a pro-choice activist for several years afterward.

After publicly identifying herself as Jane Roe, McCorvey became friends with advocates in the pro-life movement, including Father Frank Pavone of Priests for Life. Her book, Won By Love, recounts how the compassion pro-lifers showed to her brought her into the pro-life movement. McCorvey has admitted to the many fabrications in the Roe v. Wade case, including her claim to have been raped, and became an outspoken pro-life advocate. In 2005, she asked the United States Supreme Court to overturn Roe v. Wade on the basis of new evidence showing that abortion hurts women. McCorvey passed away in 2017. 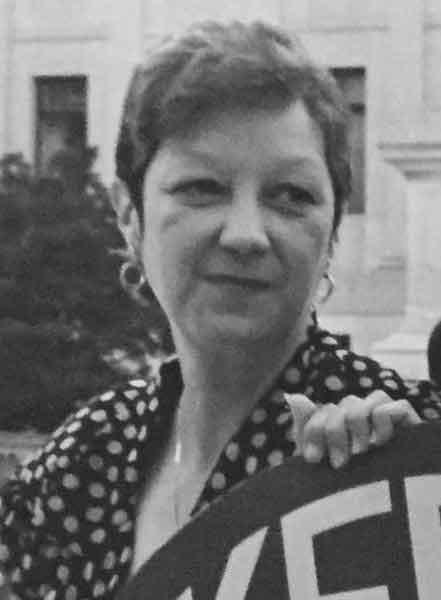 In Roe v. Wade, 410 U.S. 113 (1973), the U.S. Supreme Court held “unduly” restrictive state regulation of abortion to be unconstitutional, resulting in de facto legalization of abortion through all nine months of pregnancy in the entire United States. In a 7–2 vote the Supreme Court held that a set of Texas statutes criminalizing abortion in most instances violated a woman’s constitutional right of privacy, which the court found implicit in the liberty guarantee of the due process clause of the Fourteenth Amendment.

The case began in 1970 when Jane Roe (a fictional name used to protect the identity of Norma McCorvey) instituted federal action against Henry Wade, the district attorney of Dallas county, Texas, where Roe resided. The court disagreed with Roe’s assertion of an absolute right to terminate pregnancy in any way and at any time and attempted to balance a woman’s right of privacy with a state’s interest in regulating abortion.

Writing for the majority, Harry A. Blackmun noted that only a “compelling state interest” justifies regulations limiting “fundamental rights” such as privacy and that legislators must therefore draw statutes narrowly “to express only the legitimate state interests at stake.” The court then attempted to balance the state’s distinct compelling interests in the health of pregnant women and in the potential life of fetuses. It placed the point after which a state’s compelling interest in the pregnant woman’s health would allow it to regulate abortion “at approximately the end of the first trimester” of pregnancy. With regard to fetuses, the court located that point at “capability of meaningful life outside the mother’s womb,” or viability.

The Reversal of Roe v. Wade

On June 24th, 2022, in a 5-4 decision, the Supreme Court handed down the following: "The Constitution does not confer a right to abortion; Roe and Casey are overruled; and the authority to regulate abortion is returned to the people and their elected representatives."

The reversal came to pass thanks to a case out of Mississippi, Dobbs v. Jackson Women's Health, which sought to challenge Roe's imaginary pre-viability standard. In other words, courts throughout the years decided that states could not limit first-trimester abortions, and Mississippi said no more.

The two biggest holdings from this opinion were that Roe is reversed and “protecting the life of the unborn” is a legitimate state interest in health and safety regulations. The entire ruling is 213 pages long, but below we've pulled some of the most important quotes from it...