Overpopulation is a Myth

Have you ever heard the argument, “We need abortion because the world would be overpopulated otherwise. We won’t have enough resources for everyone if all the babies were born.”
Or maybe someone challenged you with conversations about poverty, stating the claim that abortion is merciful when confronted with lack of financial resources or other material challenges. Abortion and overpopulation is a complex issue.

Let’s get one thing straight first: the world is not overpopulated. In fact, people like Elon Musk propose quite the opposite - that a global baby bust is going to be our demise. In the United States, the population has been below replacement rate since the 1970s (people are not being born at a higher rate than people are dying). So this “crisis” is very much overstated, at the very least.

The myth of overpopulation originated in 1798 with Thomas Malthus. In An Essay on the Principles of Population, Malthus predicted that overpopulation would lead to a food shortage by 1890, ultimately leading to the destruction of humanity. This “crisis” was re-predicted numerous times over the past two centuries, but conveniently rescheduled when it did not occur. Yet, here we are, over 100 years later with the highest population of people on earth and the best food production rate in history.

The myth stems from the idea that there are so many people on the planet that our resources can’t possibly keep up. But, The Food and Agriculture Organization of the United Nations as well as the World Food Programme say, “There is enough food in the world today for everyone to have the nourishment necessary for a healthy and productive life.” And “the world currently produces enough food for everybody, but many people do not have access to it.” In other words, what we have is a distribution problem - not a supply problem.

The World Food Programme lists 6 key causes of hunger, and overpopulation is not one of them. Reducing the number of hungry people will not make people less hungry if the infrastructure to get resources to them is inadequate, or war is destroying crops and interfering with relief efforts. The tendency to suggest abortion as a "solution" to suffering suggests that we ought to eliminate the sufferer instead of solving problems.

Abortion and Overpopulation - Is it a Solution?

Although we’ve already established that overpopulation is a myth, even if the earth was overpopulated, does that justify the taking of innocent life?

Killing living human beings is not an acceptable solution to any problem. If we attempted to kill human beings to solve the overpopulation problem, it would make the most sense to kill the people who are not contributing to society – toddlers and infants. Is it morally acceptable to kill them? No. We would never accept the killing of toddlers to reduce the population, so if we believe in true human equality, we cannot accept killing of preborn human beings to accomplish the same goal.

In the name of overpopulation, abortion is justified by its supporters because they refuse to acknowledge the humanity of the preborn, not because we are actually lacking in resources. Conversations about abortion must always start and end with what abortion is and what preborn humans are.

Below are some great videos to review to better understand the myth of overpopulation and limited resources. 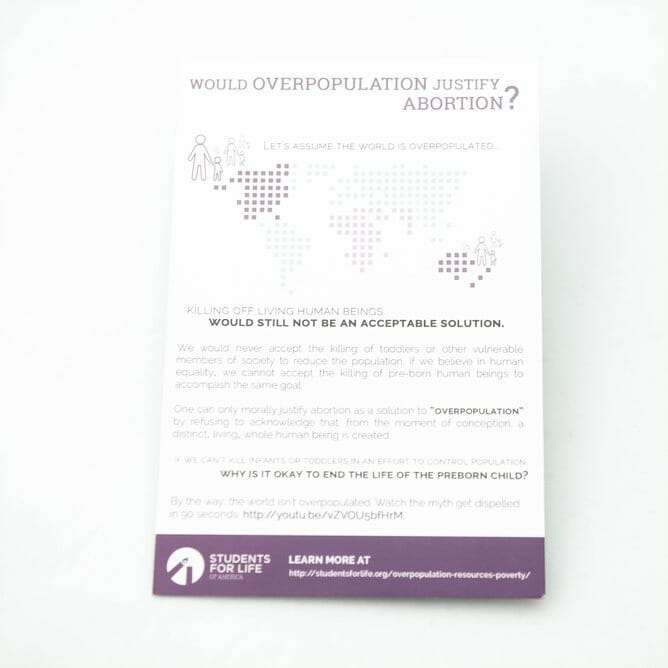 Overpopulation: The Making of a Myth

Poverty: Where We All Started

Food: There’s Lots Of It