People who still support abortion even if they accept that it kills a human being almost always do so on the grounds of “bodily rights,” or “bodily autonomy.” It’s important to understand the argument for abortion from a bodily rights perspective.

Sometimes when an abortion advocate says, “My body, my choice,” they mean this only rhetorically and the concept is easily refuted by explaining that there are literally, biologically, two bodies involved. These are folks who either dozed off during high school science class or are exceedingly desperate for justification of abortion who try to make the case that the zygote/embryo/fetus is a biological part of the mother’s body. 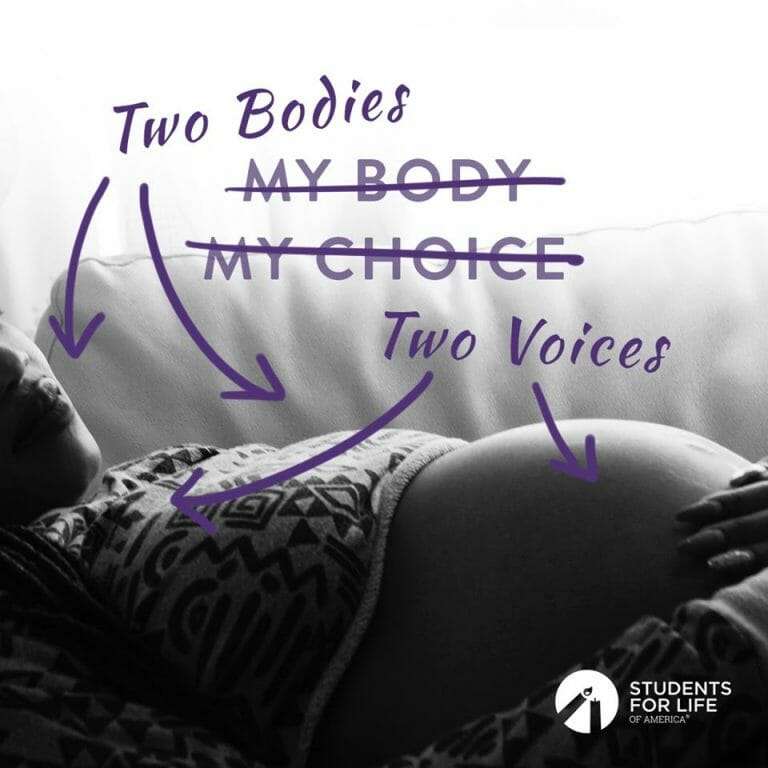 For pro-lifers, all this takes is a quick explanation. For example, the fetus has different DNA, possibly a different sex or blood type, and fits all other criteria for existence as a distinct organism. Pointing out where a gestating child differs from an actual body organ, like a pancreas, can be useful. An organ is a specialized group of tissue that performs a certain function for the organism’s body. It cannot do so without the instruction of the mother’s brain. A baby, from the moment of conception, is self-directed. He/she is not serving the mother’s body like an organ, and the mother’s brain is not directing the growth.

But that’s pretty obvious and most of the time what people mean is one of two things. Either they view the woman as a Sovereign Zone, or they think she should have the Right to Refuse. These are more sophisticated arguments, but we’ll walk through them both. You will need to ask the person you are talking with questions to determine which camp they fall into.

In this viewpoint, the idea is that the woman’s body is a “sovereign zone” over which she has complete and total jurisdiction. No one can impose limitations on her sovereignty, regardless of whether it harms others. Most people think they believe this, but when you draw out the concept a bit, they get uncomfortable with the ramifications.

Most pro-choice people are reasonably well-intentioned and not out for blood. If you press them for how far they think a woman’s bodily autonomy stretches, they realize they don’t really think the woman should be able to do anything to the child. In this type of dialogue, you can start trying to find some common ground by sharing situations or analogies that most people disagree with.

What do they think about…

Melissa Ann Rowland in St. Lake City in 2004 refused an emergency C-section for her twins because she didn’t want a scar. She went outside to have a cigarette, came back in, and finally after hours of begging by physicians, she consented. By the time doctors were able to get to her babies, one had died and the other was born barely alive and addicted to cocaine. She was charged for murder.

If the pro-choice person says that the mother has absolute autonomy over her body, then there’s nothing wrong with what Rowland did in the story above. However, if they admit that there is something that a woman cannot do to her preborn child, than the sovereign zone argument falls apart.

There are a lot of pro-choice (or even pro-abortion) students who are either deliberately trying to push your buttons, or actually morally depraved. If the material above didn’t do the trick, you may need to use a more extreme analogy to find their limits.

Before you give any analogy (also known as a “thought experiment”), it’s important to get the person you are talking with to go along with you in the analogy, so you need a clear transition and an acknowledgement that they understand you’re telling a story. It can be as simple as saying, I have a funny thought experiment for you. It may seem odd at first, but hang with me…

If someone supports abortion on the grounds that the woman’s body is a type of “sovereign zone” where she may do whatever she wants with no regard to the other person inside of her, that person must also support the use of thalidomide if the woman so chooses. If they hold to their viewpoint that it would be okay for the woman to take Thalidomide to treat morning sickness, you can make the analogy a little more uncomfortable by asking the question

If not, then a woman really isn’t a sovereign zone.  If so, the person has bitten a very morally dubious bullet and it’s totally reasonable to call them out on that. The next step in this case is to ask if torture is permissible for born people, then walk it back to Apologetics 101 about why the preborn are equal to the born.

Click here to learn more about Right to Refuse arguments.