Abortion for Life of the Mother Cases

Abortion for life of the mother is the abortion of a child due to a perceived, potentially fatal health risk to the mother (either pregnancy-related or not). It's a somewhat common abortion law exception, meaning there are legislatures that pass abortion bans or limits but include a "life of the mother" exception.

As compassionate conversationalists, we must assume that when abortion supporters use 'abortion for life of the mother' as a cornerstone of their argument, that it's coming from a place of genuine concern. Even so, a question we have to ask is: what constitutes the “life and health of the mother”?

When it comes to abortion, intent matters.

The intent of abortion is death, while the intent of intervening when a mother is in danger is life.
Students for Life of America and Students for Life Action support life-saving efforts that treat both mother and child as patients worthy of saving, knowing that sometimes not all can be saved. After all, medical emergencies arise all the time in which not everyone can be saved. But that's a far cry from actively killing those involved in the crisis. Our commitment to protecting vulnerable life extends to mothers when their lives are in danger in pregnancy and circumstances make the survival of both impossible.

A Little Legal History on Abortion for Life of the Mother

In 1973, the Supreme Court handed down Roe v. Wade, the most famous abortion ruling perpetrated by our nation. But Roe also had a companion case that was decided the same day called Doe v. Bolton. Doe pushed the extremism imposed by the Supreme Court to its absolute limit by stating that “medical judgment may be exercised in the light of all factors – physical, emotional, psychological, familial, and the woman’s age – relevant to the well-being of the patient. All these factors may relate to health.”

In other words, literally anything could qualify as pertaining to "health of the mother" under Doe, whether it was stress, pressure from family, or some morning sickness. Not to mention, an abortionist or abortion facility counselor has zero incentive to determine whether the woman on the other side of the table was seeking an abortion for a "legitimate" health concern.

In May 2019, a Gallup poll indicated that only 25% of Americans believe that abortion should be legal under any circumstances, while 53% would allow it only under certain circumstances. Still, it took 50 years for the Supreme Court to acknowledge the extremism and overreach of Roe and Doe by reversing both on June 24th, 2022.

Is Abortion for Life of the Mother Ever Valid?

None of the above negates the reality that complicated pregnancies are a real thing. There are certainly cases where the mother’s life may be put at risk by pregnancy, such as in an ectopic pregnancy. Fortunately, true 'life of the mother' cases are rare, and due to amazing advances in medical technology, some are becoming more and more treatable. Watch the video below...

Actual life-threatening issues involving pregnancy are vastly different than generic “health” issues. If any doctor tells you that a pregnancy is a risk to you and recommends an abortion, seek a second opinion. Too often, abortion is a lazy solution that spares doctors from figuring out an actual treatment for you and your child. Keep in mind that some doctors fear the malpractice lawsuits associated with treating high-risk pregnancies, and are unwilling to take patients with complicated pregnancies. Fortunately, there are many doctors that specialize in high-risk pregnancies that can successfully treat both the mother and the preborn child as patients.

How Relevant is the "Health" Argument?

According to a 2013 study, only 6% of women who had an abortion cited concern for their own health as the primary reason for seeking an abortion. Maternal health concerns covered a broad range of conditions, including gestational diabetes and morning sickness, both of which are naturally occurring physiological reactions to pregnancy. Most commonly, women cited “feeling too ill during the pregnancy to work or take care of other children” as their primary health concern.

For more on how to respond to this hard question, listen to pro-life apologist Josh Brahm’s take here.

The bottom line is that, yes, pregnancy affects a woman’s body. Morning sickness, weight gain, headaches, moodiness, swelling, and other reactions are all common parts of pregnancy, which is a natural and temporary state for the female body. Do these common symptoms of pregnancy (which apply to nearly all pregnancies) really constitute a risk to the mother’s health that justifies killing the gestating child? 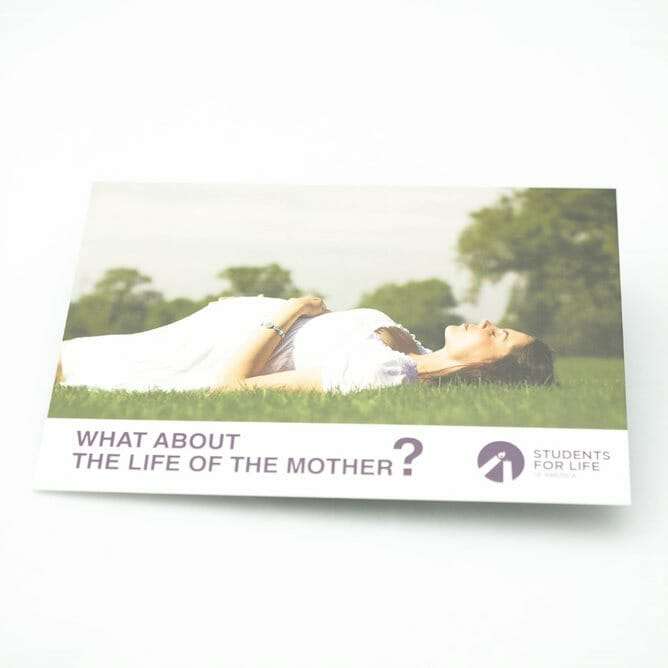 Order "What About the Life of the Mother" Topic Cards Here
or
Request some for FREE from your state's Regional Coordinator by emailing [yourstate]@studentsforlife.org.