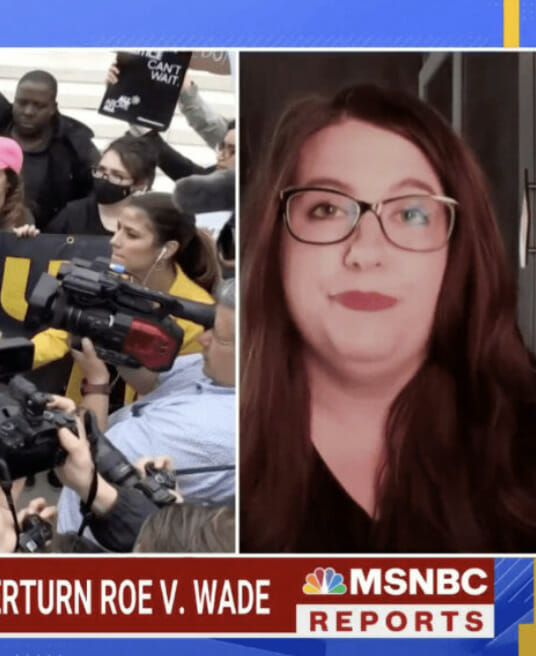 As part of the plethora of Students for Life of America (SFLA) media coverage following the leaked United States Supreme Court brief that suggests Roe v. Wade may be reversed in the coming months, SFLA President Kristan Hawkins spoke with MSNBC anchor Andrea Mitchell—and when Hawkins was presented with the abortion lobby’s favorite myths, she did not back down. Read a synopsis of their conversation below, and click HERE to watch the video:

In the interview’s opening, Mitchell asked Hawkins what her view was on the Court’s leaked brief that would reverse Roe v. Wade without exceptions for rape and incest, calling it a “radical decision”—but Hawkins was quick to assert that this ruling would be quite the opposite of radical.

Hawkins said, “This actually isn’t a radical decision. Ruth Bader Ginsberg herself argued that Roe v. Wade was fatally flawed when the seven men in 1973 handed it down.”

Sarcastically labelling the leaked brief a “drastic decision,” Hawkins explained that the abortion decision would be handed back to the states (as it was before Roe in 1973) where voters would have the opportunity to have their voices heard instead of the handful of individuals on the Supreme Court. She also cited that 8 out of 10 Millennials and Gen Z, the largest voting bloc in the United States, say that they want a voice in the vote on abortion policy.

Hawkins added, “When you ask young people and Americans of all ages how they feel about abortion and when you tell them about the extremism of Roe v. Wade and Doe v. Bolton which allow abortion in all nine months of pregnancy for whatever reason and sometimes with taxpayer funds, the majority end up opposing Roe v. Wade.”

While this evidence shows that a decision to reverse Roe and give the power back to the states is more in line with what many Americans want, Mitchell incorrectly argued, “Well, Roe v. Wade only permits it up until viability between 23-24 months.”

Luckily, Hawkins is always ready to set the abortion lobby straight, and she did not let such a denial of truth slip, interjecting:

“No, Roe v. Wade and Doe v. Bolton together legalized abortion up to until the moment of birth. That’s why you see in states like New Mexico and Colorado women can actually obtain abortions into the ninth month of pregnancy because those two decisions were issued on the same day in 1973.”

In an effort to pivot from her mistake, Mitchell replied, “Well, there certainly are exceptions there” (there most certainly are not; read the cases!), and she moved to ask Hawkins her opinion on rape and incest exceptions. Perhaps Mitchell was using this topic to elicit a gotcha moment as the abortion lobby is fond of doing—if so, she definitely didn’t get what she wanted.

Hawkins has been outspoken against rape and incest exceptions for years. She has given countless speeches and written numerous articles on the topic, and the Los Angeles Times has credited SFLA as being chiefly responsible for giving “political life to more stringent abortion bans once viewed as politically impossible.”

Hawkins said, “I don’t think that we should issue birth certificates with rating systems based on how someone was conceived. A birth certificate notes one thing: a unique, whole, living human being has come into existence…

“I really think MSNBC really needs to speak with my friends who were conceived during a sexual assault because…the reality is that those children’s lives are no less valuable than our own lives simply because of the heinous crimes of their fathers.”

(Click HERE to watch Sen. James Lankford (R-OK) and Hawkins discuss children who were born out of rape.)

Except that birth certificates do have something to do with it—and actually for the exact reason Mitchell pointed out. Yes, birth certificates don’t mention how someone was conceived because it doesn’t matter; what does matter is that they are noted as a living member of the human species and therefore a valuable life that should be treated as sacred.

Hawkins reiterated this and added that the Pro-Life movement agrees that we need to go as far as possible to help these women—that’s why SFLA started our Standing with You initiative which helps pregnant, parenting, and post-abortive women. However, support for someone’s rights have to stop when they are asking to kill someone else—that should never be an option on the table.

READ NEXT: It’s Official: We’re So Done with Rape and Incest Exceptions