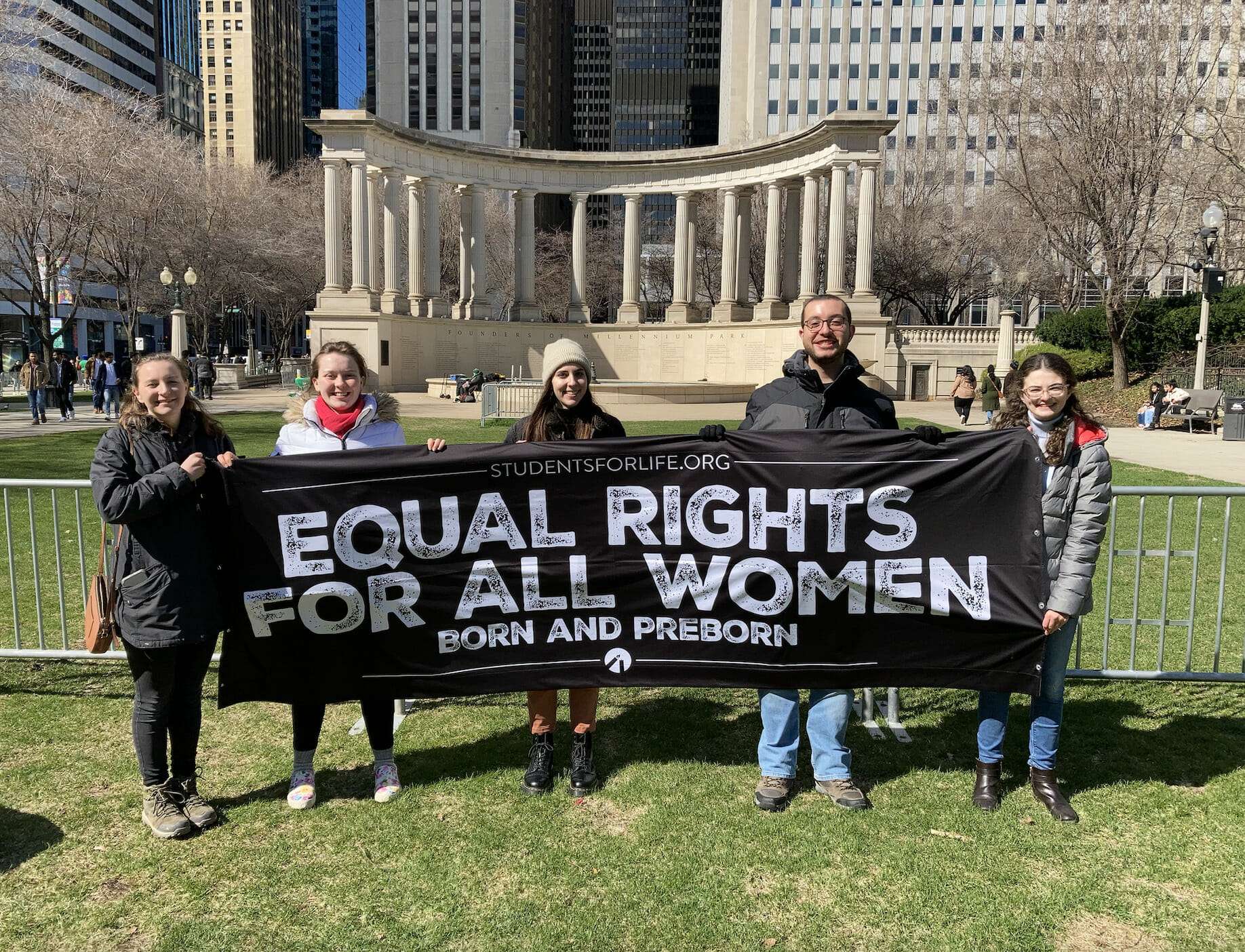 Over the weekend, the Pro-Life Generation mobilized across the country to combat the “Rise Up 4 Abortion Rights” radical message demanding abortion on-demand without apology. Students for Life of America (SFLA) had a clear objective—educate protestors and the public on the simple fact that abortion kills children and hurts women, it doesn’t help anyone.

From the East to West Coasts, SFLA activists boldly appeared before pro-abortion protestors in Austin, Chicago, Boston, New York City, San Fransisco, and Seattle equipped with the truth. The Pro-Life Generation is frequently met with hostility and aggressive pro-abortion crowds that don’t afford free speech rights to anyone who stands up to their injustice.

We saw this demonstrated in several cities over the weekend including Austin, Seattle, and Boston. In Austin, pro-abortionists used obscene language and hand gestures towards pro-lifers INCLUDING a twelve-year-old child.

“There was a lot of visible hurt from these aggressive people that no number of abortions could deal with. My heart breaks for all the women there who may not get the help they truly need, especially because of the attitude the pro-abortion side has about such hurts from abortion. It is a vicious cycle of violence perpetuated on the pro-abortion side. I hope many went home that night and reflected upon our words and their actions towards us. I am extremely proud of the level of maturity and focus SFLA maintained despite difficult circumstances.”

In Boston, our SFLA team also faced harsh words and actions from self-proclaimed feminists. Instead of respecting the free speech of pro-life women, the pro-abortion rally took to immature tactics like blocking signs, whistling loudly in pro-lifer’s ears, and shouting profanities in their faces. In other words, their rally was not about empowering women at all; it was about empowering abortion even when doing so involved discriminating against fellow women.

“It’s somewhat startling that at a rally which markets itself as feminist, we would be met with such hostility for defending equal rights for all women and authentic feminism. Within minutes of arriving, we were met with a shower of expletive statements, and one male pro-abortion protestor approached to scream in our ears, claiming that countless women would die without abortion.”

In Seattle, a group that calls itself “Refuse Fascism” hosted a rally that blocked traffic and feverishly harassed pro-life supporters. We have seen pro-abortionist resort to using umbrellas to block pro-life messages, and those in Seattle did exactly that while personally insulting and speaking degradingly to pro-life women.

Extremists such as ANTIFA at the rally tried to prohibit SFLA and pro-lifers from walking down the sidewalk and when they weren’t yelling expletives, they were throwing water and even dropping a water balloon merely because people came out to stand for life. Why are they so afraid of their position being challenged?

Hearing the words, “abortion betrays women, women deserve better,” from SFLA Regional Coordinator, Karlie Lodjic, prompted pro-abortion protestors to use their megaphone sirens directly into Karlie’s ear. She said, “Despite that unpleasantness, it resulted in the interruption and temporary end of their chants that continuously praised the killing of innocent children. There were even pro-life people in front of their march at one point. We protested their march until their numbers started to dwindle and they turned back.”

At Millenium Park in Chicago, pro-abortionists rallied to show their outrage over the advancement of pro-life legislation sweeping across the nation.

Though the rally focused primarily on the cause to legalize abortion worldwide, the speakers and crowd also made a point to express their outrage towards other topics like their interpretations of patriarchy, racism, capitalism, and religion. At one point, a few of the attendees bore fake chains around their bodies to push the ideology that women who cannot get an abortion are modern-day slaves.

Hardly anyone wanted to engage with SFLA, so the leaders made it a point to show their signs promoting pro-life values and pregnancy resources high for all to see. The police officers tasked with keeping the scene safe were very kind and a few even approached during the rally to ask questions regarding abortion and the pro-life stance.

“Towards the end of the rally, a couple of strangers visiting Chicago thanked us for being there and even joined us until the rally members dispersed. I’m very proud of my students and volunteers who stepped up to protest the rally and of their continuous efforts to promote pro-life values across our city and beyond.”

In New York City more than a dozen pro-life advocates attended the rally, drawing the eyes and cameras of many on the opposing side. As they stood for life and prayed with their signs, some pro-abortion activists shouted profanities and made crude gestures—but others gave a thumbs up or subtle head-nod. One man passing by even shouted, “Abortion is murder!” We couldn’t agree more.

We are proud of the pro-life students at Columbia University who facilitated conversations with rally observers and are thankful for the two courageous football players who came to look out for the safety of pro-life activists at the rally.

At University of California-Berkeley in San Fransisco, the pro-abortionists displayed a strange calendar of events including a man dancing in a green suit and a woman yelling about communism on a microphone.

Despite the opposition, the Pro-Life Generation stood strong while shouts and condemnation roared from the pro-abortion groups. SFLA made their pro-woman and pro-life messages loud and known. An elderly lady who supported abortion even told SFLA she liked what messages they were spreading.

SFLA shared resources and information on Standing With You, even as radical pro-abortionists revealed the extent of their extremism by saying a child could be killed up to one year old. In contradiction to their own words, the pro-abortion group then chanted, “A baby’s not a baby until it comes out.” It’s clear that these groups are woefully misinformed and are spreading dangerous rhetoric—making SFLA’s presence at such rallies even more vital.

To learn how to better address difficult conversations and defend your pro-life stance, click HERE.