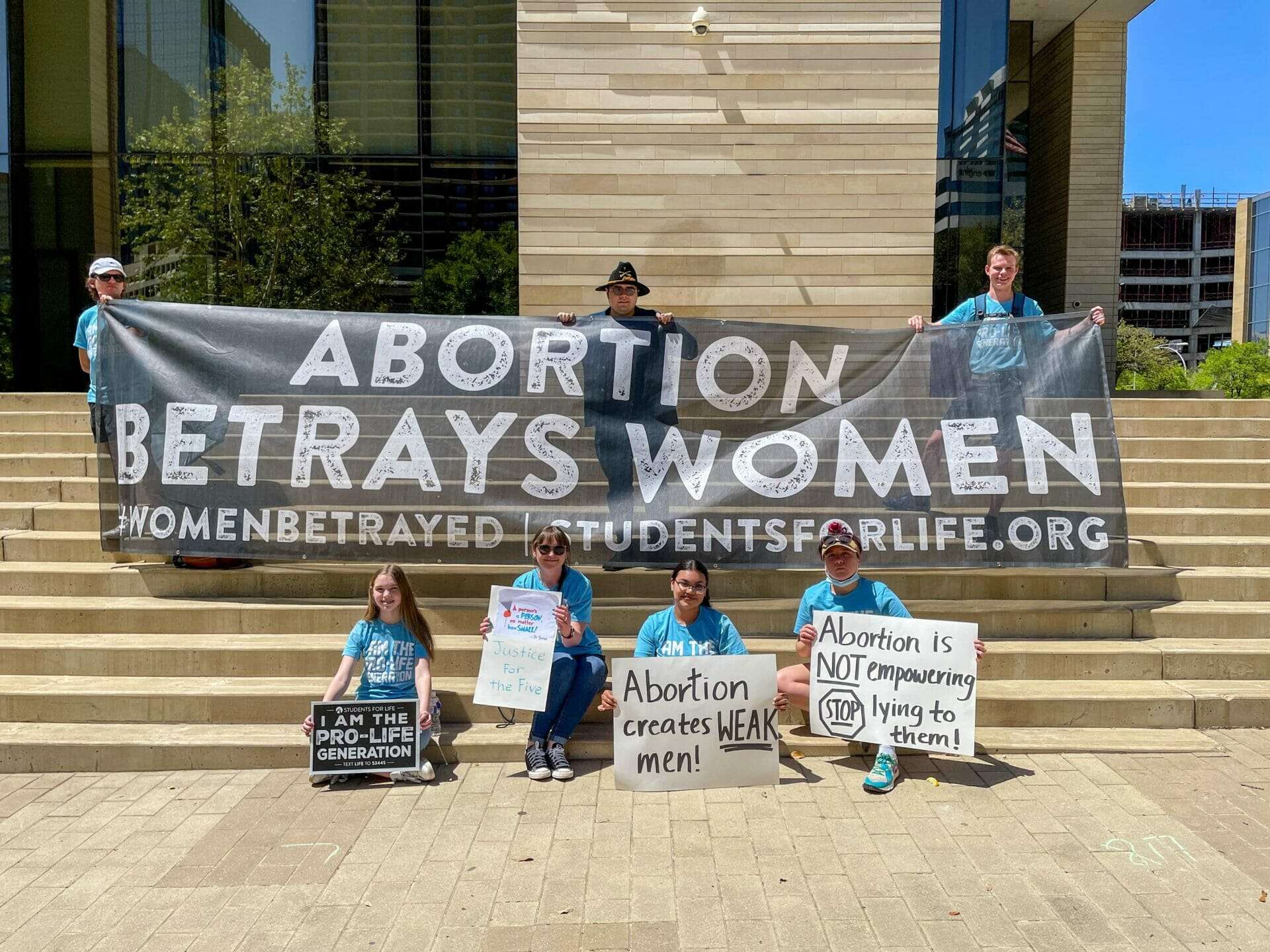 When Students for Life of America (SFLA) student leaders from Texas State University arrived at the Republic Square in Austin to counterprotest the “Rise Up 4 Abortion Rights” rally on April 9th, we were welcomed by the abortion lobby with vulgar language and personal attacks against our character—should we expect anything different from the supporters of an industry that profits off the murder of vulnerable women’s children? Their violent and dehumanizing behavior was right in line with their support of abortion and totally out of line in a civil society. Here’s what happened:

The self-proclaimed feminists of “Rise Up 4 Abortion Rights” began to harass us by singling out our SFLA male students and shouting at them hysterically—but they weren’t happy with our pro-life ladies, either. Before we could even finish setting up our banner that read “Abortion Betrays Women,” women were screaming that they had had an abortion, and they were proud of it.

Regardless of the hysteria around us, our SFLA group didn’t provoke or initiate any aggressive conversations. Instead, we held our pro-life signs proudly for all to see that abortion was not healthcare; rather, it’s anti-woman. It wasn’t long until the abortion supporters lined up in front of our banner with their signs to block our message. This is a common tactic of the abortion lobby, as they don’t want the truth to be shown.

The abortion supporters continued their rampage as they roughly interrogated a 12-year-old child who was standing for life by counterprotesting with her mother. Among other inappropriate questions and extreme profanity, the abortion supporters were grilling the young girl about what would happen if she got raped. I quickly interjected in order to end the interaction. It is very disappointing that the abortion supporters lacked the decency not to bully a young child or spew vulgar words and gestures towards our group.

Furthermore, when an abortion supporter shared her story with me, I listened to her even though SFLA and the Pro-Life Generation aren’t usually afforded that same respect. After listening to her, I assured the woman that we were not there to invalidate her experience or condemn those who had abortions.

In fact, I shared that our hope and our focus was to reiterate that abortion is failing women and that they deserve better. The pro-life movement doesn’t believe women should have to choose between their child and their career, their education, or their other children. Our message has always been that women need support and empowerment—not abortion.

The sad truth is that many of the post-abortive women who were yelling at us weren’t truly yelling at us. It was evident that they were dealing with visible hurt from the impact their abortion had on them. My heart breaks for all the women who may not get the help they truly need after their abortion, as we know the abortion lobby refuses to admit that abortion can be both mentally and physically harmful for women. It is a vicious cycle.

My hope is that many of the abortion supporters went home that night and reflected upon our words and their actions towards us. I am extremely proud of the level of maturity and focus that our SFLA group maintained despite the difficult circumstances. No matter what the abortion lobby threw at us, we remained calm and compassionate. Being pro-life means being pro-truth in love.