Speaking at the Ireland March for Life; A Different Country with the Same Life-Affirming Goal 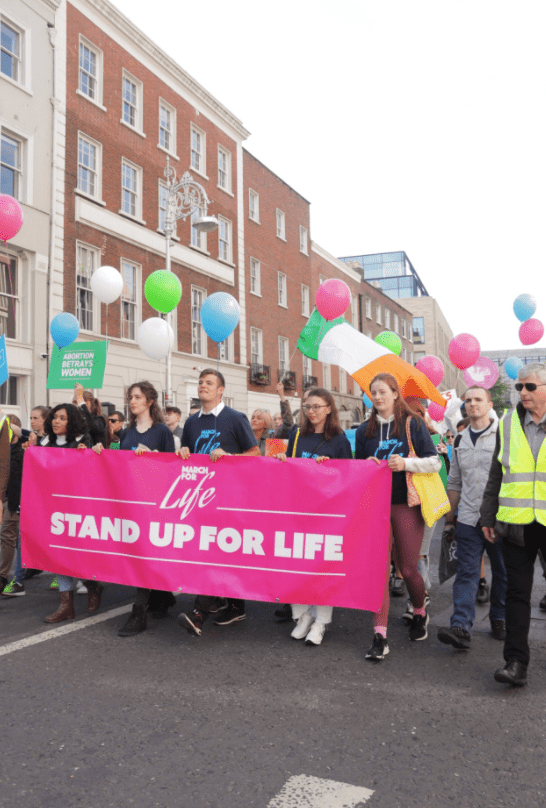 GUEST POST: Since the reversal of Roe v. Wade, we have clearly seen how the Dobbs v. Jackson decision has affected our country. However, it wasn’t until I traveled to Ireland to be the keynote speaker for the Dublin March for Life that I realized it has not only affected us but the whole world.

In 2018, Ireland passed a law through a public referendum which legalized abortion, devastating the pro-life community. Ireland had always been looked to as an inspiring example of a pro-life country, but now they are at the beginning of their fight to undo the laws that took away the human rights of preborn children. After I spoke at the event, dozens of people came up and told me that they saw the reversal of Roe v. Wade as a hopeful encouragement to keep fighting in Ireland.

As we know, the abortion industry is relentless and always uses the same strategy. When they want to see abortion legalized and normalized, they know that they cannot come out honestly and say, “We want women to be able to kill their babies up to birth for any reason!” Instead, they must start small and slowly chip away at culture.

They use their smoke and mirrors. It starts with, “We need abortion for medical emergencies.” Once the culture accepts that lie, they say, “Well, we really think abortion should be safe, legal, and rare.” That turns into, “We want abortion to be safe and legal.” Eventually, as we know, that becomes, “We want abortion legal,” point blank.

Abortion advocates want us to play defense so we must play offense. They may have been able to pass a law in Ireland, but they cannot change the culture that has been built up for decades. Life will triumph over death, and we will see abortion abolished in Ireland, as well as in the United States.

It was such an honor getting to share our mission at Students for Life of America (SFLA) with thousands of pro-life advocates that attended the Dublin March for Life. The pro-life presence is strong and growing, and one thing we know for sure is that life will always triumph over death, even if it takes almost 50 years.

For years, people thought we were crazy for saying we would become the first Post-Roe Generation — and yet, on June 24, 2022, that is exactly what we became. We would not have been celebrating if pro-life advocates in 1977 thought, “It has been 4 years. We are never going to undo this, and there is no point in fighting.” Pro-life advocates across the world must refuse apathy and continue to fight until elective abortions are not only illegal but unthinkable everywhere.

Something in particular stood out to me in Ireland. When the pro-life march took place, the bystanders looked shocked. They were quiet. It was the quietest march I have ever been a part of, and I believe that is because Ireland has not had decades of legal abortion as the United States has. Instead, Irish pro-life advocates are now having to find their voice and decide how they will fight this fight.

Many do not understand the zeal and passion that is in the hearts and minds of people who are against abortion. I am sure that many of the people in Ireland felt that the new law legalizing abortion was simply just “keeping up with the times.” They just assumed that abortion should have always been legal and will stay that way — but then the United States decided abortion was not a constitutional right. Now, people around the world are more watchful. Abortion is not a sign that you have a modern society. Abortion is actually a sign that culture is failing women and families.

I felt so honored to be there in Ireland with people willing to march and speak up for the preborn children of their country. My heart is with them in this fight. My prayers are also with them. It was a moment I’ll never forget when I taught them the chant I’ve yelled thousands of times in America: “We are the Pro-Life Generation, and we will abolish abortion.”

It’s true. We will end abortion; in the United States, in Ireland, and all over the world.