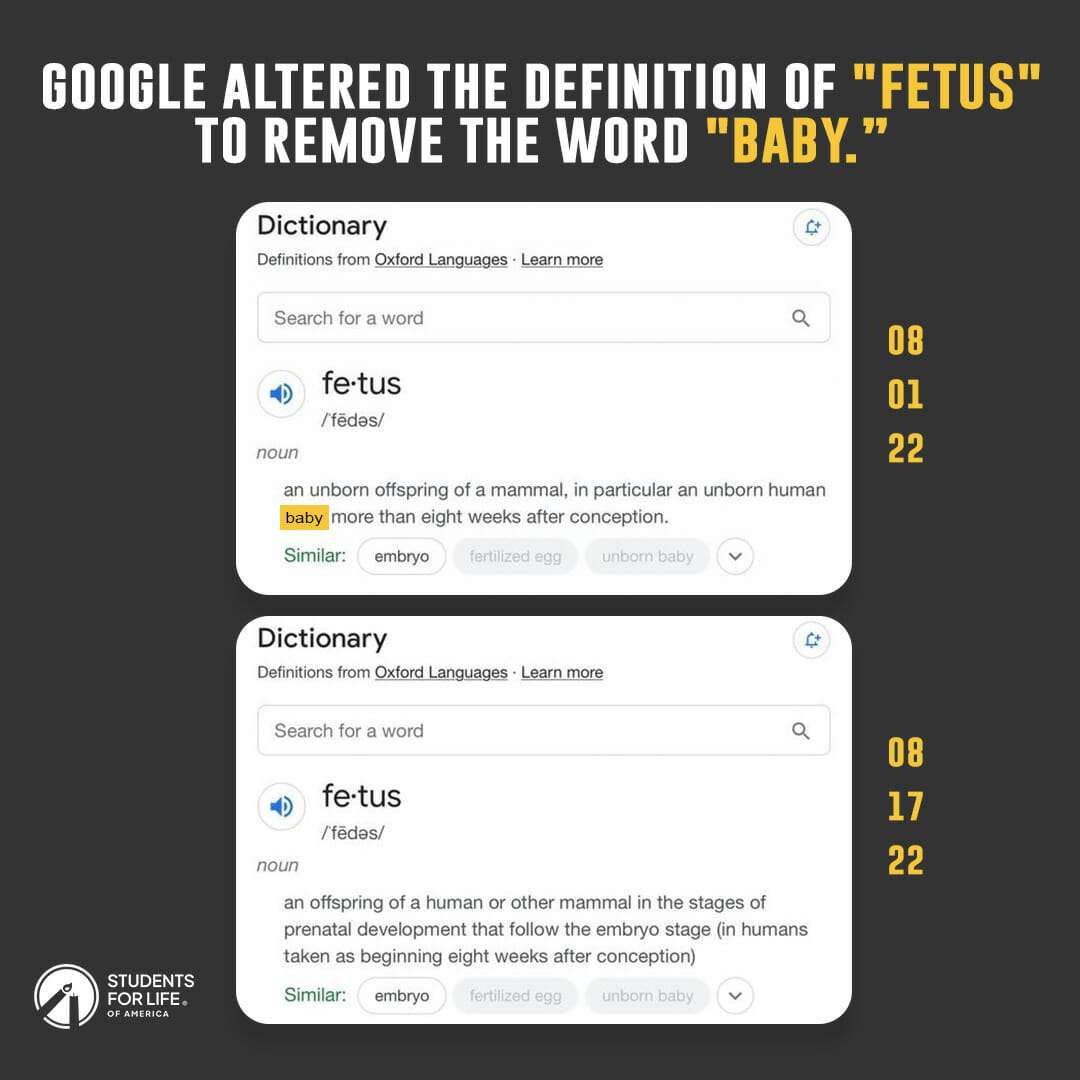 With the pro-life movement consistently winning, the abortion lobby’s  ship is sinking and their strategy to stay afloat keeps getting dirtier and dirtier. As an apt example of their shady scheming, Google recently changed the definition of “fetus” in a way which seems only intent on supporting the pro-abortion narrative. While this isn’t necessarily surprising considering misinformation is how the abortion lobby rolls, it is still appalling to see just how low their ethical standards are. Here’s what happened:

Just a few weeks ago, Google defined the word “fetus” as “an unborn offspring of a mammal, in particular an unborn human baby more than eight weeks after conception.” The key word in that definition is “baby” because many in the abortion lobby refuse to concede that a preborn child is indeed a child.

What are they so afraid of exactly? People might recognize the personhood of a preborn child and see the inhumanity of abortion. That’s why the abortion lobby’s objective is to remove the image of a baby from people’s minds so committing abortion becomes morally simple. Therefore, speaking of the preborn as a “clump of cells” or withholding the word “baby” helps their case.

Pro-abortion Google must have picked up on their narrative fail because they just changed their definition — and surprise, surprise: the word “baby” isn’t there anymore. Now, the definition reads: “an offspring of a human or other mammal in the stages of prenatal development that follow the embryo stage in humans taken beginning eight week after conception.”

This is blatantly agenda-driven, and Google’s intent is clear: they don’t want you to know that a human fetus is a human baby. Whether Google wants to admit it or not, however, this subject is just not debatable. Let’s break this down:

The word “baby” means “a very young child,” and a preborn child certainly fits that description. The word “fetus” is a Latin word which means “unborn child.” The two words look eerily synonymous — and get this: it’s because they are. Listen to Students for Life of America (SFLA) President Kristan Hawkins go over this topic with a student and crush this pro-abortion “logic” below:

Additionally, while a preborn baby is a precious life worthy of protection from conception, here is some context on how an eight-week-old baby (or fetus) has developed:

This isn’t the first time the abortion lobby has used misinformation to try to win the abortion argument. Between their myth that pro-lifers want to prosecute women, their lie that doctors need to be trained on abortion in order to manage miscarriages (says who?), and their redefinition of ectopic pregnancy treatment (no, the science never changed), the abortion lobby is up to their ears in false propaganda.

The redefinition of “fetus” is just another example of baseless, pro-abortion arguments — but that also means it is another instance in which the Pro-Life Generation needs to stand up and tell the truth. A fetus is a preborn baby, and no matter how many times the abortion lobby tells us differently, that won’t change the facts.

READ NEXT: Valuing Abortion Over Athletes? Questions for USA Gymnastics