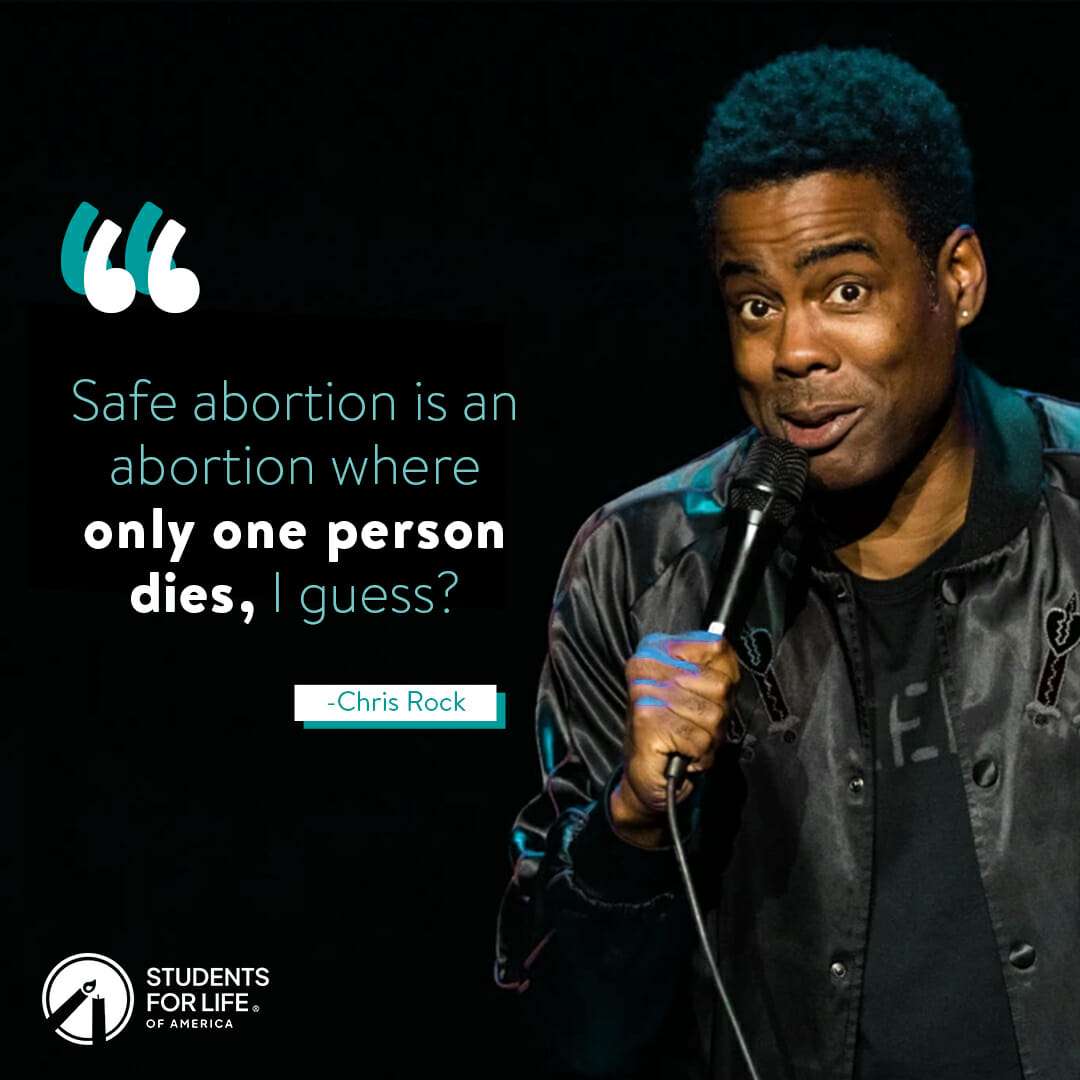 Hollywood is in an uproar after a recent comedic performance by Chris Rock included a bit on abortion in which he seemingly made fun of the abortion industry. In a business where his celebrity peers typically sing the praises of abortion, everyone is asking the same question about the comedian: Is Chris Rock really pro-life? Let’s examine the evidence so you can decide for yourself:

Rock Questions the “Safety” of Abortions:

At his most recent show in Atlantic City which sparked controversy over his abortion stance, Rock made fun of the popular myth propagated by the abortion industry that abortions are safe. Showing the ridiculousness of this notion, he said, “[A] safe abortion is an abortion where only one person dies, I guess?” Clearly, Rock is making the correct point that abortions can never be considered safe since the intention is always to kill a preborn baby.

(And abortion isn’t safe for a mother, either by the way—read more on maternal abortion risks HERE.)

He Said He’s Not Pro-Choice…Sort Of:

At the same show, Rock also claimed that he was not pro-choice. Instead, he joked that he was “pro better choice,” asserting that women should be choosier with the men they sleep with as their decision may result in the creation of a child.

In a different comedic bit, Rock also sheds light on the true colors of pro-abortion men who like to use abortion as a get-out-of-responsibility free card. He joked that he liked to pick up women at abortion rallies because he knew that they would be sexually active and open to aborting the potential consequences of their sexual promiscuity. Rock hits the nail on the head with his analysis of men who support abortion solely for the purpose of selfishly using this inhumane practice for their own personal gain.

(To read more about how America needs pro-life men, click HERE to read a Townhall op-ed by Students for Life of America Staff Writer Caroline Wharton entitled, “All I Want for Christmas is Pro-Life Men.”)

In another bit, he also seemingly calls out the abortion industry for desensitizing women to the horror of abortion as he paints a verbal picture of women flippantly choosing to abort.

Rock joked, “When a woman gets pregnant, it’s a choice between the woman and her girlfriends. One girlfriend goes, ‘Child, you should have that baby—that man got some good hair…’ And the other girlfriend says, ‘Child, why we even talking about this—ain’t we supposed to go to Cancun next week? Get rid of that baby!’ And that is how life is decided in America.”

Rock’s point is illustrated by abortion vendors like Planned Parenthood saying to the public that “everyone has their own unique and valid reasons for having an abortion.” This kind of mindset allows abortion to be used whenever and for whatever reasons—but in actuality, there is never a good reason to abort. (And if you think rape and incest count as acceptable reasons to abort, click HERE to learn why that’s not the case; two wrongs don’t make a right.)

What Do You Think: Is Chris Rock Pro-Life?

While he hasn’t publicly made his stance on abortion known, all signs seem to lead to maybe. Rock truly does recognize some of the problems with the abortion lobby, and we do pray that his poignant comedy will plant some pro-life seeds in his listeners, regardless of whether that sowing is intentional or not. Rock is always welcome in the pro-life movement, but for the meantime, we’ll enjoy listening to him roast the abortion lobby. Keep it up, Chris Rock!

READ NEXT: These Lizzo Abortion Quotes Sure Don’t Seem Like Women’s Empowerment