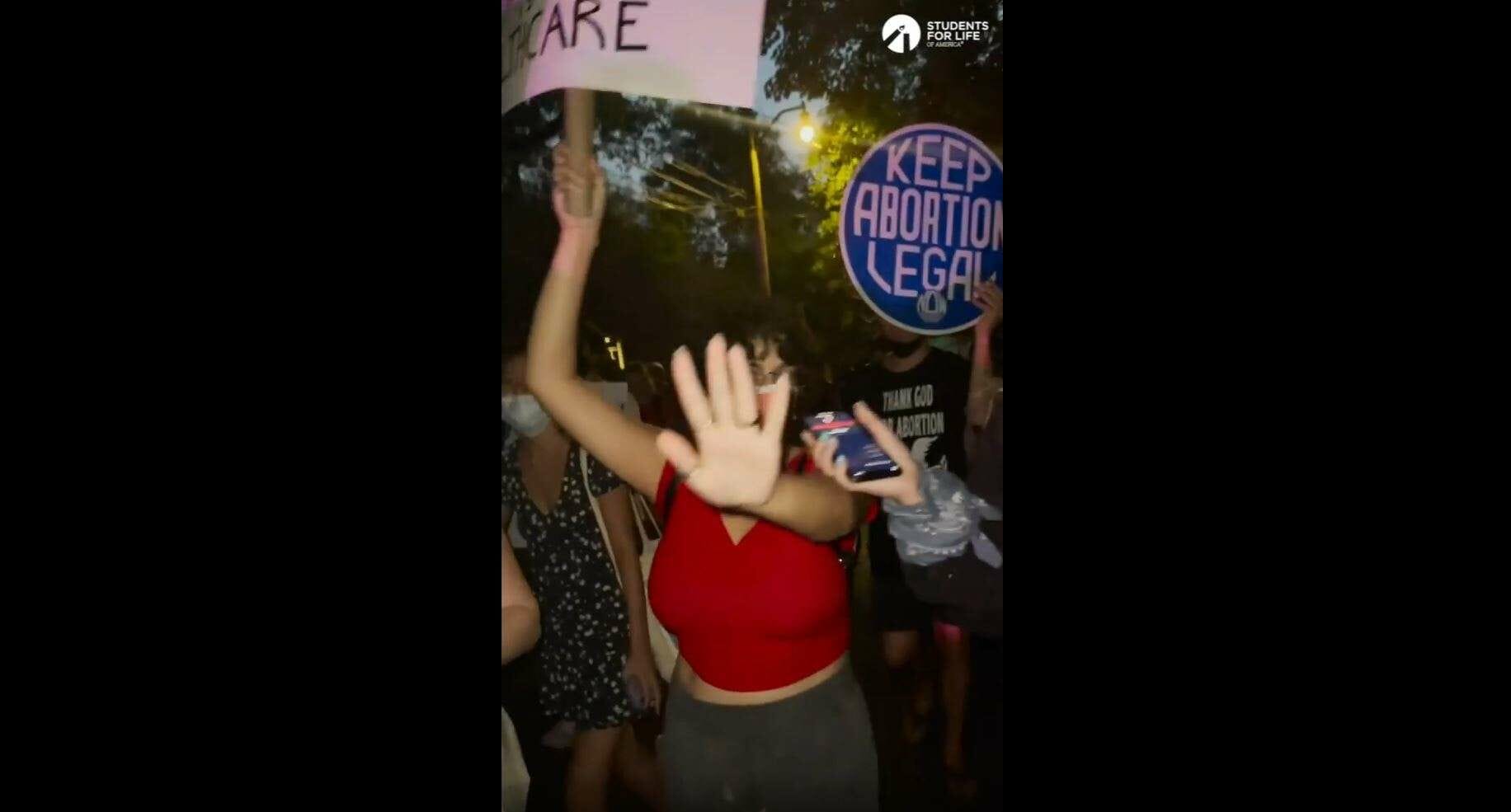 Abortion supporters, enraged that the Supreme Court opted not to block Texas’s Heartbeat Act which went into effect on September 1st, recently descended upon the private home of Justice Brett Kavanaugh with an unpermitted and noisy protest. Kavanaugh, who has a wife and two young girls, was among the five Justices who voted not to block the pro-life law.

Two courageous women in the employ of Students for Life of America (and local to the D.C. area), Anna Lulis and Elizabeth Nogueras-Rivera, decided to pay the protest a visit and see what the abortion supporters had to say. The response was shocking. Watch the video below…

A post shared by Students for Life of America (@studentsforlife)

The two pro-life women were met with hostility from the pro-choice crowd who preferred to yell instead of conversate. Most of the protesters chose not to engage with Lulis and Nogueras-Rivera, stating that their negative response was because they were pro-life. One male protestor, when asked if he would like to have a conversation with them, physically shoved Lulis and said, “No, get the f*ck away from me.”

It is fully inappropriate to go to someone’s home and threaten them. It is just as inappropriate to physically assault someone you disagree with. But are we surprised? No. People advocating for violence (abortion) have no problem threatening and committing violence.

Unable to talk with the majority of the protesters, three did consent to a conversation. Their answers showcased a common lack of scientific knowledge about fetal development and abortion. In fact, none of the protesters really seemed to know anything about abortion.

The first protester’s reasoning for being against the Texas Heartbeat Bill was that she knew a lot of people who didn’t know they were pregnant before 10 weeks and didn’t believe “they should be penalized for a choice they didn’t know they had to make yet.” When questioned as to when a heartbeat was detected in a baby, she replied, “Depends on what doctor you talk to, and I don’t think it matters.” Begging the question of what indeed matters then, the protestor stated that an indication of life was when the baby was out of her body. “It really depends on the person and every person should make that choice for them. I do think it [human life] is subjective to the person carrying that human life.”

The second protester explained that she actually used to work with Brett Kavanaugh, and she knew that “he wasn’t fit for office.” Additionally, she stated that the way the Texas legislature passed the Heartbeat Bill was wrong and “wasn’t democracy.” She also echoed the disturbing and biologically inaccurate sentiment that birth was an indicator of human life. “Because a baby is either born alive or it’s not…I don’t know, I think it’s a personal choice,” she shared.

While her subjective statement mirrored the former protester, this woman went on to an even more interesting comment, claiming to be pro-life herself, even as she marched in a pro-choice protest. “I’m pro-life. I think everybody is pro-life, only serial killers are not pro-life…it’s not anybody’s business. It’s up to a woman and her doctor.”

Another protester interrupted, accusing Lulis of being “brainwashed about her body” and, strangely, asked her what she ate. Lulis tried valiantly to steer the dialogue back to the subject of abortion, asking basic questions. Unable to answer Lulis’s questions about when human life started and the age of viability, the protestor instead stated she believed that the most important thing was to pass the Infrastructure Bill (HR 3684), universal healthcare, a universal basic income, and free education. When Lulis responded that this was irrelevant to the abortion issue, she was called a “racist, sexist, homophobe.”

When the protesters were not shoving, cursing, or dodging Students for Life’s questions, they were chanting for the resignation of Kavanaugh and calling on women to “be their own abortion doulas.” Doulas are birth workers who give pregnant mothers guidance and support during the months before childbirth, during labor, and post-birth assistance. An “abortion doula” is a sick perversion.

Some protesters were members of the the same pro-abortion activist group, Reproaction, that recently hosted a teach-in on “self-managed abortion” on the steps of the Supreme Court. Students for Life of America crashed that party as well.

The protesters’ purpose was to threaten and “intimidate the judiciary, and anyone who disagrees with the radical agenda” stated Republican Senator Charles Grassley in a Judiciary Committee hearing. Democrat Senators, Richard Durbin, and Patrick Leahy, agreed that the mission of the protesters was to “intimidate Kavanaugh’s family” while the proper venue for disagreement was in court or at the ballot box.

Students for Life is unafraid in our support of Justice Kavanaugh. In 2018, when Kavanaugh was waiting confirmation for his Supreme Court seat, Students for Life held a #JusticeforLife tour in support of him. When he was confirmed as a United States Supreme Justice, we were clear in our approval. Wherever there’s an opportunity to stand for preborn life, we will be there.