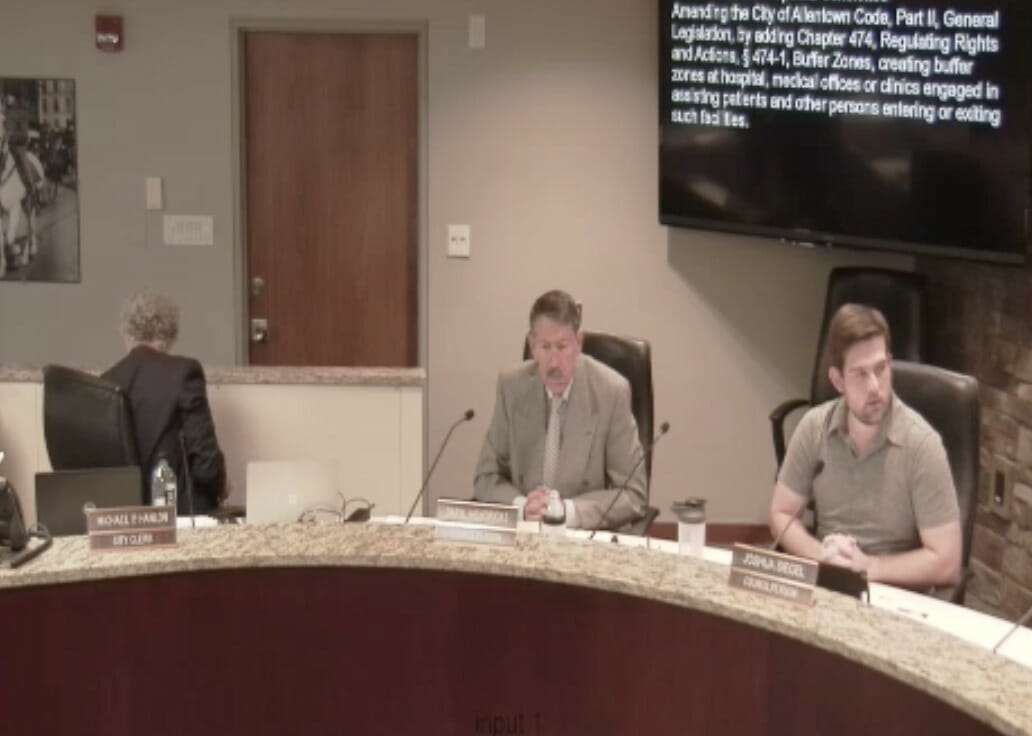 Our bingo card for tone-deaf and medically inaccurate claims is filling up quickly. When Pennsylvania City Councilman Joshua Siegel addressed an August meeting on abortion-related city ordinances, he gaslighted vulnerable women in the room by claiming there isn’t regret or medical suffering after committing an abortion all while advocating for policies that push life-affirming resources out of the community.

“Post-Abortion Syndrome is not a real, actual medical condition,” were the Councilman’s exact words to support his belief that women of Allentown need abortion rights ordinances. There’s nothing right about killing a preborn baby and leaving a woman hurt sometimes medically, but frequently emotionally and mentally – after all, that is what the abortion lobby sells a lot of.

While Planned Parenthood and other abortion industry leaders refuse to recognize Post-Abortion Syndrome (PAS) as a valid condition that a woman may experience following an abortion, the reality is that many psychologists and doctors do recognize the stress, emotional pain, and physical pain that often follows an abortion. Councilman Siegel is not a physician but a career politician placing his agenda above the real feelings of women shared bravely during the Allentown City Council meeting.

Post-Abortion Syndrome is a form of Post-Traumatic Stress Disorder (PTSD). PTSD often occurs after an individual has suffered an event so stressful and so traumatic that this person is unable to cope with this experience in a normal manner, including being able to express feelings they may experience. The symptoms of PTSD (including PAS) vary from case to case, and sometimes, these reactions may not arise until years after the event, making it sometimes difficult to identify.

A meta-analysis published in 2011 in the British Journal of Psychiatry prepared by Dr. Priscilla Coleman combined the results of 22 studies which found 81% or women with abortion experiences were more likely to suffer from mental health issues. The meta-analysis included data on 877,181 women from six different countries, conducted between 1995 and 2009. This research also found that the women who had abortions, rate of anxiety were 34% higher as opposed to women who had no abortion experiences, and that depression among post-abortive women was 37% higher. In addition, this study revealed that women who had abortion experiences were 110% more likely to struggle with severe alcohol abuse, marijuana use increased 230%, and a 155% increased risk of suicide.

According to Councilman Siegel, these aren’t “real” medical conditions.

Furthermore, if ordinances 60-61,60-62, 60-63, and 60-64 passed and Councilman Siegel gets his way, the city would unjustly impose a 15-foot buffer zone regulation that would prevent sidewalk counselors from assisting women and families seeking prenatal care away from abortion facilities.

Students for Life of America (SFLA) frequently participates in sidewalk counseling as part of its campaign for Abortion Free Cities. Staff and volunteers compassionately meet women and families where they are as they grapple with unexpected pregnancy and offer life-affirming resources so we’re not letting the Councilman’s remarks go unanswered.

This is not the first time SFLA’s sidewalk counseling has been under attack with the threat of buffer zones which serve to push out pro-life voices and tell women their best option is abortion. In the past, pro-life groups have challenged buffer zones and the obstruction of free speech in court with a huge win in Jackson, Mississippi where the city of Jackson repealed unconstitutional buffer zone ordinances that restricted free speech outside of abortion vendors.

Allentown’s proposed ordinances would violate Pregnancy Health Organizations’ first amendment rights as it would accuse them of engaging in “deceptive advertising” since they do not commit abortion but instead educate women about the realities of the procedure.

If passed, the ordinance would instruct city authorities to withhold their assistance from any out-of-state criminal abortion investigations without a court order, which could cause undue hardship to women who have already suffered harm at the hands of an abortionist. Lastly, if any law limiting elective abortions is passed in Pennsylvania, it will be undermined by an order to the police department to “de-prioritize” implementation of the law.

It’s time for the abortion industry and the politicians who are swimming in their pockets to understand that the Pro-Life Movement will not standby as they gaslight women who have suffered severe emotional trauma from their abortion experiences. CLICK HERE to send Councilman Siegal a message for his callous words and urge him to apologize for gaslighting women who have experienced Post-Abortion Syndrome.