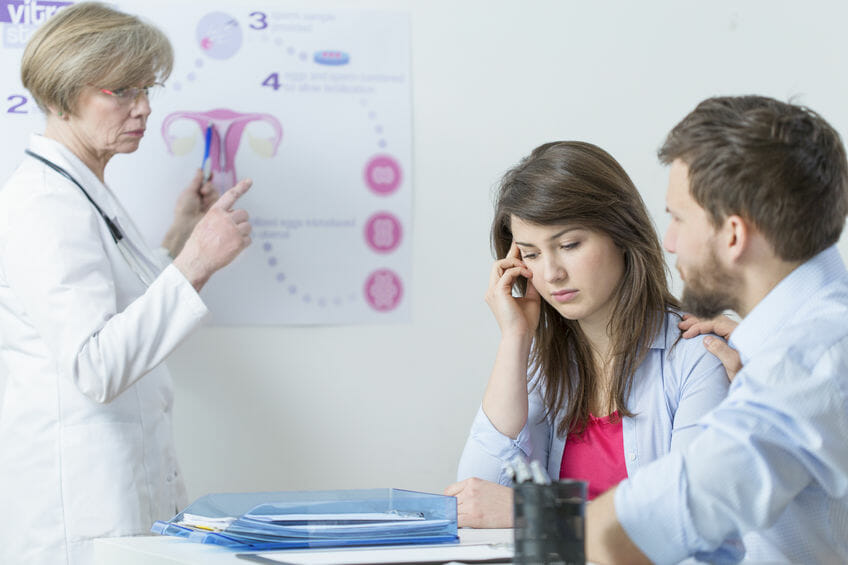 This week, Forbes posted an article attempting to make the case that induced abortion does not have an adverse affect on women’s fertility. Problem is, there’s a lot of evidence contrary to this premise. And this isn’t the only alarming point made – the author also cites that 61% of unintended pregnancies globally end in abortion. Can that possibly be true?

The very first sentence of this article points out that “abortions are recognized as a human right by the World Health Organization.” Anyone who says this is a human right is already starting at a loss when trying to convey research that should be taken seriously. But let’s, for sake of argument, ignore the attempted justification for taking human life here.

When you’re considering having an abortion it’s totally natural that you’d think about your fertility in the long run. And the short explanation is that there’s no evidence that would suggest that either a medical or surgical abortion causes infertility when done in a safe setting. The World Health Organisation estimates that 25 million unsafe abortions are performed worldwide each year and this can be a massive risk to not only the mother’s fertility but their life. When abortions are performed in a professional, clinical setting they have very few risks attached.

Pay special attention to the citations here. So, Planned Parenthood, the biggest abortion vendor in the United States, AND the pro-abortion World Health Organization who claims abortion is a human right are both willing to suggest that abortion is safe and wonderful? That is shocking.

Those Who Beg to Differ:

How Does Abortion ACTUALLY Affect Fertility?

Let’s talk about the reality of surgical abortion. The basic method entails using instruments to artificially dilate the cervix so that the abortionist has access to the uterus. How he/she will kill the child depends on the gestational age (younger and smaller children can be suctioned out with a cannula and aspiration machine, whereas older ones must be dismembered with a curette or forceps or injected with digoxin and delivered “traditionally”).

Either way you look at it, whether you accept the preborn as a valuable human being or not, the process is violent. And the tools are violent.

Curette (a curved, looped knife) and forceps (serrated and designed to hold on and not let go).

The artificial dilation process that must occur to be able to get these instruments into the uterus is not gentle. Just ask the women who have undergone surgical abortions. The abortionist uses a series of metal rods (or seaweed sticks called laminaria, in some cases) to pry open the entrance to the uterus. This is one major way abortion can cause future fertility problems, namely, cervical incompetence. Being unnaturally forced open can affect the cervix’s ability to stay properly closed during subsequent pregnancies. This is especially true if a mother has undergone a late-term abortion or multiple surgical abortions at any stage.

Other physical risks of surgical abortion that can affect fertility include:

When an abortionist has completed a surgical abortion, he/she finishes up by scraping the curette blindly all around the uterine walls to make sure no parts of the baby or placenta are left behind (which can cause deadly infection). Blindly scraping a knife around the uterus can scar and damage it, affecting future pregnancies.

Another serious physical risk is perforation of the uterus or other organs, which commonly occurs via the aspiration machine. Suction machines used for abortion are about 29 times more powerful than a standard household vacuum cleaner, and if that suction is inadvertently directed towards the uterus, it can “perforate” (tear a hole in it) as well as neighboring organs. This could necessitate a hysterectomy (complete removal of the entire uterus) or other major corrective surgeries.

In 2019 in Illinois, a state infamous for its pro-abortion environment, the March of Dimes gave a D+ rating to Chicago for notably high preterm birth rates, relative to the rest of the country. The report noted that the preterm birth rate amongst African American women in Illinois was 52 percent higher than all other Illinois women.

“It is no surprise that Illinois and Chicago have a preterm birth problem – because Illinois and Chicago have an obvious abortion problem,” said Mary Kate Knorr, then director of Illinois Right to Life. “Abortion procedures do irreversible damage to a woman’s uterine wall and cervix, drastically increasing the likelihood she’ll experience future miscarriages or preterm delivery. Who can be surprised that women struggle to sustain their pregnancies, when Planned Parenthood and other abortion providers in our state are willfully ending pregnancies by the tens of thousands every year? In fact, I’d like to hear from Planned Parenthood. Are they not a women’s healthcare provider? What do they intend to do to address preterm births, which is clearly a major women’s health issue in communities across our state?”

A summary of published research on abortion and preterm birth is available at www.preventpreterm.com/studies.

But the Author is Referring to “Safe Abortions”

I once heard someone who used to work in the abortion industry refer to abortionists as “the bottom of the barrel in the medical profession; the ones who couldn’t make it anywhere else.” Anecdotal, of course. But interesting when you consider:

It’s no wonder that at least 437 women have been killed by legal abortion in the United States since 1973. More women have been killed following abortion’s legalization than before it. Most recently, an Alabama abortion facility killed a woman in May – never calling an ambulance, but rather sending her home to later die at a nearby hospital. At least 100 women were sent to the hospital from abortion facilities in 2019 alone.

227 abortion facilities in 32 states, including plenty of Planned Parenthoods, were cited for more than 1,400 health and safety deficiencies between 2008 and 2016, including hundreds of significant violations of state laws regulating abortion facilities. Students for Life honed in on Planned Parenthoods in 11 of these states during a display tour in 2019, spreading awareness about the horrendous infractions.

What About Chemical Abortion?

Chemical abortion currently makes up about 40% of total abortions – certainly not an insignificant percentage. They are done with a two-drug cocktail of mifepristone and misoprostol. The first starves the child of progesterone, a necessary hormone. The second stimulates the uterus to contract and pass the child and, ideally, all other pregnancy tissue. Watch how it’s done here.

Per the procedure’s effect on fertility, consider a recent report noting a  “peer-reviewed study from 2015 on the safety, efficacy, and acceptability of self-administered abortion pills through 70 days which showed that almost 30% of the 40 women taking chemical abortion did so after the FDA-approved time frame of 63 days. Very sadly, 62% of these women had incomplete abortions. Surgical evacuation was required for 68% of these patients, and 23% of these women had a failed abortion. For 12.5% of them, they received surgical evacuation with blood transfusion. The authors concluded that ‘unsupervised medical abortion can lead to increased maternal morbidity and mortality.’”

This is where chemical abortion is headed, should the abortion industry get their way. The abortion lobby is currently bullying the FDA into removing health and safety standards for the pills, despite evidence from studies like that above that there are dire consequences.

FINALLY… What about that 61% Number?

The Forbes article that initiated this piece claims that 61% of unintended pregnancies worldwide end in abortion (i.e. 73 million per year), according to Planned Parenthood’s Guttmacher Institute. This same pro-abortion firm also reported that an estimated 18% of pregnancies in the United States in 2017 ended in abortion.

If these figures are anywhere close to true, we live in a deeply wounded world, and other countries outside of the U.S. have a big abortion problem. Based on Guttmacher’s data, the highest rates of abortion are occurring in Africa, Asia, and South America, and mostly in middle-income countries. When the team at Students for Life first read this 61% statistic, the gut reaction was that it couldn’t possibly be true. Humanity couldn’t possibly kill over 73 million of our offspring every single year.

But there’s every chance it’s true. The actual total number of babies killed in the womb, either forced by government regimes or voluntarily by parents who don’t feel ready, throughout human history undeniably dwarfs any other loss of human life combined. And every single victim is innocent.