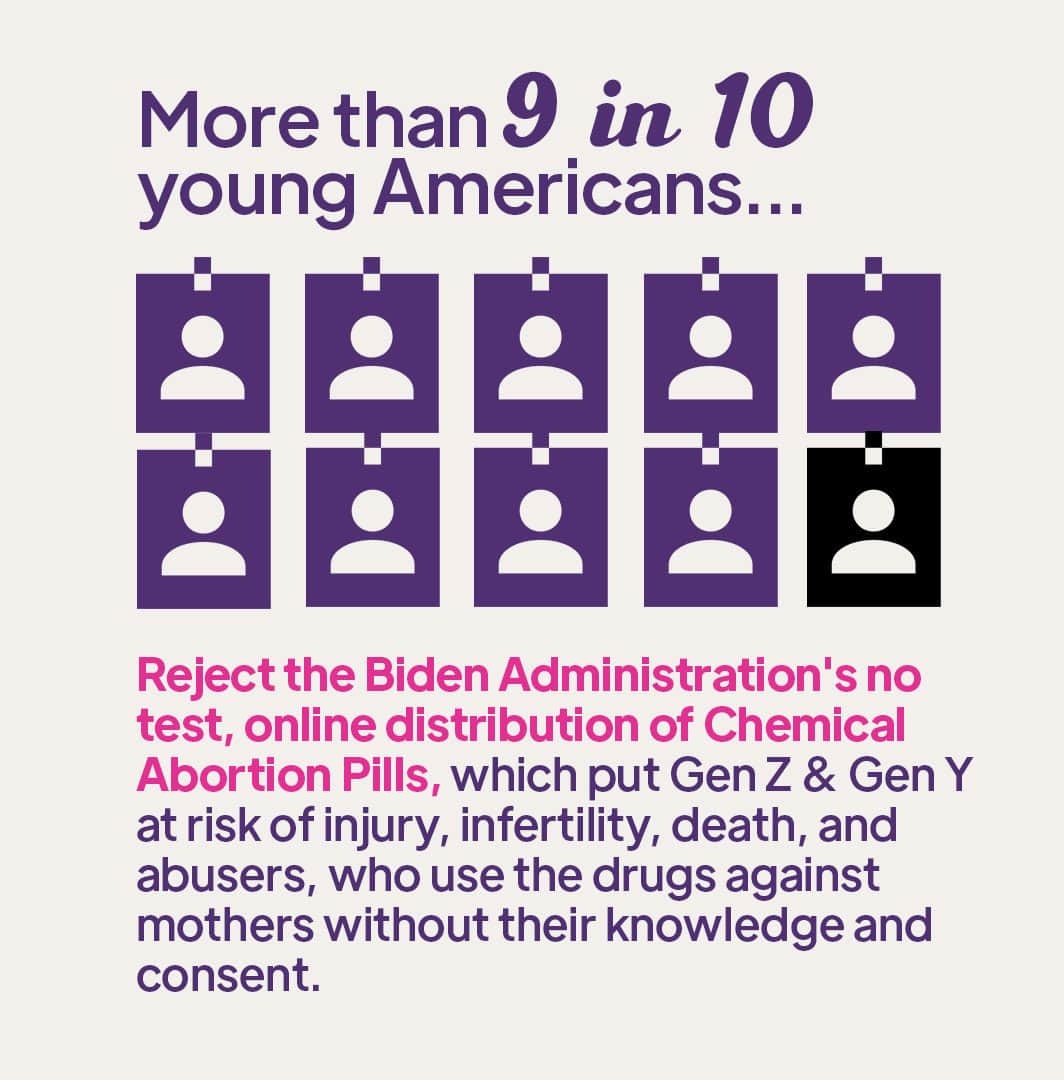 The abortion lobby likes to pretend that the pro-life movement is out of step with the times, but polls often say otherwise — indeed, one new poll is actually showing that many Americans are in agreement on the health and safety concerns surrounding Chemical Abortion Pills. This recent data shows a wide gap between public approval and the actions of President Biden’s Food and Drug Administration (FDA), as the FDA continues to endanger women through reckless distribution of these life-ending drugs. Here’s what you need to know:

A new poll done through YouGov-Vinea from Students for Life of America’s (SFLA) Demetree Institute for Pro-Life Advancement found that the majority of Gen Z and Gen Y overwhelmingly agree that Chemical Abortion Pills need to be more tightly restricted as support for blood tests and ultrasounds prior to a woman taking these pills is off the charts at more than 91% approval.

Poll participants supported protecting women from ectopic or later pregnancies via ultrasound technology prior to use of Chemical Abortion Pills in order to screen out these two dangerous possibilities. This is necessary as these drugs will not end ectopic pregnancies and become even more dangerous for women’s health later on in pregnancy as their efficacy declines (the FDA considers Chemical Abortion Pill use only “safe” through ten weeks gestation). An ultrasound determines the location and length of pregnancy — an answer for both of these important questions.

Support for blood test screening was even higher on this poll with the majority of participants wanting to protect women’s fertility through blood test screening. This screening is essential because 15% of the United States population has Rh-negative blood, and in an exchange of blood during birth, abortion, or miscarriage, antibodies can form in a woman’s body that, unless quickly neutralized, can sterilize her, as future pregnancies will be attacked. In order to treat this, a shot called Rhogam must be administered — and in order to know that this shot must be administered to preserve fertility, a blood test must occur.

Unfortunately, Biden’s FDA does not require blood tests prior to usage of Chemical Abortion, leaving women in the dark over whether their future fertility is in jeopardy. This is in direct contrast to the 92% which agreed that requiring blood tests is somewhat to extremely important, with 41% choosing extremely important.

Common Sense is the Common Wish

Clearly, our young voters approve of these informative, protectionary measures — so it is much too bad that the Biden Administration is acting expressly against their wishes. The FDA continues to drop common sense health and safety standards for Chemical Abortion Pills, and even as the body count of women from these life-ending pills continues to rise, the agency refuses to look into it. As an example, the FDA recently rejected a Citizens Petition from SFLA which called for a return to earlier regulations.

We will not be deterred, however, in our mission to protect women and the preborn from Chemical Abortion Pills — click HERE to find out more about how SFLA is fighting against these life-ending drugs.

Click HERE to read the rest of the poll report.