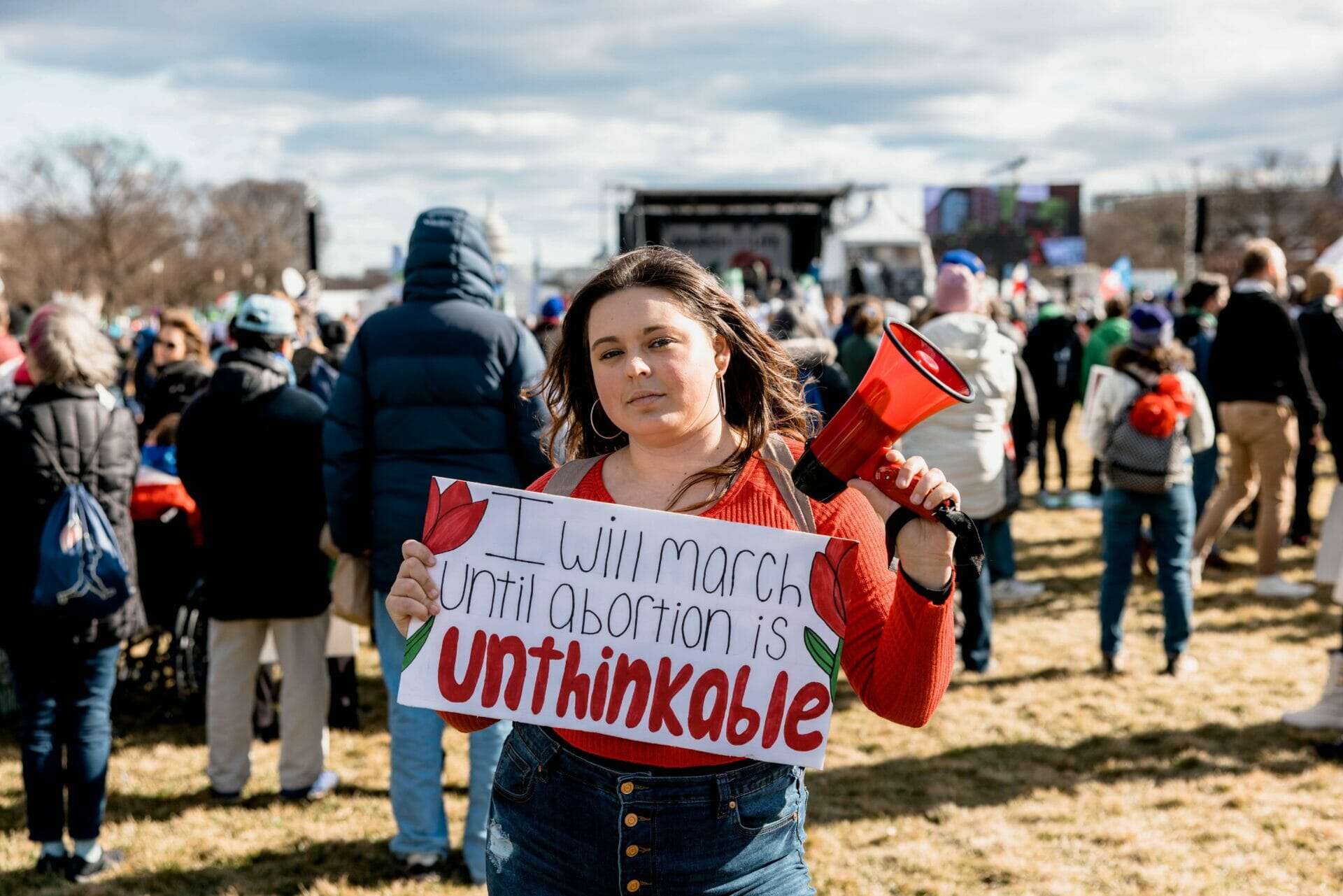 GUEST POST: As it’s been a historic year for the pro-life movement, the 2023 National Pro-Life March and Summit were very exciting this year — and it became even more exciting when a life-saving moment with a young mother actually occurred during the March. Here’s why I will never forget this first Post-Roe March:

Just before it began, I was standing on the National Mall handing out signs to pro-lifers that read “Post-Roe Generation” and “Protection at Conception.” As I worked, I noticed a young woman and her co-worker walking nearby. They were in uniform and clearly worked at one of the museums. As they came closer, one slowed her steps, making direct eye contact with me, and I understood she wanted to speak with me.

I made my way over to her, and she said, “I just feel like maybe this is a sign, you know?”

I wasn’t exactly sure what she meant, and I was surprised when she told me she had just learned she was pregnant a few days ago. She went on to tell me how she was trying to decide what she should do: have an abortion or keep her child.

The situation was really astounding when you think about it. Amid thousands of pro-life marchers that day, there was a young girl who was 19, pregnant, and had a life-changing decision in front of her.

I congratulated her immediately and asked her how she found out about her pregnancy. Her demeanor changed immediately to frustration — but not because of me.

The young woman told me when she went to the doctor to confirm her pregnancy, the only thing they provided her with was a pamphlet about Planned Parenthood, telling her to get an abortion.

She looked at me and said, “That’s the only thing they told me. They didn’t give me any other information at all. That’s not right, is it?”

I agreed with her that it wasn’t right and began discussing alternative resources with her. As we talked, the young woman told me, “I think I should at least try to do this. I want to do things differently for my baby and give it a chance at life. I can do this, right? All they’ve told me is that I’d have to give up on my dreams if I have this baby…but wouldn’t I still be able to accomplish them as a mom?”

I realized that she was looking for someone to be excited about the new life inside her and provide her with assurances that she could choose an option other than abortion. I encouraged her by telling her how strong she is and how her desire to be a good mom to her baby has already made her a good mom. The resources available to support her through her pregnancy and beyond would also help her accomplish that.

She was visibly relieved and kept nodding her head with a new sense of determination. Finally, she looked me in the eye and said, “This isn’t a coincidence that this is happening today, is it?” I grinned back at her and replied, “No, it’s certainly not a coincidence. This is for you!”

When she walked away with a new sense of determination and excitement, I stopped to reflect on what had just taken place, and I realized this is why I march. This is why I joined Students for Life of America (SFLA): to give women the assurance they need to be confident that abortion is not the answer. To let women know we are here to help them find the answers they need to become successful parents with programs like Standing With You, which connects pregnant women with real people who understand what an unexpected pregnancy feels like. People who know firsthand that peer-to-peer support can be priceless. People who empower women to choose both their child and their dreams.