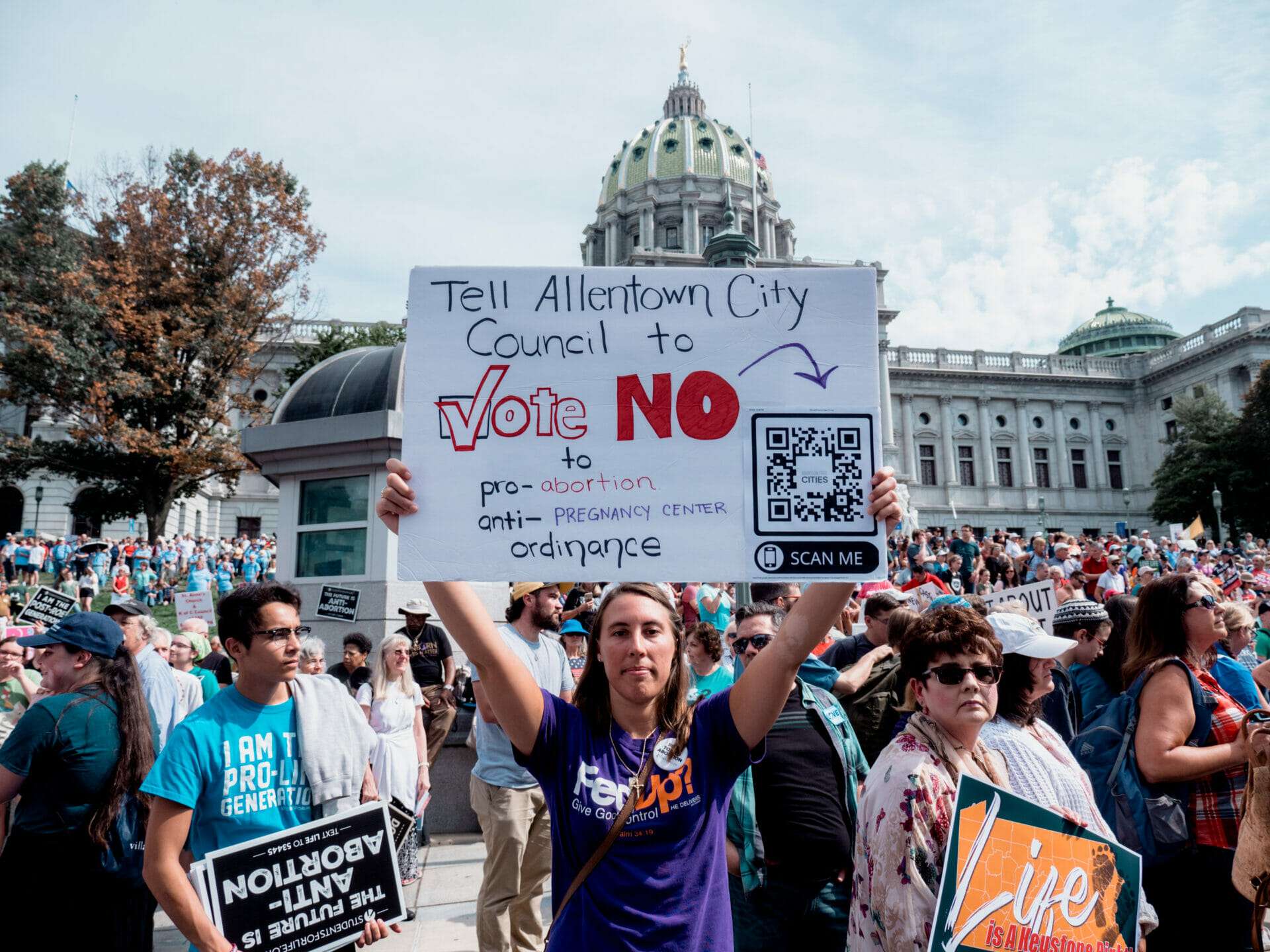 GUEST POST: As the Allentown City Council has been attempting to enact pro-abortion ordinances in spite of general community wishes, we are happy to see them making excuses for slowing down their pro-abortion propositions. As they gradually halt their agenda and make lame justifications for why they are backing down, the Pro-Life Generation and the Campaign for Abortion Free Cities (CAFC) knows the real reason: Allentown is pro-life, and we’re keeping it that way. If you haven’t kept up with our efforts in this city, here’s what happened:

The radical Allentown City Council introduced “abortion sanctuary” efforts that included stopping pregnancy resource centers from advertising in any form and banning pro-life sidewalk counselors from being on the sidewalk in front of Planned Parenthood through a 15-foot buffer zone. While these measures are both extreme and unconstitutional, they also do not represent the wishes of the Allentown community at large.

The pro-life community in Allentown is strong and diverse. I understand this as a community member myself who has deep roots in Allentown through my family and friends. As a good example of this, two Spanish speaking churches in Allentown collected several hundred signatures against these pro-abortion ordinances in short period of time, and that was just two churches. Can you imagine if more had done so?

In addition, when I have talked with community members in Allentown through my CAFC and Standing With You efforts, both pro-lifers and those who call themselves “pro-choice” have encouraged me to continue to spread information about pregnancy resource centers and StandingWithYou.org. Everyone agrees that women need more pregnancy resources, and multiple women have told me, “If I knew these resources were available at a pregnancy center, I may not have had my abortion.”

This summer, one woman told me she was raped and had an abortion when she was 19 years old. When we spoke with her about pregnancy resources, she said she would have chosen life had she known these resources were available. She regretted her abortion and wanted to reach out to a healing after abortion ministry we talked to her about. She is a clear example of how necessary it is to spread the word about such resources.

My team and I began spreading the word about these pro-abortion measures. We created a community petition against the city council ordinances, volunteered with the incredible Allentown Coalition at the Great Allentown State Fair (where they had 326 conversations, 48 changed minds, and 220 petition signatures), and held two prayer rallies prior to the city councilors meeting for these ordinances. We also sent more than 6,000 text messages to the community about the measures.

After being informed of these pro-abortion measures, the community of Allentown spoke up against them. On the days of the city council meetings and special meetings in which the abortion ordinances were talked about, women who chose life came to testify. These women had abortions scheduled at the Planned Parenthood in Allentown, but sidewalk counselors intervened, providing support and resources from the community. Had these sidewalk counselors not been present on the sidewalk, these women would have aborted their now living children. The 15-foot buffer zone, if already in place, would have altered the life of dozens of women and children who chose life on the sidewalk.

The president of Bright Hope Pregnancy Center also testified about support the local pregnancy resource center has provided thousands of women in the time he has worked at Bright Hope as this pregnancy center has been around for 40 years now.

After the Special Meeting, August 23rd, the City Council was set to vote for these ordinances on Wednesday, September 7th. However, September 6th came and went, and the City Council put off the vote to October 19th. They said it was due to the legality of the ordinances and whether they would stand up — but we know that it is because of the pressure from the pro-life community.

Leading up to the next vote date, we are going to continue to do what we’ve been doing —informing the community and mobilizing the Pro-Life Generation to stand up for life. Allentown will continue to be pro-life!

Caroline Wharton is a graduate of the University of North Carolina who serves the Pro-Life Generation as a staff writer and communications assistant.
Blog
Blogroll
college
Featured
Med & Law
Middle School
Uncategorized