Vote Union University to Receive the Christian Schools Standing With You Scholarship! 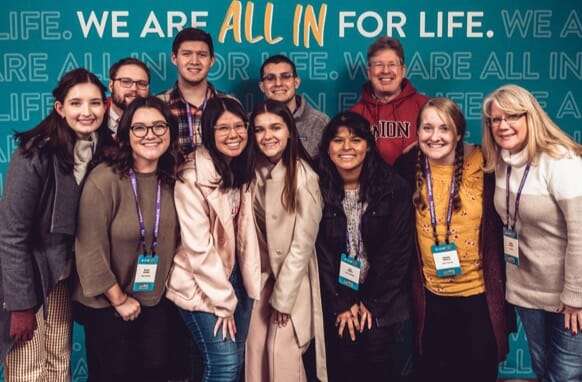 In December, 2021, Students for Life of America’s (SFLA) Demetree Institute for Pro-Life Advancement released its Christian Schools Project, investigating all 784 Christian schools across the country to identify any ties these Christian institutions have to the nation’s largest abortion vendor, Planned Parenthood.

It’s time to highlight the amazing pro-life efforts of students who attend Christian colleges and universities across America who are setting the standard for great Christian schools. These groups have a passion for helping pregnant and parenting students on their Christian campus, and SFLA wants to award them for their efforts—with your help! By evaluating each school’s friendliness and support for parenting students on campus, we have narrowed it down to our top ten school groups, and now it’s up to you to help us choose the winner.

Check out one of the schools that made it to the top ten below: Union University in Tennessee

Union University is one of ten student groups competing to be in the top three of all Christian Schools that will earn a scholarship for pregnant and parenting students on campus and an award for their group activities for the upcoming year.

Union University, a Baptist institution, was given an A-grade during the Christian Schools Project for not promoting Planned Parenthood to their students. The campus’s pro-life group, Life139, frequently partners with BirthChoice, an organization that ministers to pregnant and parenting women through sidewalk counseling outside a local abortion facility. They also regularly host educational events which train their members to be able to effectively minister to pregnant and parenting women. Life139 has existed on the campus of Union University since 2006 and now has 44 members.

Here are some accomplishments of the Union University group:

You can vote for this school to receive a $1,500 scholarship for a pregnant or parenting student on their campus and up to $500 to help their group activities for the upcoming year. Click HERE to vote for Union University (Tenn.)!

CAST YOUR VOTE BELOW!

Caroline Wharton is a graduate of the University of North Carolina who serves the Pro-Life Generation as a staff writer and communications assistant.
Adverse Diagnosis
Blog
college