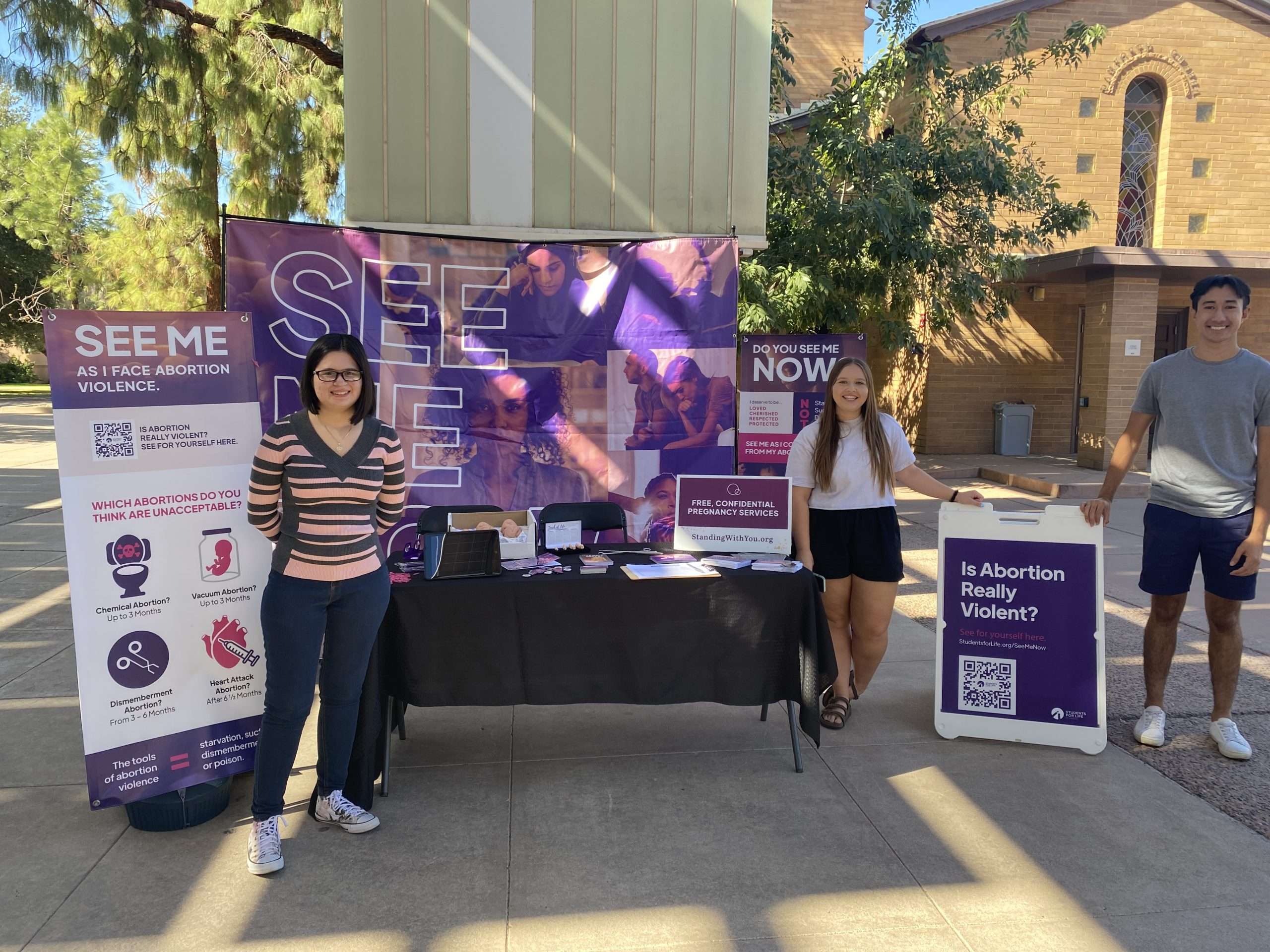 I brought the See Me Now tour to Arizona State University’s campus, and even though I had been nervous about my first tour stop, it exceeded all my expectations and was a huge success.

We came on a Friday, and, as any college student knows, Fridays are typically a slow day on campus—but my SFLA group and I worked the campus hard.

Our labors produced the following results: 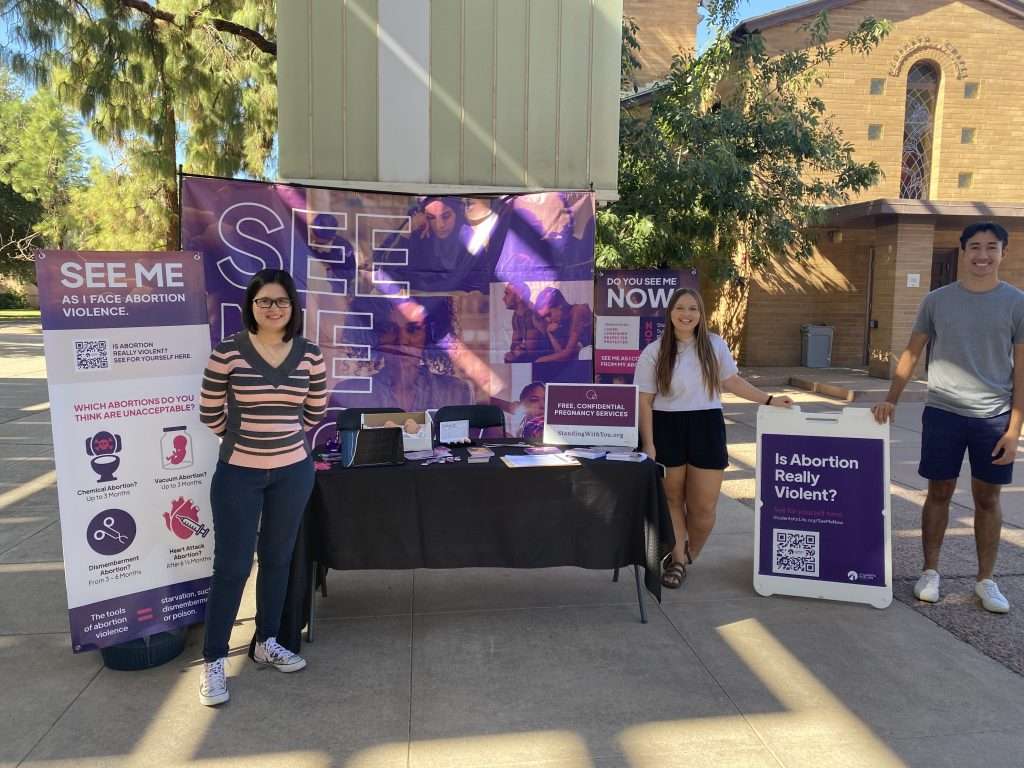 We also had hardly any negative interactions. A couple of people did pass with negative comments, saying “You stand for forced delivery” or “You should be ashamed,” but these comments were few and far between.

Instead, even when we met with pro-abortion students, we were able to deliver the truth peacefully. We spoke with one woman who told us she was pro-choice because of a woman’s right to choose what to do with her body—but she admitted that she was conflicted about abortion because she knows the baby is human too. We agreed with her that a woman should be able to choose what to do with her body, but we pointed out that she acknowledged what science tells us: a preborn baby isn’t a part of a mother’s body. A preborn baby is his or her own separate person. Additionally, when we told her a preborn baby can feel pain at 16 weeks (in fact, evidence shows that preborn children can feel pain as early as 12 weeks) and showed her our fetal models, she seemed even more conflicted.

I explained to her that we were there to show the violence and victims of abortion to educate the public on this human rights issue and to also inform women that abortion isn’t their only choice in a difficult pregnancy, despite what Planned Parenthood might say. The woman was grateful for our conversation, and she thanked us for what we were doing before scanning our QR code video and heading on her way. 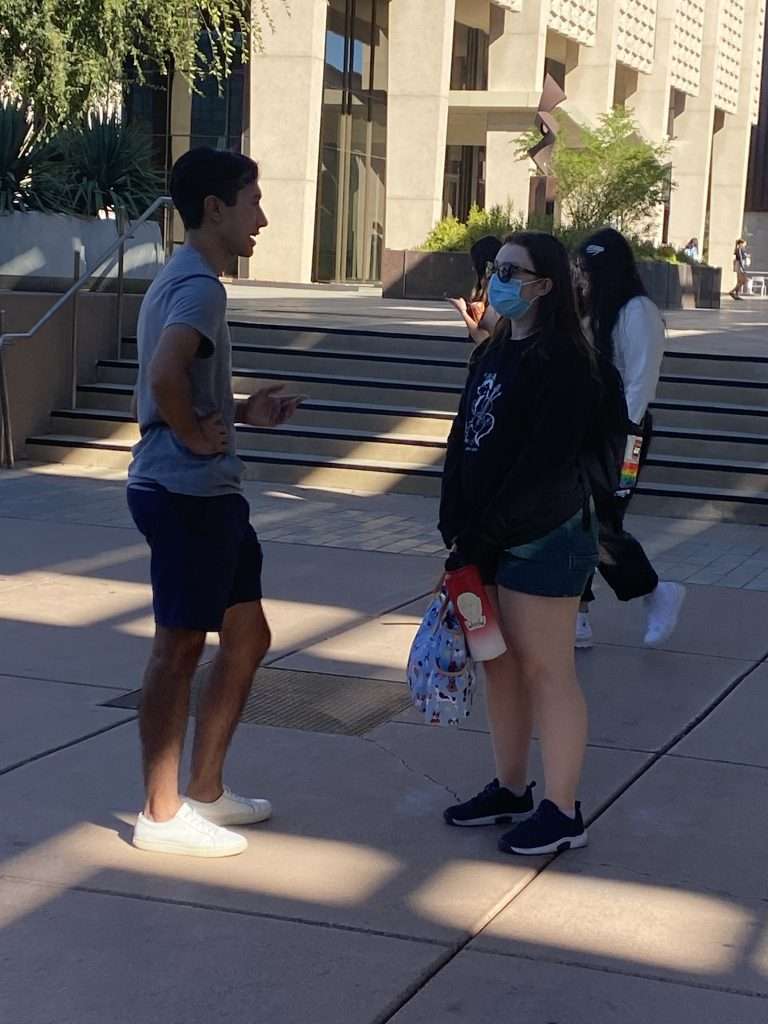 Another man we spoke to was very heated, and I talked with him for at least twenty minutes. He was adamant that if his own daughter were raped or were in any unplanned pregnancy, he would want her to be able to undergo an abortion. I agreed that we would want his daughter to have choices, but abortion violence shouldn’t be on the table.

We talked about how abortion is a life-or-death situation for a preborn child, who isn’t any less important or valued based on the circumstances of his or her conception. We talked about how abortion harms mothers and doesn’t fix the trauma caused by sexual assault. We even discussed how abortion can cover up crimes of sexual assault, making only the rapist’s situation better. Instead, the pro-life position offers women in unexpected pregnancies real help: diapers, childcare, counseling, etc.

I don’t know if I ultimately changed the man’s mind. He was defensive and argumentative at first, but as we spoke, something seemed to change and he grew more interested in our conversation. He scanned our QR code, thanked me for being peaceful, wished us luck, and went on his way. I pray we planted a seed. 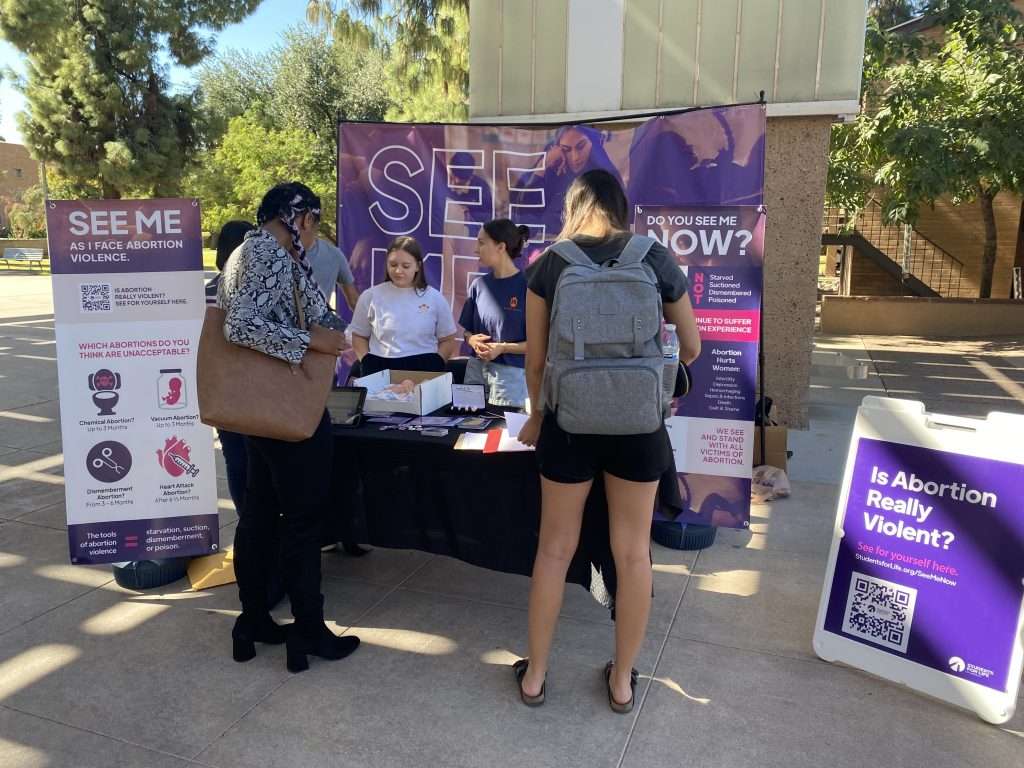 I was also impressed and proud of my ASU pro-life students; the entire group stayed the whole time to converse with their peers and to change hearts and minds! They have been amazing pro-life advocates this entire semester, as they have attended the Standing with You retreat, door knocked for the Phoenix Campaign for Abortion Free Cities, sidewalk counseled during 40 Days for Life, hosted Masses and prayer vigils at the pro-life Aid to Women Center, and much more. I want to thank them from the bottom of my heart for all their hard work and leadership. This group should be an inspiration to the entire pro-life movement; they are movers and shakers!

I want to ask the Pro-Life Generation for prayers. There was one girl who, when passing our display, told a student she would be going to her abortion appointment the following Monday. While she may not have been serious, I hope our presence and openness helped to change her heart for LIFE, and that, if she needs support and resources, she will reach out to ASU Students for Life and to our Standing with You website.

The See Me Now tour is unique in how it pulls at the heartstrings and compels the mind to action. When students witness the humanity and vulnerability of preborn babies through the fetal models on display at our tour stops, they are very responsive. We look forward to continuing this awesome tour!