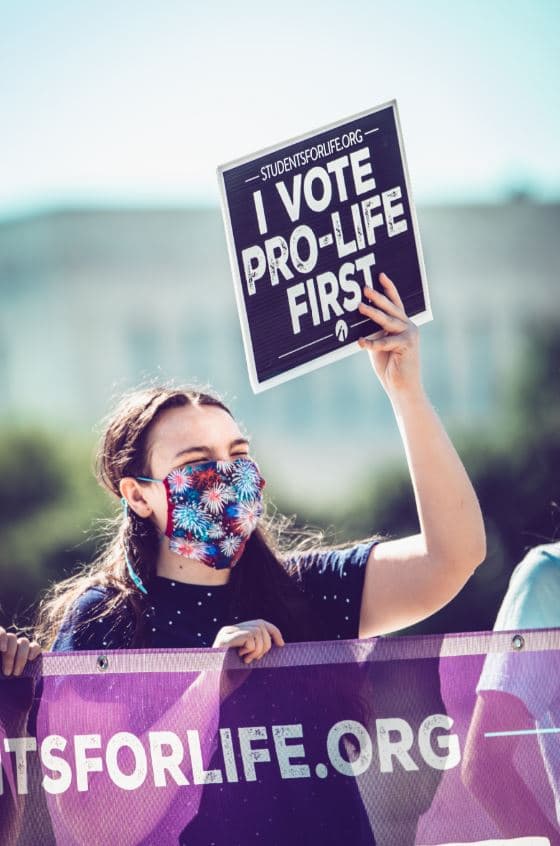 “Student leaders and SFLA team members will equip the Pro-Life Generation with the tools to activate voters who hate abortion so much, they will vote Pro-Life first,” said SFLA’s Kristan Hawkins. “We’ll be bringing 2,362 baby socks with us to each campus stop, representing the number of babies lost to us each day to the violence of abortion. And, now, with a vacancy at the Supreme Court, the reasons to prioritize electing pro-life leaders has never been clearer.”

WASHINGTON D.C. (09-23-2020) – Students for Life of America President Kristan Hawkins announced SFLA’s fall campus tour “Sock the Vote”  coming to 46 states to equip students across America to join the national dialogue about why voting pro-life matters and to expose the tragedy of abortion, which ends 2,362 lives each day. This follows a very successful earlier campaign, “Sock it to Planned Parenthood,” during which SFLA held events and traveled across the country with a truck carrying 328,348 baby socks, representing the number of abortions Planned Parenthood commits each year. “The tragedy of abortion can be seen in thousands and thousands of empty socks, never to hold the precious feet of babies lost to us all forever,” said Hawkins. “We are going to equip first-time voters with the tools needed to explain the human rights issue of our day and to activate them to cast their vote in opposition to abortion.”

This is just one of the many grassroots initiatives that Students for Life of America and SFLAction will engage on during the election cycle. For more on the reasons for Catholic and faith-oriented voters to get engaged in this election, click here to read Hawkins column this week at USA Today.

The “Sock the Vote” tour has three tiers based on school COVID-19 policies and restrictions related to social distancing. Tier 1 is an in-person event with SFLA staff. Tier 2 is a student group hosted event. For campuses still closed to in-person classes, Tier 3 is digital. To view materials and get more information on the tour content, click here. At present, 46 states have tours, except Delaware, Maine, Rhode Island and Vermont, however, tour stops are being added as confirmed.

As multiple media reports note, “Abortion may be the sleeper issue of 2020.” An August Pew poll found that 40 percent of Americans say that abortion is a “very important” issue for their vote.

But as NPR observes, pro-life voters are even more committed than pro-abortion voters: “Perhaps most revealing, a spring poll from Gallup found that about 1 in 4 Americans, particularly voters who oppose abortion rights, see abortion as a sort of personal litmus test. Fully 30% of people who consider themselves ‘pro-life’ say they would only vote for a candidate who shares that view compared to 19% of people who consider themselves ‘pro-choice.’”

“A candidate’s position on abortion tells you everything you need to know about how the most vulnerable will be valued,” said Hawkins. “Anyone willing to give scarce taxpayer resources to a well-funded abortion lobby and ignore the humanity of people unable to speak for themselves is unlikely to bravely and ethically confront other important issues.”

Click here to read Hawkins’ column in USA Today on why she is a single-issue voter.