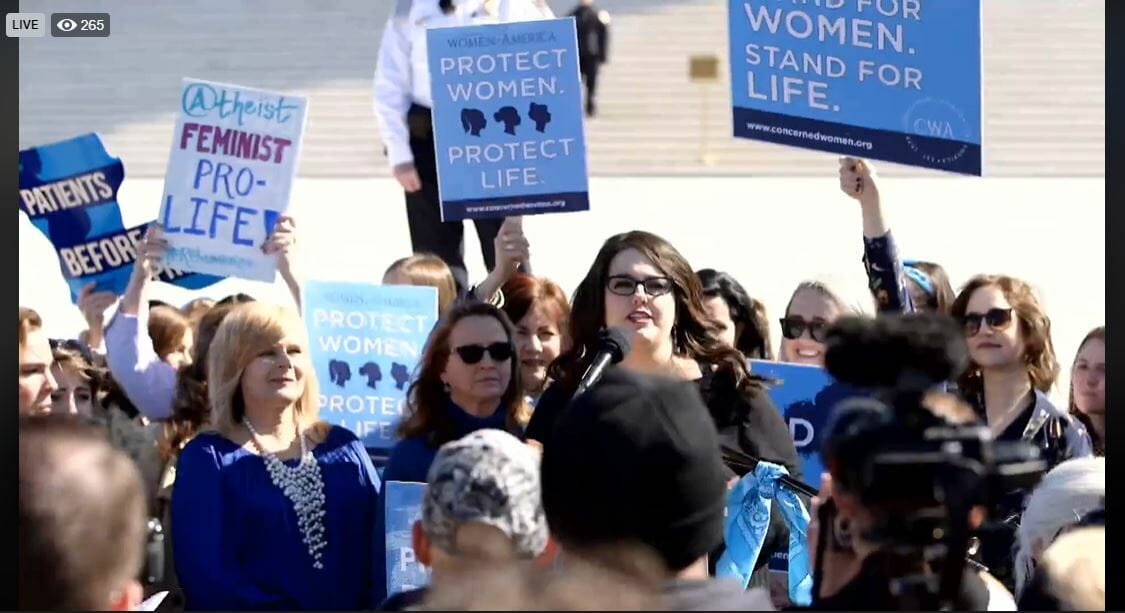 “Allowing the abortion industry to police itself is like trusting the tobacco industry to stop lung cancer. They both sell a deadly product that causes harm and have to be held accountable,” said Hawkins.

WASHINGTON D.C. (03-04-2020) – As the Supreme Court prepared for oral arguments in the June Medical Services v. Russo case, which looks at whether the state of Louisiana can protect women’s lives by requiring an emergency plan be in place for hospital care, Students for Life of America President Kristan Hawkins joined the Protect Women, Protect Life Event in front of the Supreme Court, following an all-night vigil that SFLA students held at the court.

Hawkins made the following remarks:

“My name is Kristan Hawkins representing more than 1,200 groups on college, university, high school and even middle school campuses and I stand here today where I’ve stood many times because the life and death issue of abortion was hijacked by Seven Justices in Roe v. Wade and Doe v. Bolton. That kind of judicial activism motivates the Pro-Life Generation, especially the students, Millennials and Generation Z voters I work with daily, as we understand that for the most part, we don’t have a VOICE and a VOTE on the human rights issue of our day – abortion.

“But it’s that issue that lead Students for Life to go across the country TWICE now on our #Justice4Life tour, in support of Justices who respect Life in the Law … and that today brings us again to Washington D.C. on what should be a simple matter and an easy question.

“Does the Constitution give the abortion industry the right to HARM women by failing to arrange for them to survive an abortion? The answer should be an easy NO.

“Allowing the abortion industry to police itself is like trusting the tobacco industry to stop lung cancer … They both sell a deadly product that causes harm and have to be held accountable.

“The State of Louisiana asked abortion vendors to follow the same laws that protect women in other, REAL, medical facilities. But the abortionists want to keep medical standards low and profits high, to benefit NOT WOMEN, but their bottom line. The abortion lobby should not have a “get out of regulations free card” … and ironically, it’s not women fighting regulations designed to protect them, it’s abortionists who don’t want to take the time or spend the money to protect women.

“This is the kind of case that helps us at Students for Life of America as we talk with students across the country because it illustrates that the abortion industry doesn’t care enough about helping women to put an emergency plan in place should an abortion go wrong.

“Planned Parenthood and the abortion industry consistently undermine women’s confidence in themselves with a defeatist message that they can’t thrive and prosper in their careers AND in their family life. They convince women that they must choose between their future and their child.

“They sell women short – and then they sell them an abortion.

“And as we’ve learned in this case before the Supreme Court, the abortion lobby doesn’t even care enough about women to make sure that they survive that abortion. But this can change, and our thanks to the legislators in Louisiana who have worked hold the dangerous and disreputable abortion industry to account. We don’t want any more Kermit Gosnell’s harming women.”

Click here to watch the live stream of the rally.

Click here to read Hawkins’ op-ed at USA Today defending the Single Issue voters who make abortion the reason for their vote.