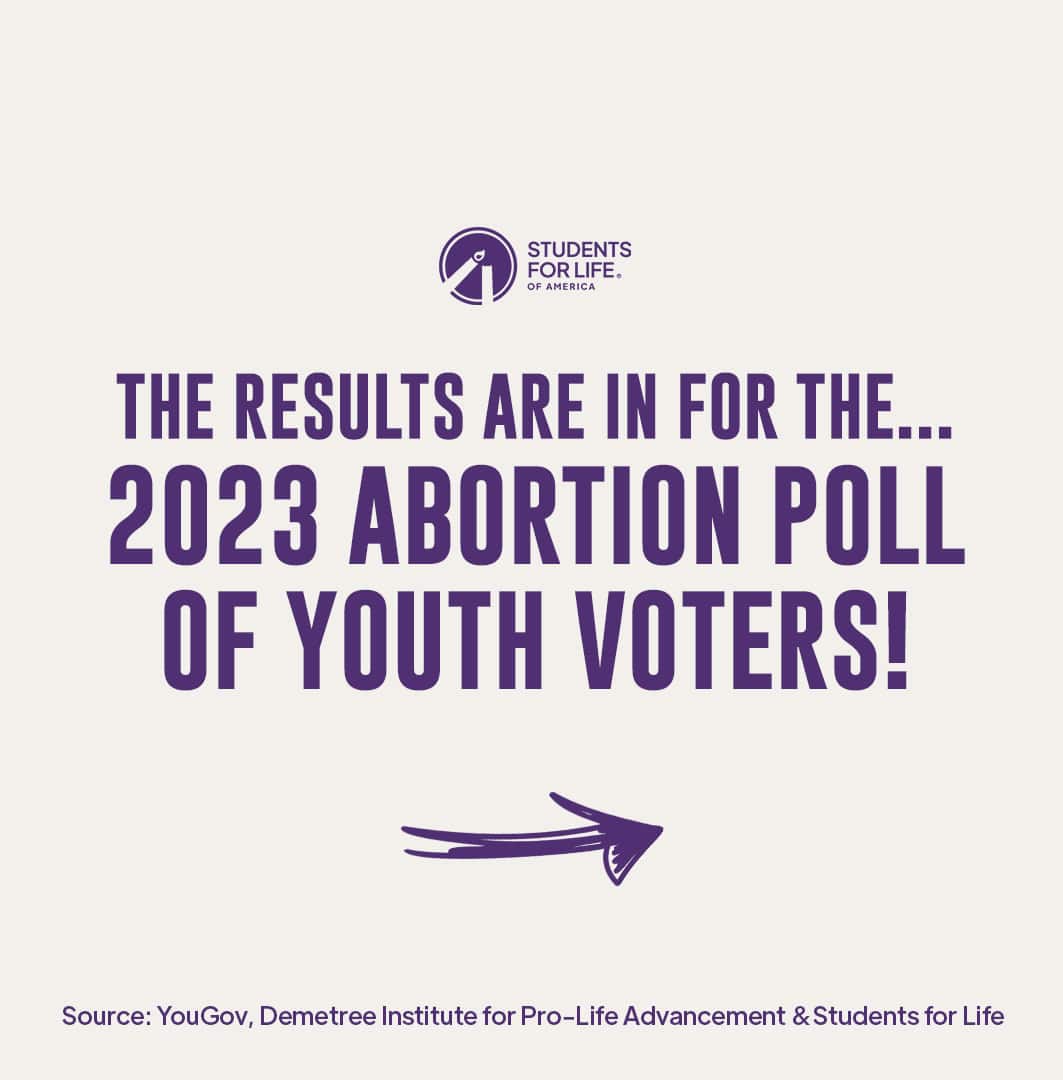 “The generation most targeted for abortion reject the Biden Administration’s recklessness with their lives when it comes to Chemical Abortion Pills,” said Students for Life of America’s Kristan Hawkins. “Almost 9 in 10 take issue with the policies pushed by Biden’s team of abortion extremists who advocate for policies putting women at risk of injury, infertility, death, and abusers, who use the drugs on women without their knowledge or consent. And more than 9 in 10 support specific health screenings to protect them.”

WASHINGTON D.C. (01-19-2023) – Students for Life of America released its fourth, wide-ranging poll of the largest segment of voters in America – the Youth Vote (Gen Z & Gen Y) – conducted by YouGov-Vinea, finding once again that they reject the radical abortion extremism attributed to them. Again this year, almost 7 in 10 report they want limits on abortion. But by margins of more than 9 in 10, Gen Z & Gen Y voters reject the No Test, Online Distribution of Chemical Abortion Pills pushed by the Biden Administration that exposes them to injury, infertility, death, and abusers, who use the deadly drugs against women without their knowledge or consent.

And equally of note, a generation of environmentally conscious voters supports efforts to test America’s water systems and to require Red Bag Medical Waste disposal, so that the deadly harms of abortion don’t spill over into the water impacting aquatic and animal life, and the nation’s food supply.

“Just this week, West Virginia became the first state in the nation to introduce a bill to protect our nation’s water supply by requiring proper disposal of the chemically tainted blood, tissue, and human remains flushed into our wastewater,” noted Students for Life Action President Kristan Hawkins. “It’s just common sense. If you shouldn’t flush fish into our sewer systems, you shouldn’t do that to human beings either.”

The health and safety standards that were in place regarding the distribution of Chemical Abortion Pills were first reduced during President Obama’s tenure, and then gutted by the Biden Administration. But Gen Z and Gen Y don’t appreciate being asked to risk their lives and fertility to make it easier to sell abortion pills.

In the poll we found:

ON OTHER POLITICAL ISSUES: the youth vote holds many of the same nuanced views on the most discussed abortion policy today with a base of support for gestational limits, born alive protections, and keeping taxpayers out of the abortion business.

But the power of the SFLA model could be seen in data on minds changed. When asked about efforts to “Codify Roe,” we saw a dramatic shift from support FOR to OPPOSITION when the voters were told about what that meant – abortion through all 9 months, taxpayer funded, for any reason, and prohibiting health and safety standards in the 50 states.

After they learned more, young voters changed their minds and the math flipped by 15 points as 37% supported “Codifying Roe” after learning more, down from 52%. Those opposing “Codifying Roe” rose from 22% to 47% — a 25-point shift, made possible in part as 26% undecided fell to 16%.

EVENTS OF CONCEPTION DID NOT DEMAND ABORTION FOR ALL:

Despite claims that most voters insist on abortion when a child is conceived in rape and incest, the results indicated a strong base of support for preborn life no matter how a child was conceived. SFLA & SFLAction reject prejudice against people based on their age, sex, race, level of income, perceptions of their abilities, or the events of their conception. We reject shaming an innocent child for things outside their control, which do not diminish their humanity.

But how do our peers see it?

Looking at protections for women in a life-threatening pregnancy, where only one life can be saved, Gen Z & Gen Y by 32% said they could support a candidate who only advocated for that single exception in the law. When asked their views on support for a candidate who would allow abortion for reasons of rape and incest, as well as to save a mother’s life, that support raised only 2 percentage points, to 34%.

Taking the principled stand to advocate for people despite events out of their control didn’t change the level of overall support among the youth vote.

THE DEMOCRATIC PARTY PLATFORM AND AGENDA OF THE BIDEN ADMINISTRATION WAS NOT A WINNER:

Asked whether they could support a candidate who wanted abortion without limits and no restrictions of any kind, 4 in 10 reject that extremism, reporting that they are UNLIKELY (extremely to slightly) to give their vote. And 35% said that their vote was unlikely to go to someone promising taxpayer funded abortion, which is littered throughout our federal budget.

As noted above, in 2023, MORE young people now believe abortion should not be legal, now at 23% compared to 9% in 2022. The radical agenda of the Democratic Party is out of step even with those presumed to be their most ardent supporters.

FOR AN EXECUTIVE SUMMARY OF POLL RESULTS, CLICK HERE

In early January 2023, YouGov/Vinea Research interviewed 1,216 registered voters between the ages of 18-41 (Gen Z and Millennials) via a 5-minute online survey. The sample of 1,216 was then matched down to a sample of 1,000 to produce the final data set. Respondents were matched to a sampling frame on gender, age, race, and education. The frame is a subset of a politically representative “modeled frame” of adults, based upon established methods for these types of surveys: using exit polls and surveys, weighting using propensity scores, applying logistic regression estimates, grouping into deciles, and post-stratification. The margin of error for this study is ± 3.37.

Hans Plate, President of Vinea Research, was the research liaison, working closely with SFLA and YouGov in all aspects of the research. To contact Hans for questions on methodology, survey design, and results, email [email protected].

CLICK HERE TO READ HAWKINS’ OP-ED at the National Review detailing how the pills can lead to injury, infertility, and even death to mothers as well as to the preborn.