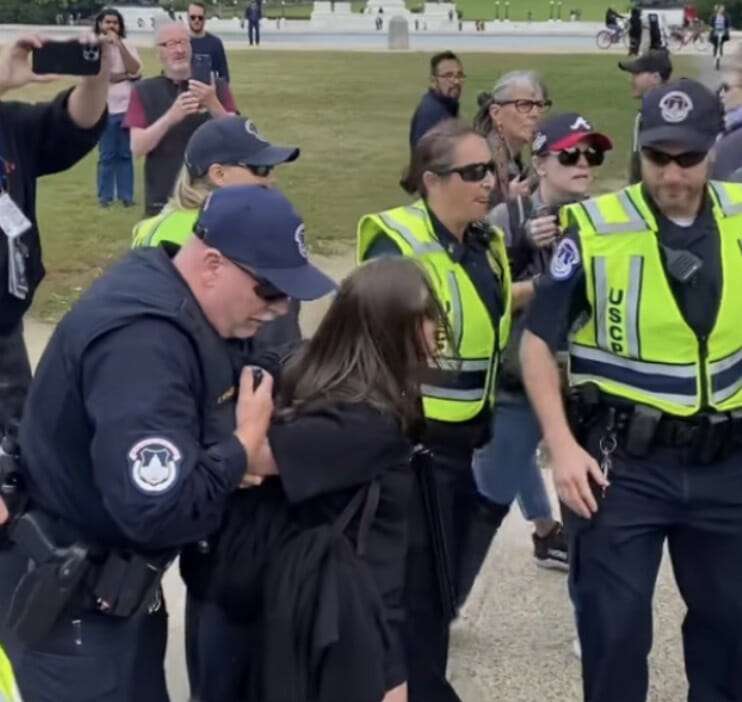 “Abortion supporters keep trying to silence the voice of pro-life women who have the right and the responsibility to speak up for preborn women,” said SFLA Director of Leadership Initiatives Mary Briganti. “We deserve a voice and an opportunity to speak out against the violence of abortion, and we will not be stopped by the perpetual violence and hostility of the abortion lobby. Free speech includes pro-life speech, and we want to thank the security we had to hire today so that we could be heard.”

WASHINGTON D.C. (10-08-2022) – A pro-abortion protester was arrested at the Washington D.C. “Women’s March” today after continuously harassing Students for Life of America (SFLA) team members and students who were counter-protesting for preborn women. While the woman had been warned multiple times by the police that she was disrupting free speech, she continued in her harassment and became even more aggressive before police intervened to arrest her.

“We were leading the Women’s March as pro-life women, and we were met with aggression immediately. One woman tried to stop our forward movement in the march by planting her feet directly in front of us and leaning against the middle of our banner that said, “Abortion Betrays Women.” The police had to move her out of our way twice until eventually she became overly aggressive and was forcibly moved to the sidewalk and arrested.”

SFLA counter-protesters in New York City also were blocked from marching after abortion supporters formed a human chain to stop them. Click HERE to see SFLA’s Instagram story on this incident.

Each year, SFLA has experienced harassment and hostility from abortion supporters at these events. Incidents have included abortion supporters stealing and throwing pro-lifers’ phones, verbal abuse and threats, and physical abuse through hitting, shoving, and pushing.

In exercising our free speech rights on behalf of the preborn and their mothers, Students for Life of America team members and students often face opposition and even violence.

“Sadly, the public discourse is changing for the worse, as peaceful protests turn more frequently into confrontations. Threats and acts of violence against pro-life activists are becoming increasingly common. Students for Life students and team members have endured everything from physical attacks and arson to bomb threats and intimidation, making security issues a vital concern and expense for pro-life events. When Justice Brett Kavanaugh—who was seen as a possible pro-life vote—was confirmed to the Supreme Court, protestors stormed the Court, banging on the doors. Outside the U.S., violent protests broke out in Poland and Latin America when those countries contemplated pro-life policies. Antifa has protested my own speaking tours and recently the Chicago March for Life.

“Some abortion supporters are pairing their advocacy for the violence of abortion with violent acts, which have a definite chilling effect on public discourse that must be overcome. When people are afraid to use their free speech rights, those rights don’t truly exist.”

Click HERE to read SFLA’s earlier press release on counter-protesting the Women’s Marchs in support preborn life and the large majority of women who are pro-life.

For interview requests, please reach out to [email protected]