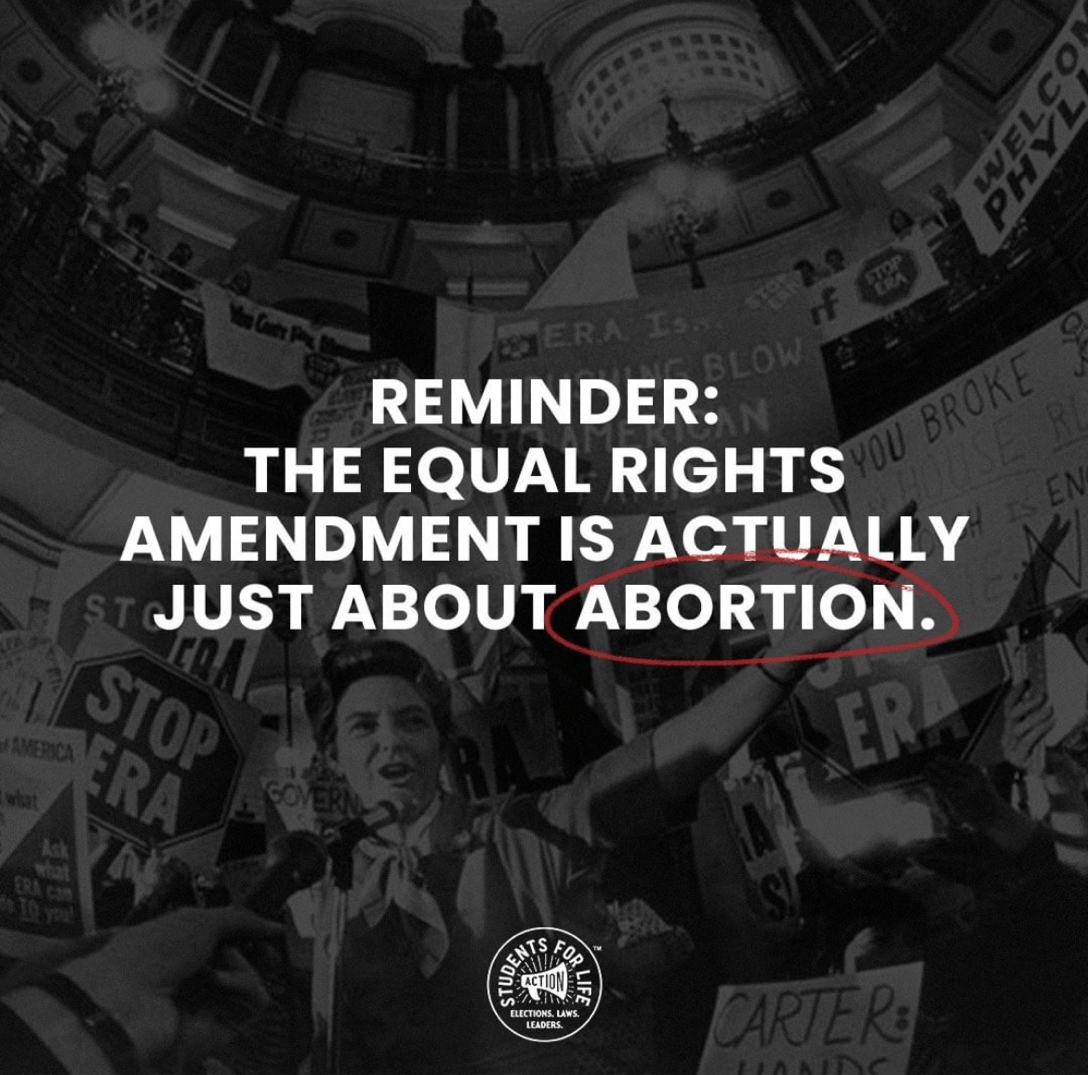 “Abortion activists will not be able to bully their way into the Constitution. As the late Justice Ruth Bader Ginsburg said, ‘there is too much controversy’ over the failed push to get 38 states to agree with a radical abortion agenda,” said Students for Life Action’s Kristan Hawkins.

WASHINGTON, D.C. (09-28-2022) – As efforts are underway in a D.C. appeals court to force the long-dead Equal Rights Amendment – better known as the Everything Related to Abortion Act – into the Constitution, Students for Life Action (SFLAction) President Kristan Hawkins observed: “Students for Life has opposed efforts to resuscitate a long-dead ERA – the Everything Related to Abortion Act – as it is fundamentally a Trojan Horse for abortion. The ERA is a backdoor means to getting abortion into the Constitution, and as we saw in Dobbs, abortion just isn’t there.  There has been a hard-fought journey to the end of this road, and abortion activists will not be able to bully their way into the Constitution.”

SFLAction has been on the front lines opposing a radical and unlawful re-write of the Constitution with a failed measure. In a 2021 Students for Life-authored coalition letter opposing efforts at that time to force the ERA into law, national and state pro-life and pro-family leaders observed:

Almost 100 years after it was first proposed, the pleasant-sounding Equal Rights Amendment returns to the headlines and to Congress in H.J. Res. 28 and H.J. Res. 17 with promises of establishing new rights and protections for women. In fact, that is the opposite of what would happen if the ERA, now more accurately known as the “Everything Related to Abortion Act,” is allowed to create a foothold in the U.S. Constitution for abortion, something Roe v. Wade has not achieved as on-going litigation against it illustrates.

This is not speculation as abortion advocates fundraise and evangelize on behalf of the ERA to enshrine their deadly business into our nation’s foundational document.

In March 2019, the National Abortion and Reproductive Rights Action League (NARAL) said in an e-mail to supporters: “In order to protect our reproductive freedom today it’s essential we pass the newly re-introduced bill to ratify the ERA. With its ratification, the ERA would reinforce the constitutional right to abortion by clarifying that the sexes have equal rights, which would require judges to strike down anti-abortion laws because they violate both the constitutional right to privacy and sexual equality.” This echoes Betty Friedan’s call for ERA passage in the 1970s so that abortion could be institutionalized as a “right” rather than understood as the tragedy that it is.

In fact, courts have already ruled that state-based ERAs require taxpayer funding of abortion, which is not supported by a majority of Americans.

ABORTION HAS NO PLACE IN OUR U.S. CONSTITUTION. The link between those supporting the ERA and an activist abortion agenda troubles us greatly, leading us to oppose the ERA because of how it will be used to promote and expand abortion, the human rights issue of our day. But there are FOUR ADDITIONAL REASONS why legislators should vote NO when asked to give the ERA a place in law.

The current efforts to advance the ERA into the Constitution could be rejected simply on the grounds that supporters did not get enough states to ratify it in time to meet TWO Congressional deadlines, recently affirmed in federal court.

The late Justice Ruth Bader Ginsburg herself addressed this when talking about how the ERA supporters pushed ratification in some states after the deadlines while ignoring those states who changed their minds about ratifying, now numbering five. “There is too much controversy about late comers,” she said. “Plus, a number of states have withdrawn their ratifications. So if you count a latecomer on the plus side, how can you disregard states that said we’ve changed our minds?”

When children losing a game try to change the rules, we teach them that winning is not guaranteed and sometimes you must try again. That is the advice in fact that Justice Ginsburg offered to ERA supporters, saying, “I’d like it to start over.”

The ERA’s impact on efforts already in place to help women specifically is likely to be devasting. Hundreds of laws established for women would no longer be allowed as the ERA states that a person’s sex could not be considered in making a legal preference.

Laws protecting women include the Equal Pay Act of 1963; the Civil Rights Act of 1964; the Equal Employment Opportunity Act of 1972; the Federal Minimum Wage Act of 1974, and the Pregnancy Nondiscrimination Act of 1964. In fact, Justice Ginsburg wrote in Sex Bias in the U.S. Code that the ERA could change800 federal laws. The financial impact on women is incalculable, and ERA will do nothing to focus attention on sexual crimes against women, as a focus on women would be discouraged.

Feminist icons like Eleanor Roosevelt and Dorothy Kenyon (who chaired the ACLU’s Committee on Women’s Rights) opposed ERA because they believed it would harm laws designed for women. In 1940s and 1950s, the ACLU and other left-of-center organizations dubbed it the “Unequal Rights Amendment.”

THREE: THE ERA INSERTS CHAOS INTO THE CONSTITUTION.

In the current cultural environment, another problem with the ERA is the definition of “sex,” which wasn’t up for debate 100 years ago.

Cultural activists want to use the ERA to put “sex” into the U.S. Constitution and then define it with the Equality Act, which tells us that “sex” is a fill-in-the-blank concept open to legal interpretation. And that definition doesn’t necessarily protect women at all.

Many are already writing about how the “Equality Act” makes women vulnerable by allowing biological males into places where women don’t feel safe, like domestic violence shelters, bathrooms and even prisons, or how by removing the idea that women are distinctive, we end women’s sports by enlarging the pool of competitors women’s biological reality.

When the Trump Administration said that for federal policy, sex would be defined “on a biological basis,” the Washington Post, gender educator Molly Woodstock wrote: “This development was terrifying and bizarre. Such a policy would go against everything we have come to understand about gender, and how it is defined by social and cultural factors rather than biological traits.”

Clearly, far from protecting women’s rights in the Constitution, the ERA would open doors to a litigious future in which “sex” definitions are attacked and re-written by judges and activists, eroding protections and opportunity for women.

FOUR: THE 14TH AMENDMENT ALREADY PROTECTS WOMEN IN THE CONSTITUTION.

In the Supreme Court case Reed v. Reed, the justices found that the Fourteenth Amendment, which states, “No State shall make or enforce any law which shall abridge the privileges or immunities of citizens of the United States . . . nor deny to any person within its jurisdiction the equal protection of the laws,” applied to women. While working for the ACLU, Justice Ginsburg argued and won that case, which stands today.

With all of these troubling issues in mind, we the undersigned ask that legislators vote NO on any efforts to resurrect the ERA. Protecting and defending the rights and needs of women is an important part of our public policy, charitable and cultural engagement across the board. Sadly, the ERA will harm women’s interests, which should concern everyone trying to ensure that women are respected and protected in the law.

Hawkins has written frequently on the measure, including:

·      Washington Times: “Antiquated Equal Rights Amendment should not get a do-over”

·      RealClearPolitics: ERA: A Failed Idea Even Before It Gets to Court

·      The Federalist: (along with Anne Schlafly Cori) Left Trying To Revive Equal Rights Amendment To Get Abortion In The Constitution

One of the most stunning indictments of the failed ERA came from abortion-supporting then Justice Ruth Bader Ginsburg who noted that the effort just didn’t make the cut. Her words, as reported at Vox in an article titled: Ruth Bader Ginsburg probably just dealt a fatal blow to the Equal Rights Amendment.

Vox reported: “At an event at Georgetown University’s law school, moderator and federal appellate judge Margaret McKeown asked Ginsburg about an ongoing effort to revive the Equal Rights Amendment (ERA), which provides that “equality of rights under the law shall not be denied or abridged by the United States or by any state on account of sex.”

“Three-fourths of the states, or 38 total, are required to amend the Constitution. Last month, Virginia became the 38th state to ratify the ERA and one of only three states to do so since 1977 — but there’s a catch. Congress imposed a 1982 deadline on states hoping to ratify the ERA, though there’s doubt about whether this deadline is binding.

“Ginsburg’s comments on Monday suggest that she believes this 1982 deadline should be considered binding. ‘I would like to see a new beginning’ for ERA ratification, the justice told McKeown.

“’There’s too much controversy about latecomers,’ Ginsburg added. ‘Plus, a number of states have withdrawn their ratification. So if you count a latecomer on the plus side, how can you disregard states that said, ‘we’ve changed our minds?’”