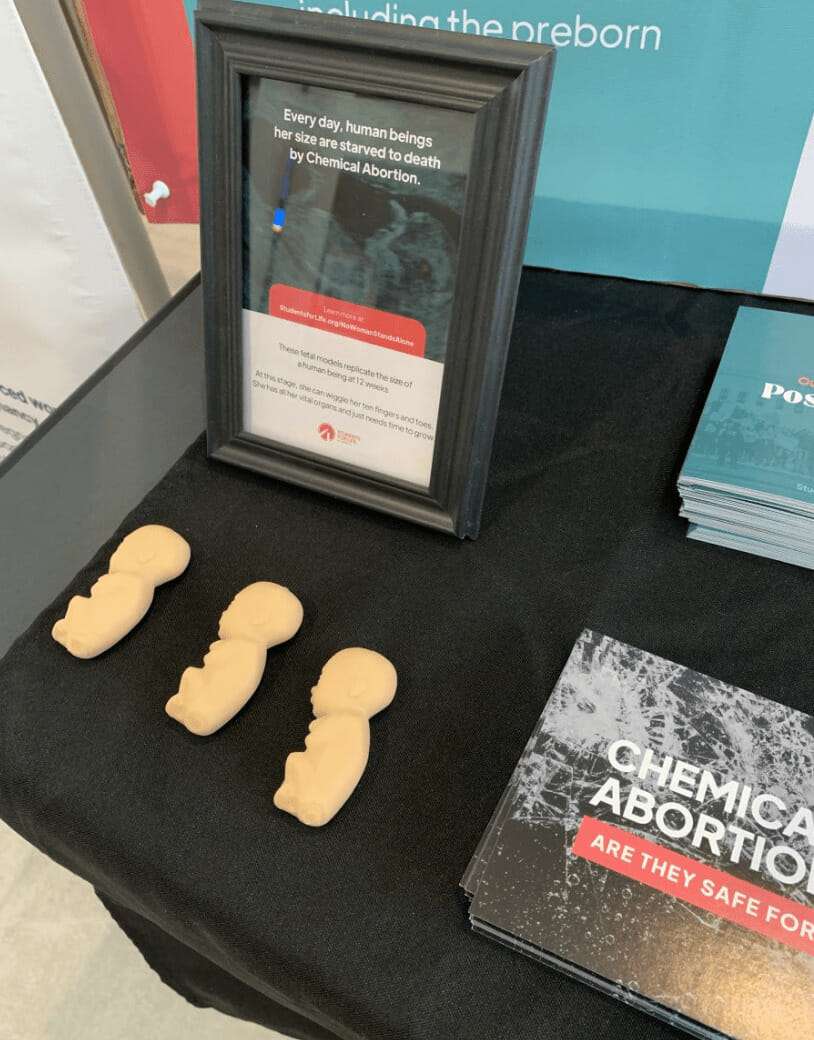 GUEST POST: I wish I could say that I was shocked by the way my fellow pro-life peers and I were harassed by a group this past Wednesday, but I’m just not. As we fight to protect the right to life for all human beings, pro-lifers have been forced to grow a thick skin as radical abortion supporters heartlessly abuse us in our every effort – and this recent campus incident showed me once again how the abortion lobby doesn’t care about respecting born or preborn life.

While my Students for Life of America (SFLA) group was recently tabling on our campus at Rider University, we came to face to face with the hatred and destructiveness of the abortion lobby. My group members and I were engaged in productive conversations about abortion with other students and while we were busy with peacefully exercising our First Amendment rights, a pro-abortion student snuck up to our table and stole our model of a ten-week old preborn baby. We use this model on campus because it can be helpful to show people fetal development as most students don’t know that a ten-week old baby has a heartbeat, organs, fingers, toes, and fingerprints – but apparently this scientific reality was too much for the pro-abortion student to handle.

Before we could realize what was happening, the pro-abortion student tore off the head of our baby model. She put the baby model’s head in a nearby ashtray and threw the decapitated body in the grass. At this point, another pro-abortion student grabbed a wristband off our table and snapped it under his foot. In just a few short moments, they had cost us a lot of damage – and for what? How does ripping apart a model baby show anything other than hate? We spoke to the student afterwards, and thankfully she replaced the model.

One of my group members began recording in case anything else happened, but one of the male pro-abortion students began to bully and imitimdate him into deleting the video. We could have rightfully kept the video as it was taken outside in public and New Jersey is a one-party consent state, but because of the extreme intimidation from the pro-abortion student, we were forced to delete it.

We reported this incident to our campus security, and they are currently  investigating what happened. We’re so grateful for their dedication to protecting our group, and we hope that every other SFLA group has a wonderful security team like this because this type of intolerance towards pro-lifers has unfortunately been on the rise since the reversal of Roe v. Wade.

As a woman myself, I laugh at the idea that being pro-life is anti-woman (after all, what about all those little, preborn women?), and I recognize the scientific reality that life begins at conception. My pro-life views are supported by overwhelming scientific evidence and 95% of biologists, and I know that this means that an innocent human being dies in every abortion.

This issue is one that many members of the Rider University community are very passionate about, and we are not willing to be quiet about our beliefs when there is so much on the line. This is truly a matter of life or death – and if I can be respectful of the abortion lobby’s radicalism (even while they are trying to bully our club members), they certainly need to be tolerant of us.

All we ask is for the opportunity to have productive conversations on campus without the destruction of our property, threats of violence, and intimidation. My group and I don’t expect that level of consideration from the abortion lobby, but we won’t be deterred. We will follow through on investigations into this incident, and we will never stop fighting to make sure every woman is supported and every baby has the right to life.

READ NEXT: Blind Rage: A Clinical Psychologist Explains Why the Sight of Baby Models on College Campuses Ignite Outrage