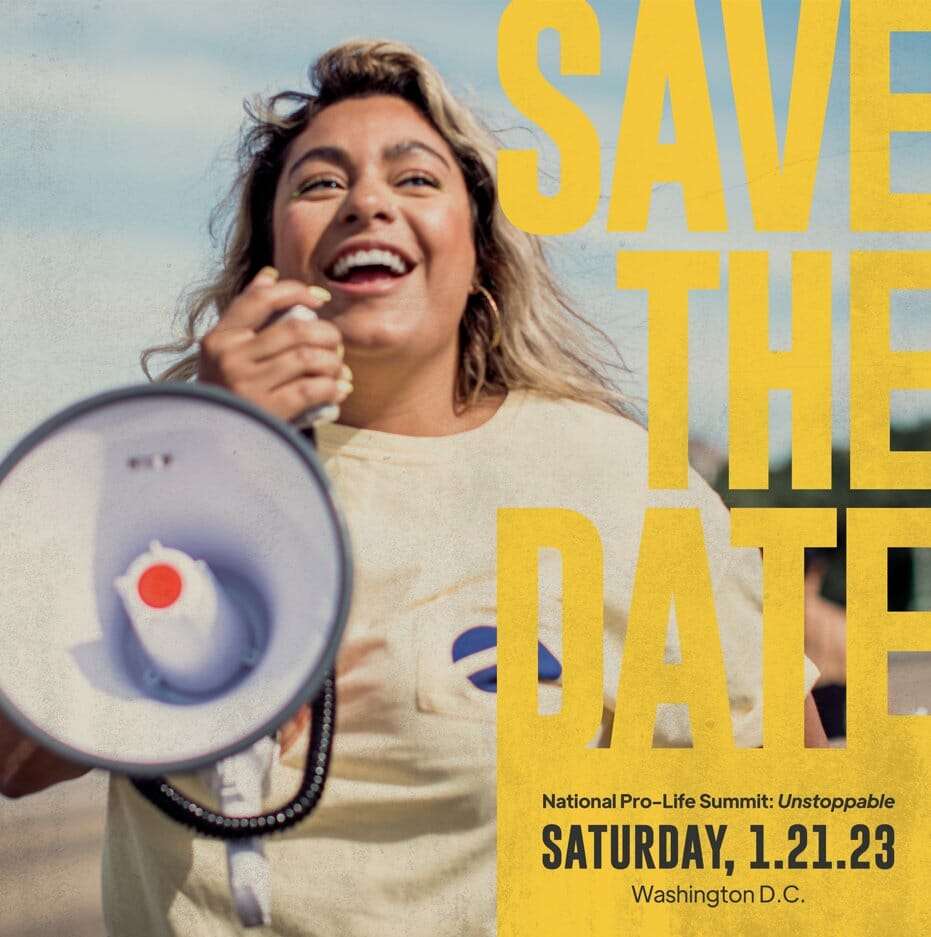 We are the first Post-Roe Generation, & We are UNSTOPPABLE

MEDIA ADVISORY: Media must be credentialed and registered to attend the event.

WASHINGTON, D.C. (09-06-2022) — In January, Pro-life Americans will be back in the nation’s capital for the national pro-life march timed to what would have been Roe v. Wade and Doe v. Bolton’s 50th anniversary – now a cautionary legal tale of judicial overreach. Following the march, national leaders and well-known speakers in the pro-life movement will again hold a strategy and training conference – the National Pro-Life Summit titled Unstoppable — to prepare for the next steps in this Post-Roe America. The world’s largest Pro-Life Generation training conference will be held the day before the 50th anniversary of the fallen Roe v. Wade decision: Saturday, January 21, 2023, from 8 a.m. to 7 p.m. EST at the Omni Shoreham Hotel at 2500 Calvert Street Northwest, Washington, D.C. 20008. Students for Life of America (SFLS) & Students for Life Action will be joined by key organizational partners like the Alliance Defending Freedom and Patriot Mobile in welcoming an all-star lineup of pro-life experts and activists.

As Hawkins noted in her recent op-ed at Fox News, RIP Roe: Supreme Court abortion ruling sets stage for what pro-life groups do next, she observed, “Given the dangers and health risks of abortion to women and certainly to the preborn, states have a right to act to preserve and protect the preborn and their mothers. And many pro-life groups are lining up to help. For the engaged millennial and Gen Z activists that I lead in a 50-state operation, it means bringing the abortion debate to a state capital near you.”

SFLA has trained more than 150,000 students nationwide, preparing single-issue voters to get to work. Click HERE to watch a recap video of the 2022 Summit.

Polls already show that Millennials and Gen Z — now one-third of the electorate — do not support the radical abortion extremism of the Left. Instead, 75% of these young voters want limits on abortion with more than 40% favoring no abortion at all or abortion limited to exceptions of rape, incest, and life of the mother.

Students for Life of America’s effectiveness in motivating, training, and mobilizing Millennials and Gen Z has been noted by many in the media, including award-winning documentarian Cynthia Lowen who recently released the documentary Battleground which featured SFLA and the Pro-Life Summit. While Lowen does not support the pro-life goals of SFLA, she applauds SFLA’s strategic and effective approach. She said SFLA’s mission is to “create the next generation of the anti-abortion movement’s foot soldiers.”

Click HERE to register for the National Pro-Life Summit as a student or adult.

For more information on the National Pro-Life Summit, click HERE. Media must be credentialed and registered to attend the event. Click HERE to register.

Students for Life Action (SFLAction), a 501c4, along with its sister organization, Students for Life of America (SFLA),a 501c3, make up the nation’s largest, pro-life, youth organization as well as operating a political and policy operation engaging people of all ages. Together they work to end abortion, the human rights issue of our day, and provide political, legal, and community support for women and their children, born and preborn. Headquartered in Fredericksburg, VA, SFLA has more than 1,300 groups on middle, high school, college, university, medical and law school campuses in all 50 states. SFLA creates strategy, policy and programming that connects those most targeted for abortion with people ready to help and builds a framework for political engagement on their behalf. SFLA/SFLAction has more conversations with those most targeted by the abortion industry every day, week, and year than any other pro-life outreach in the world. Every week, Students for Life entities reach more than 2 million people across social media platforms to have nearly 200,000 digital conversations. Under the leadership of SFLA/SFLAction President Kristan Hawkins, who was recruited to build the organization, SFLA has grown over the last 16 years into a $15 million organization preparing for a Post-Roe America.