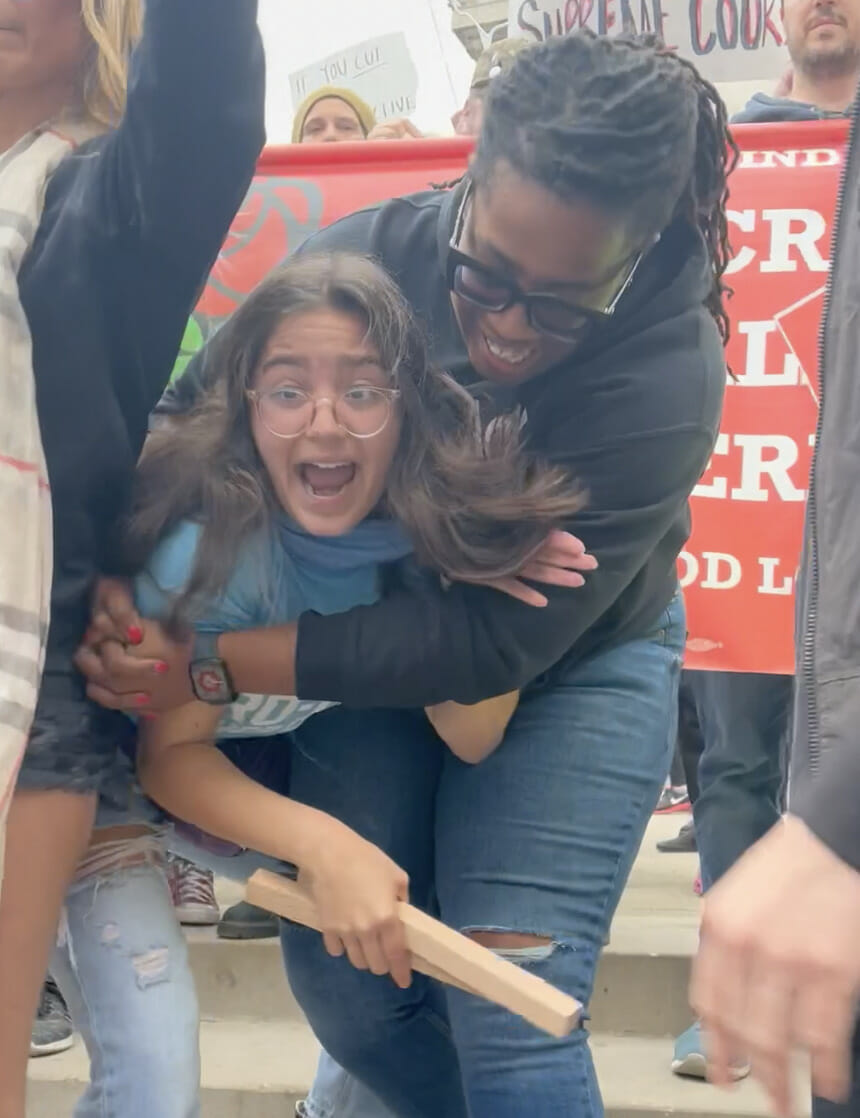 GUEST POST: There comes a time when one must take a position that is neither safe, nor politic, nor popular, but he must take it because conscience tells him it is right.” – Martin Luther King Jr.

On the evening of Wednesday, May 4th,  pro-abortion protestors organized a “Defend Roe Emergency Rally” in the heart of downtown Indianapolis at the steps of Monument Circle.

The organizing group, the Party for Socialism and Liberation, urged everyone online to go “all out to the streets.” With a large pro-abortion crowd, they “would make it clear that without justice there can be no peace.”

After months of Students for Life of America (SFLA) door knocking and mobilizing pro-life students to speak up, we weren’t about to allow such a rally pass in silence. We could not allow pro-abortion propaganda to hijack our city. If killing children is wrong, we have the duty and responsibility to protect life in law. We owe it to our children to speak up.

Over 30 members of the Pro-Life Generation gathered in counter protest to show the city of Indianapolis that we have just as much passion, zeal, and energy for our cause as they do theirs. We were joyful and celebratory as the United States Supreme Court appears ready to strike down the bloodiest court case in our nation’s history.

When we marched towards Monument Circle, the thirty of us realized we were walking up to a crowd of at least three hundred abortion supporters. While we were outnumbered, we knew they couldn’t match our resolve. It wasn’t until our arrival at Monument Circle that we saw just how unhinged the pro-abortion movement had become.

Immediately upon arriving, my group members and I were shoved, grabbed, and swarmed as we tried to ascend the steps of Indianapolis’ biggest monument where everyone was gathered. View the video below to see some of the attacks:

Monument Circle is public property, and we had as much right to be there as they did. But for all its talk of “justice,” the abortion lobby never plays fair. Rather than sharing the space, we were assaulted, harassed, shoved by hands and bicycle tires, screamed at, and pushed off the steps of the monument by the abortion lobby. All of this merely because we believe children have the right to live. Their behavior was despicable.

It was no longer a rally—they had turned it into a riot.

At one point, I was aggressively grabbed from behind by the spokesperson for Indy10 Black Lives Matter, Jessica Louise. She held me against my will and screamed directly in my ear before finally letting me go and pushing me away. I kept saying, “I have a right to be here.”

This is the irony of the abortion lobby. They call themselves ‘pro-woman’ and yet physically assault women. They talk about protecting women and yet violently attack them. They do not want other options for women—their actions show anything but concern for women.

They want abortion and abortion only.

For hours, our group stood our ground amidst the chaos. In addition to being assaulted, we were taunted, harassed, mocked, flipped off, and wished ill will. The abortion supporters brutally harassed minors and doxed high school students’ names on social media who agreed with our side. When we paraded around the monument, they began to follow, screaming after us, “My Body, My Choice.”

However, despite the abortion lobby encircling us all around, we continued to sing and chant for joy about the end of Roe v. Wade.

When the intimidation and harassment became too much, I decided to have my group leave for their safety. Without any police in the vicinity and with my group being mainly high school volunteers, I knew I needed to keep them safe and leave rather than try to find an officer.

Yes, the abortion lobby is frightening. But we cannot be cowed into silence right now. We cannot let fear of rejection or fear of ‘making a scene’ keep us from spreading truth. Even if we are outnumbered and intimidated, we will not back down from what is right and just. We have to respond to the crisis of abortion. We have to protect this country from abortion violence—even though we know violence may be hurled our way for doing so.