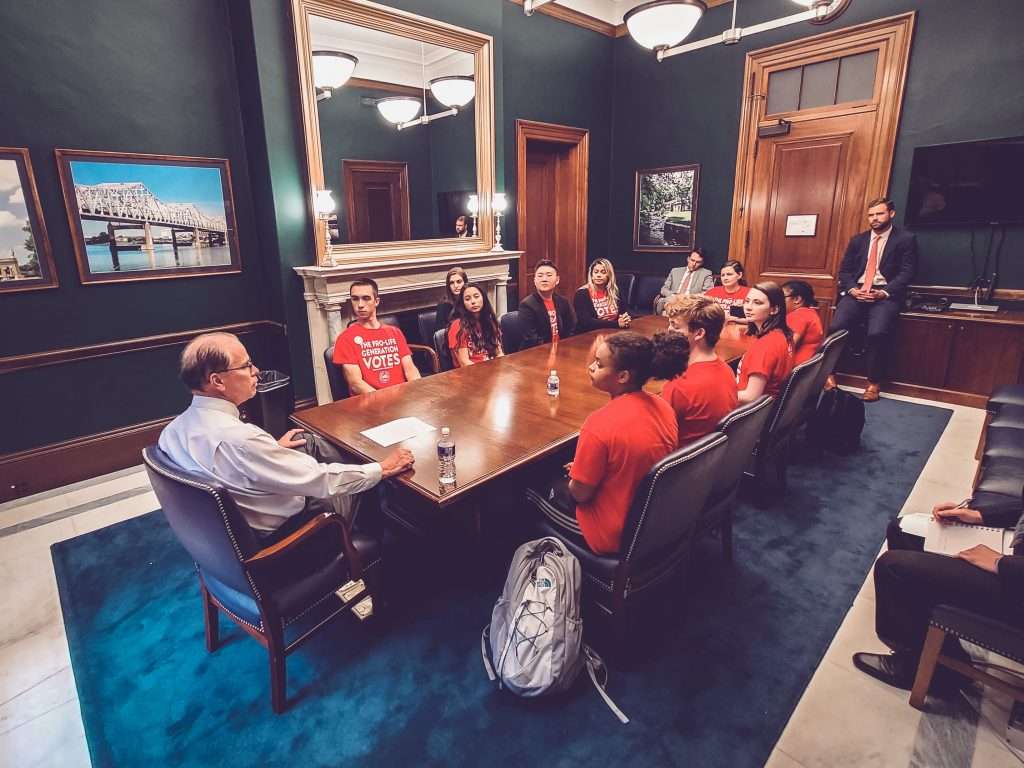 With little more than 3 years in direct political engagement, SFLAction inspired or assisted with legislation in multiple states, including most recently Oklahoma.

As reported in the Washington Post: “This is a whole new ballgame,” Kristan Hawkins, president of Students for Life Action, one of the country’s biggest antiabortion groups, said in an interview. “The 50 years of standing at the Supreme Court’s door waiting for something to happen is over.”

WASHINGTON D.C. (05-05-2022) – Students for Life Action President Kristan Hawkins released SFLAction’s 2021 & 2022 Legislative Sessions Report noting that in only about 3 years of active policy engagement, SFLAction tracked more than 1,000 abortion-related bills, engaged in 30 states, inspired or helped introduce 15 bills, as well as continues activating and organizing the Pro-Life Generation – Millennials and Gen Z – now 31% of the electorate. “Our sister organization, Students for Life of  America, has trained more than 130,000 Millennials and Gen Z for effective advocacy over its history,” observed Hawkins. “SFLAction has kept the Pro-Life Generation at work since the last election cycle to protect life in law and in service.”

As Hawkins recently wrote in a letter to Congress, “According to the CDC, more than 9 out of 10 abortions take place by 12 weeks (92.7%), which means that if we are not focusing on limiting early abortions, we are not really addressing the violence of abortion at all. And after 50 years, it’s time for a real conversation in legislatures, communities, churches, and courts on how to protect life in law and in service.”

“Nationally, the pro-life movement is on the offensive and wields legislative momentum as it relates to abortion. Figures from The Guttmacher Institute reveal that in the 2020 and 2021 legislative sessions combined, well over one thousand pro-life laws were introduced.

“The Guttmacher Institute reports that, as of April 15, 536 pro-life bills had been introduced in 2022— an expected decrease from 2021, which was a record year for pro-life legislation. In 2021, in fact, more than one hundred of the 663 pro-life billsintroduced were enacted into law — a number that prompted Guttmacher to label 2021 ‘the most damaging antiabortion state legislative session ever.’”

The Fine Print: Bills and Measures in Motion

SFLAction Inspired and Helped Introduce the Following Bills at the State & Federal Levels:

SFLAction’s engagement in Oklahoma earned extensive attention recently. In an article entitled, “Oklahoma Legislature Passes Near-Total Ban on Abortion,” CNN author Veronica Stracqualursi gave SFLAction credit for working behind the scenes on the passage of the bill, writing, “Legislators had worked closely on the bill with the national anti-abortion group Students for Life, which celebrated the bill’s final passage on Tuesday.”

“Protection At Conception” is SFLAction’s Goal — And It’s Attainable

SFLAction’s legislative goal is to see the strongest pro-life protections possible enacted at every level of government.

To this end, SFLAction and Students for Life of America (SFLA) have long stood firmly against discriminatory carveouts, especially rape and incest exceptions, made to otherwise strong pro-life legislation. In April 2022, the Los Angeles Times reported: “Support from groups like Students for Life helped give political life to more stringent abortion bans once viewed as politically impossible.” The LA Times continues, quoting legal scholar and author Mary Ziegler, who acknowledged: “Groups like Students for Life were embracing positions that [the mainstream antiabortion movement] wouldn’t have, at least as openly.”

SFLAction also trailblazed the trend of Life at Conception laws, which have now passed in numerous states. SFLAction vocally rejected the popular notion that consensus could only be solidified around protecting children from late-term abortions. With 95 percent of abortion victims being killed in the first trimester, SFLAction rejected attempts to solidify pro-life support around 15-week abortion bans and instead went all-in for early protections. We worked with stalwart legislators who were committed to casting a much wider net of safety for the preborn and their mothers — and this strategy proved correct.

Posted this week, you can read more about SFLAction’s work in the Washington Post: The next frontier for the antiabortion movement: A nationwide ban or in the Associated Press: Leaked court document galvanizes anti-abortion activists and also in the Daily Wire in Hawkins’ op-ed, titled: The Real Work Begins after Roe v. Wade is Overturned

To be added to the media list, email: [email protected]