Noblesville HS Freshman Receives the Right to Start a Students for Life Pro-Life Club, as Part of On-Going Lawsuit 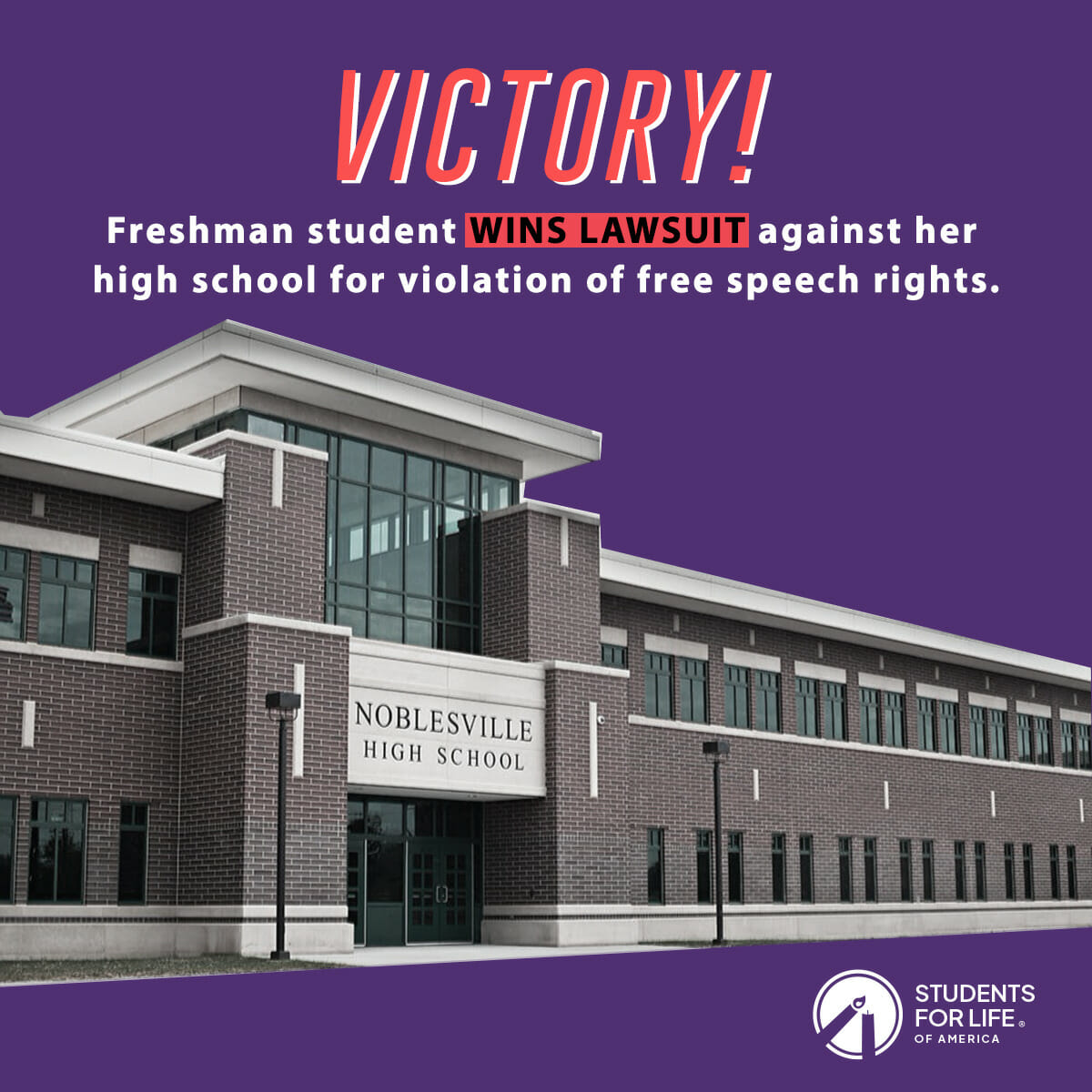 “A right to free speech or freedom of assembly only really exists when you can exercise those freedoms,” said Students for Life of America President Kristan Hawkins. “School officials created a virtual smoke screen of a process, hiding a path forward from a young girl who wanted to share a pro-life message.”

NOBLESVILLE, IN/INDIANAPOLIS, IN/FREDERICKSBURG, VA (02-02-2022) – Students for Life of America President Kristan Hawkins along with attorney Zac Kester of Charitable Allies, of Indianapolis, announced Thursday that while a lawsuit against Noblesville School District and high school along with named school leaders continues, a partial agreement had been reached allowing a high school freshman to start a Noblesville Students for Life pro-life club. “In addressing abortion—the human rights issue of our day—we have no time to waste as popular culture and a well-funded abortion industry targets young women, pressuring them to end young life by taking away their hope for a future,” said Hawkins. “At Students for Life of America, we’ve seen how personal engagement with loving, pro-life friends saves lives, and we are proud to fight for our student’s right to have a voice in her school.”

Kester noted that much of the school’s arguments against the student’s efforts—a minor known as E.D. in the lawsuit—involved adult disapproval of E’s handling of the application process, an unwritten, unpublished, uncommunicated protocol known to varying degrees only to four different school officials, and confusing to the student trying to share her passion for mothers and their children, born and preborn.

“E.D. has suffered immense harm as she was unable to promote the opportunity to attend the March for Life or the National Pro-Life Summit in what may very well be Roe v. Wade’s last anniversary as it is,” said Kester. “Hiding behind technicalities doesn’t change the fact that a young girl was not allowed the same opportunities to talk with her fellow students that others enjoyed.”

Sadly, teacher engagement and bullying made E.’s freshman year even more stressful. When the lawsuit was first filed, E.D. said: “I wanted to start this club to inspire like-minded students to advocate for our most vulnerable and point students to resources designed to uplift them in their time of need. I knew some people would disagree with me, but I never expected to be attacked online—especially by my teachers.”

Students for Life has written previously on the case, noting that during the process of attempting to get approval for her club, E.D. showed school officials a flyer that “included a photo of young students in front of the United States Supreme Court Building in Washington D.C. holding signs that read, ‘We are the pro-life generation’ and ‘Defund Planned Parenthood.’” Both signs are part of the Students for Life of America messaging at pro-life events nationwide. E.D. reported that after seeing those images, school officials became unresponsive and unavailable as she tried to get the club started.

Sadly, viewpoint discrimination is common across the country, as Hawkins wrote in a Wall Street Journal op-ed piece. Of the common strategies by administrators to oppose free speech, the third, fourth and fifth listed below seem prevalent in this case:

The matter has been filed in the United States District Court Southern District of Indiana, Indianapolis Division. Click here for a link to the case.

Charitable Allies is a non-profit legal aid law firm based in Indianapolis that provides affordable legal services and education to nonprofit organizations nationwide.

Zac Kester can be reached at [email protected]