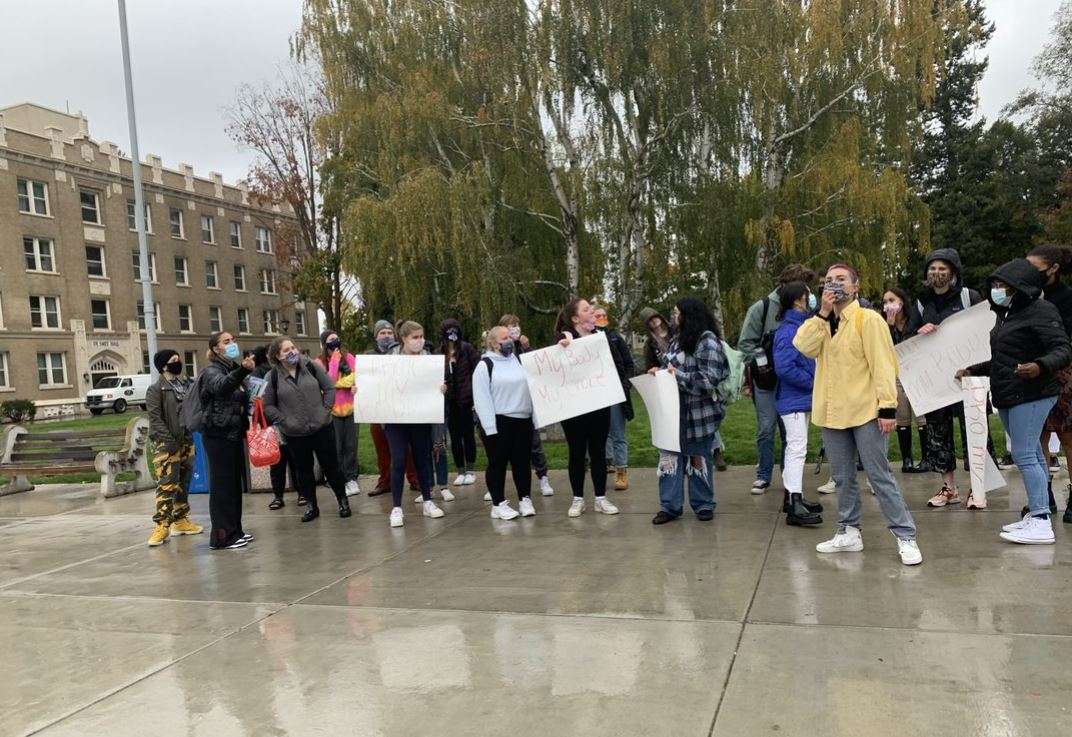 The state of affairs at Catholic and Christian schools would likely shock anyone who graduated from such a school more than a few years ago. They are no longer safe havens for students who reject abortion violence. When Students for Life at Gonzaga did a pro-life display this week, pro-abortion students on the Catholic campus protested in full force, pitching a fit of epic proportions. 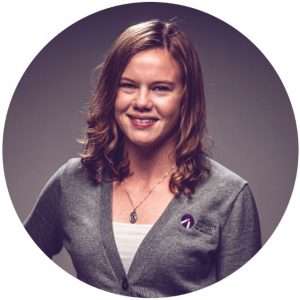 When I traveled to Spokane this week to visit Eastern Washington University (EWU) and Gonzaga University (GU), I knew two days of the Planned Parenthood Cross Display was going to be a lot of work. Setting up 972 crosses is a big job, even with help from the students! What I didn’t expect was the aggression from people on campus.

EWU Students for Life started as a new group last school year during the lockdown, so this was their first Students for Life display. It started out fairly normally, though it seemed their peers on campus didn’t quite know how to have good conversations about abortion.

We received several rude remarks in passing, but were able to have a couple civil discussions as well. Shortly after noon, however, a student ran to the other side of our display and started screaming “my body, my choice,” and “f**k them kids,” while holding her middle fingers in the air. Other students on campus cheered for her and some began to join her. 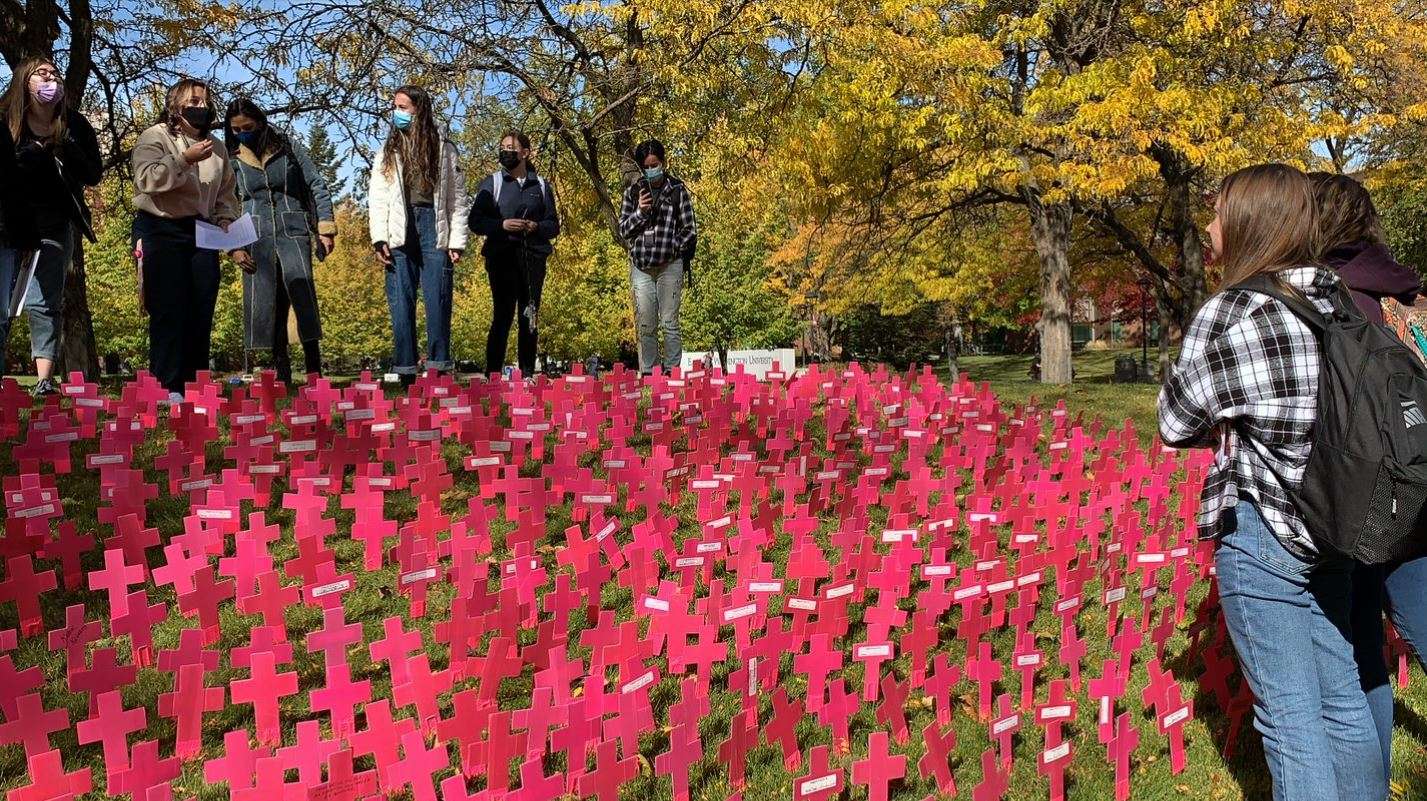 Pro-life students tried to speak with her and have a discussion about the issue, but as she said, “I’m advocating for women and I’m advocating for abortion, period. That’s all I’m going to talk about with you… I don’t need to engage in any kind of conversation with you.”

At one point, a girl came up and told the male students at the display that they shouldn’t be there because she could “see that they have d*cks,” and told the women they were terrible for letting the men dictate what they should do. When I told her it was actually me, a woman, who brought the display to campus, she again told us how terrible we were, told the guys they were ugly, and stomped off to join the group of protesters.

It was an intense day, especially for a group of students who were fairly new to pro-life activism. Despite the chaos, the students remained calm, were in good spirits and planned to meet for dinner that night to discuss the whole situation together. They represented the pro-life movement well.

The next day, we set up the display at Gonzaga and began handing out info cards to students walking by. I told the GU students about my crazy day on Tuesday, and we were all sure we would have a much less eventful day at this Catholic university.

But I was wrong. Just after noon, like clockwork, a group of students formed, claiming the display was making a lot of people uncomfortable (as abortion should), and we had another protest on our hands. This time the group was much larger, more organized, and they had signs as well. They even brought out some sidewalk chalk, although the rain washed it away pretty quickly.

Some chants we heard on Wednesday:

This group at least, was more willing to engage in discussion and didn’t resort to personal attacks quite as blatantly. A student approached them at one point and said “I agree with you guys, but yelling might not be the best way to go about this,” to which he was answered, “OUR BODIES, OUR CHOICE!”

I was truly shown the beauty of the pro-life movement both days, as students who didn’t even know us came to stand alongside us in support, offered to get us coffee, and practically forced me to take the hat and gloves they brought (since I was unprepared for the below freezing weather we experienced). They endured the screaming and insults to stand peacefully for the value of every human being, born and preborn.

To add insult to injury, pro-choicers on Gonzaga’s campus are now encouraging students to file harassment reports against the Zags for Life group because of the display. They cited “gender-based oppression…” Maybe they forgot they were the ones yelling “no uterus, no opinion.” 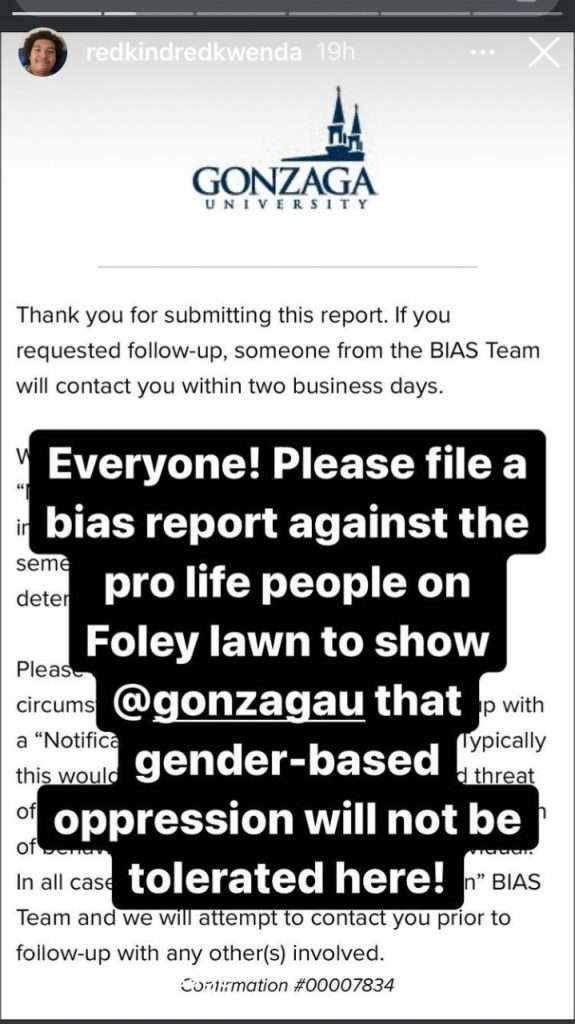 AND STILL, the story keeps getting worse. As of October 15th, 2021, unknown but presumably pro-abortion vandals TP’d the home of the president of Gonzaga’s Students for Life group in what may have been a viewpoint-driven hate crime. 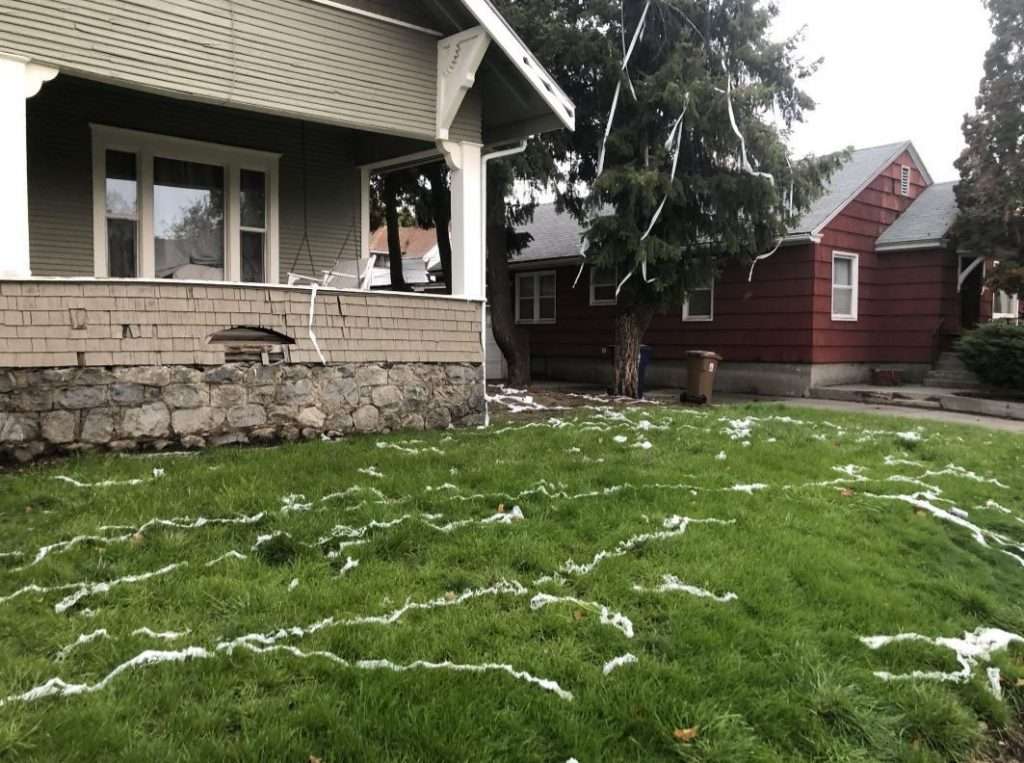 Students for Life of America will continue to stand with the Pro-Life Generation, supporting them no matter what hatred and obstacles we face in our fight to abolish the greatest human rights injustice our world has ever known.