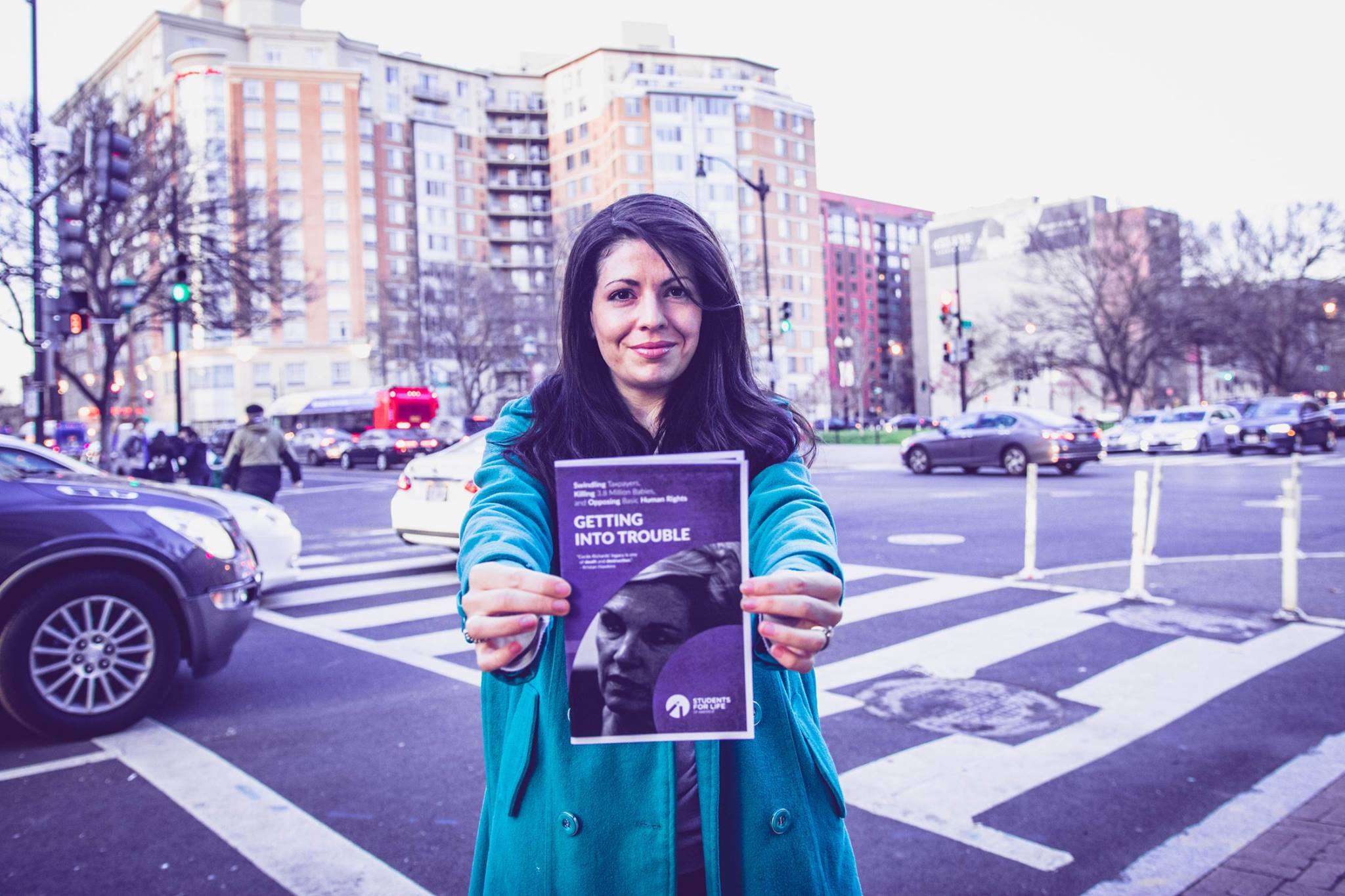 Everyday in America, pro-life students are ending abortion. The young people of this generation have survived abortion and have dedicated their lives to ending the greatest human rights tragedy our world has ever known. Yet, their stories, which are real and messy, won’t make the news headlines. However, they must be told. It will be their stories that inspire and encourage others to join with us to abolish abortion in our lifetime.

The Case for Life: Equipping Christians to Engage the Culture
Scott Klusendorf
256 pages (2009)

The Case for Life provides intellectual grounding for the pro-life convictions that most evangelicals hold. Author Scott Klusendorf first simplifies the debate: the sanctity of life is not a morally complex issue. It’s not about choice, privacy, or scientific progress. To the contrary, the debate turns on one key question: What is the unborn? From there readers learn how to engage the great bio-tech debate of the twenty-first century, how to answer objections persuasively, and what the role of the pro-life pastor should be.

This children’s book advances a real understanding of life in the womb and provides a look inside the womb based on when the preborn are first able to hear outside noise and what they might remember. The book includes, at the end, a short timeline of development with actual medical and scientific sources referenced so that parents and growing children can see real evidence that what the book teaches is true.

Why Pro-Life: Caring for the Unborn and Their Mothers (Today’s Critical Concerns)
Randy Alcorn
144 pages (2004)

If pro-choicers are right, precious freedoms are in jeopardy. If pro-lifers are right, innocent children are being robbed of their most basic freedom—life. We need clear and credible answers to the central questions of the abortion debate. For those who have had abortions or are currently considering one, for pro-choicers and fence-straddlers alike, Why Pro-Life? provides answers to these questions in a concise, straightforward, and nonabrasive manner.

Dr. R.C. Sproul employs his unique perspective as a highly experienced pastor-theologian and a trained philosopher to provide well-considered and compassionate answers to the difficult abortion questions. Dr. Sproul considers both sides of this issue in terms of biblical teaching, civil law, and natural law.

Abby Johnson quit her job in October 2009. That simple act became a national news story because Abby was the director of a Planned Parenthood clinic in Texas who, after participating in her first actual abortion procedure, walked across the road to join the Coalition for Life. Unplanned is a personal drama of life-and-death encounters, a courtroom battle, and spiritual transformation that speaks hope and compassion into the political controversy that surrounds this issue.

A thoughtful and compassionate guide to today’s most controversial issue. Without sounding “judgmental,” demolishes the pro-choice position.

This is a unique and uncensored expose’ of the American abortion industry. It fully documents that women are being sexually assaulted, mutilated, and killed inside perfectly legal abortion clinics. It also shows how pro-choice groups have used raw political power to fight off regulation of the abortion clinic business.

The greatest questioner of all-time returns to contemporary society to interrogate abortion debaters. Is abortion a woman’s right? When does human life begin? Should we legislate morality? What would happen if Socrates suddenly appeared in modern Athens? Peter Kreeft imagines the dialogue that might ensue with three worthy opponents–a doctor, a philosopher and a psychologist–about the arguments surrounding abortion. Kreeft uses Socratic technique to strip away the emotional issues and get to the heart of the rational objections to abortion. Logic joins humor as Socrates challenges the standard rhetoric and passion of the contemporary debate.

President of Operation Rescue and adoptee Troy Newman wrote this book as a result of his years of work in the pro-life movement. The contents are a sum of the great teachings from the author’s pastors, leaders, collaborators and individuals who shared biblical insights with him.

Swedish photographer Nilsson presents a hundreds of pictures about the transmission of life, including many graphic color images of aborted children, and embryos in vivo.

Pro-Life Action League founder Joseph Scheidler (1927-2021) has been called the “Godfather of Pro-Life Activism” and led a singular life devoted to defending our unborn brothers and sisters. Now you can read his story in his own words.

Brennan shows how the same dehumanizing language has been used to justify not only abortion but all of the worst crimes against humanity.

Papal encyclical clarifying the Catholic Church’s position on the inviolability and value of human life—not only addressing abortion but euthanasia and capital punishment. Infallibly and irreversibly condemns murder, abortion, and euthanasia.

Papal encyclical reaffirming Catholic teaching against abortion, contraception, and sterilization. Promotes Natural Family Planning and makes amazingly prescient predictions about the direction the West was taking, all of which have proven true since.

Becky Fraser was an unmarried college student who became pregnant. Using her experiences, she wrote this book to help women sort out their options and ask the important questions. But even more important, Fraser will help you overcome your fear, take control and move ahead, confident that you can stand up and handle the details of this very important time in your life.

Whether you’re pro-life or pro-choice, you probably agree on one thing: abortion hurts women, both mentally and physically. Unfortunately, both sides are guilty of ignoring the individual in favor of the higher moral ground. This book is designed to help people heal from their abortions and put guilt, shame, fear, and doubt behind them.

O’Neill—actress, model, and national spokeswoman of Silent No More—draws on her own experiences with post-abortion syndrome to show women that Christ still loves them even if they have sinned; and that healing is possible.

An internationally known expert in the field of human sexuality and abortion, Dr. Willke has been a practicing physician for over thirty years. Author of seven books, he has lectured around the world for over two decades. His in-depth knowledge of today’s abortion culture and the Right-To-Life movement has made him uniquely qualified to speak on its analogy to slavery.

The Abortion Paper: Inside the Abortion Mentality
Bernard Nathanson
240 pages (1984)

Dr. Nathanson, a former abortionist and co-founder of NARAL, criticizes the faulty reasoning behind the pro-choice position.

An exposition of the nation’s largest abortion provider, Planned Parenthood.

An explanation of the difference between contraception and abortion; and how many so-called “contraceptive pills” are actually abortaficients.

Life Issues, Medical Choices not only provides answers to many questions troubling Catholics; and supplies fundamental principles of Catholic thought to help readers arrive at morally sound decisions in those areas that have yet to be settled.

Kischer, a scientist, and Irving, a philosopher, biochemist, and bioethicist, ask, ‘is the human being and the person the same thing–or not?’ Referenced, fully indexed and written in laymen’s terms, this book is a resource for anyone seeking the truth about the science of human embryology.

A brief critique of Margaret Sanger.

A philosopher considers the questions of abortion and euthanasia.

A comprehensive analysis of the abortion debate.

Legal scholar Rice lays out a comprehensive, consistent vision of the pro-life view.

Thorough explanation of sixty-nine ethical and philosophical arguments sometimes given to defend a pro-choice position and persuasive pro-life responses to each.

Politics for the Greatest Good: The Case for Prudence in the Public Square
Clark Forsythe
319 pages (2009)

Addressing the frustration in the pro-life movement in the wake of the Obama presidency, the senior counsel to Americans United for Life asks, ‘is it moral or effective to achieve a partial good in politics and public policy when the ideal is not possible?’ He answers affirmatively, and along the way helps readers understand the nature and value of prudence in the public square, especially when it comes to enacting a pro-life legislative agenda.

Who Broke the Baby: What the Abortion Slogans Really Mean
Jean Garton
141 pages (1998)

Solid responses to the slogans used to promote abortion by Lutherans for Life president Jean Garton.

Dr. Susan Stanford-Rue’s poignant story of her own abortion experience and the long process of healing thereafter. By prov­ing that women as well as infants are the victims of abor­tion, this timely, evocative book guides readers in reaching out with compassion and insight.