Since two students were arrested for trying to chalk BLACK PREBORN LIVES MATTER, an amicus brief has been filed, Billboards erected, the honors to the infamous Margaret Sanger targeted for removal, and the nation moves closer to a world without Roe.

“Our efforts to make a statement about the value of preborn life in the minority community have expanded from the courts to the community, and we are not going to silent about our desire to protect innocent life,” said Students for Life of America’s Kristan Hawkins.

“If the law will not protect preborn life, we must change the law.”

“The way these pro-life students were treated one year ago one would think they attempted robbery,” said Rev. Dean Nelson, executive director of Human Coalition Action, who witnessed the arrests. “All they were doing is exercising their right to speak on behalf of the voiceless; the unborn and in particular, Black and Brown children who are the primary targets of Planned Parenthood.”

WASHINGTON D.C. (08-02-2021) – “A lot has changed on the one-year anniversary of the arrests of two students for trying to chalk BLACK PREBORN LIVES MATTER, but the legal actions in both cases continue,” said Students for Life of America President Kristan Hawkins, noting that legal action in the D.C. courts against two students is ongoing as is a federal case against the D.C. government. On the one-year anniversary of the arrests of two students who were part of an event sponsored by Students for Life and the Frederick Douglass Foundation, the criminal cases against the students remains in limbo while the federal, free speech case awaits a decision from the District Court on the District’s Motion to Dismiss, which will determine next steps in the case.

Elissa Graves, legal counsel for Alliance Defending Freedom (ADF) handling the case said, “Washington D.C. discriminated against pro-life speech by allowing some voices to be heard, while censoring Students for Life of America and Frederick Douglass Foundation. The city showed clear hostility towards those expressing a life-affirming message. The right to free speech is for everyone – not just those in power.”

Following those arrests, Students for Life and the Frederick Douglass Foundation: 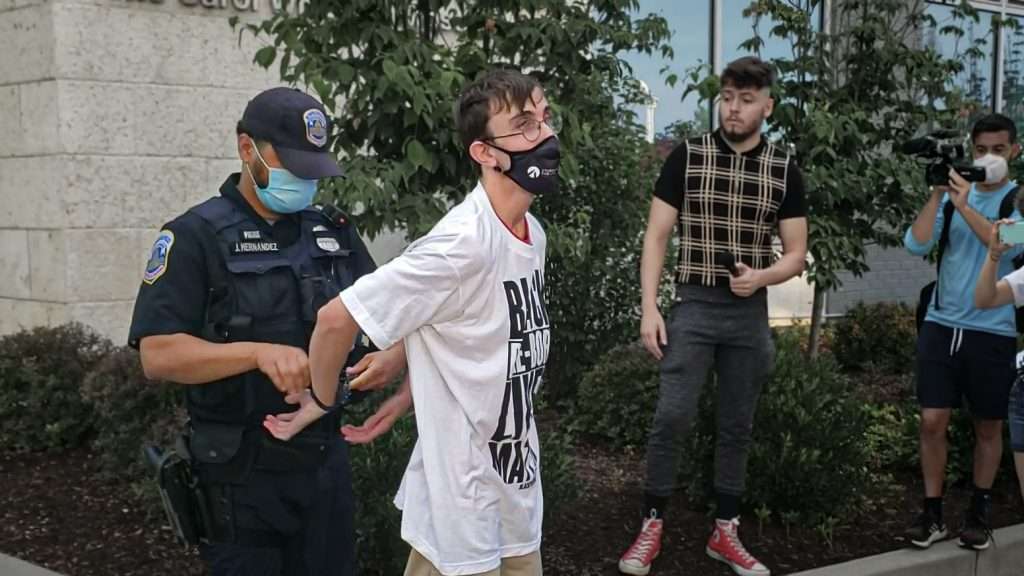 Students for Life also launched an #SOS Campaign, Strike Out Sanger, to remove honors to the known racist and eugenics enthusiast who founded Planned Parenthood. Initial targets were the Smithsonian’s National Portrait Gallery and at Margaret Sanger Square in Manhattan as well as a Margaret Sanger statue stands in the Old South Meeting House in Boston, which ironically enough is on the Freedom Trail commemorating the Revolutionary War.

Today, SFLA is holding Planned Parenthood and its abortion industry allies accountable for reckoning with their own violence and racism. Through our Strike Out Sanger campaign, we have called for numerous public and private entities — including universities — to immediately stop honoring Margaret Sanger as a feminist icon. SFLA activated nearly one hundred people to call on Chatham University to rename “Sanger Hall” and remove a bust of Sanger surrounded by deceptive language calling Sanger an “advocate for women.” The school removed the bust but kept the Sanger’s name and the fawning language about Sanger in the alcove where the bust had been.

This Fall, Students for Life will mobilize alongside allies at the Douglass Leadership Institute to demand the removal of Margaret Sanger’s name from a Stony Brook University dormitory. The building is in a quad dedicated to “heroes,” and situated right next to a dorm named after abolitionist and statesman Frederick Douglass — an actual hero. Planned Parenthood must make reparation for its central act of racism and discrimination, which is killing preborn lives in abortion violence. And the broader culture must acknowledge that the US abortion industry’s legacy is one of discrimination, eugenics, racism, and hate.

Students for Life and Human Coalition Action also this week filed an amicus brief noting that the social destruction of abortion has taken a huge toll on black lives.

As noted in the announcement: The brief points out that Black and minority communities have paid a tremendous price in lives lost, a consequence of the racist agenda of U.S. abortion industry architects such as Planned Parenthood’s founder Margaret Sanger. The amicus observes, “Justice Thomas’ devastating rendering of the history of eugenics and abortion aptly depicts abortion as a tool eugenicists utilized to extinguish minority populations whom they deemed ‘unfit’.” To access the brief, click here.

“Until we protect vulnerable lives in the law from the devastation of abortion, Corporate Abortion and their disreputable allies will continue to push taxpayer funded death in the name of the Constitution. Whether we say it in paint, chalk, print or court, Black Preborn Lives Matter,” said Hawkins.

You can learn more about our efforts at BlackPrebornLivesMatter.

At Newsweek: read more from Hawkins and Toni Peterson on why we must be free to speak in defense of minority lives. In USA Today, read more on Sanger’s racist past from Hawkins.

Click here for a video at Breitbart comparing how pro-life Americans were treated in Washington D.C. compared to Black Lives Matter protestors.