Reposted from Townhall.   Yesterday, I delivered an address at Wellesley College in Massachusetts as the first stop on my fall speaking tour entitled, The Future Is Anti Abortion: Preparing For A Post-Roe America.I was eager to speak at Wellesley because I believe it’s crucial to engage with students who don’t understand the pro-life worldview. And ahead of my visit, Wellesley students provided ample evidence that they hate not what we actually believe, but what they think we believe. Students prepared for my visit by disseminating a 30-page document in which they attached every unfounded, trendy label they could to smear my name and included

It’s Not Pro-Lifers Who Are Controversial – It’s Abortion

The majority of the population is not a fan of controversy or confrontation. In psychological circles, “conflict avoidance” is the lexicon for people who prefer to go with the status quo and not ruffle feathers. Being confrontational may go against many of our sensibilities in the pro-life movement… but we must embrace controversy if we want to abolish abortion. 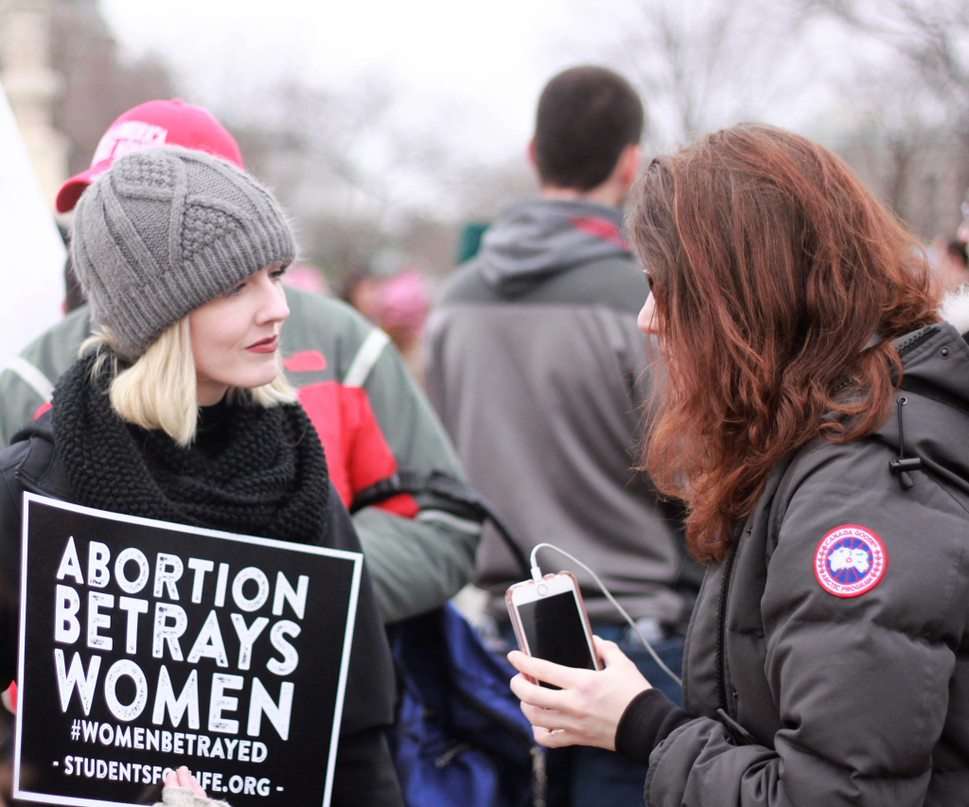 Confrontation is necessary to advance the pro-life cause. Important to note is that confrontation is NOT synonymous with violence; we condemn violence in all forms. What it does mean is the willingness and courage to show up where abortion battles are being fought and to have the hard conversations. We confront the controversy of abortion, wherever it is, and in whatever form. If we truly believe abortion is the greatest evil of our generation, then we are obliged to speak against it, at every opportunity possible.

If abortion isn’t a big enough deal to encourage us to be uncomfortable… then what is?

There is a time and place for confrontation, just as there’s a time and place for one-on-one dialogue, silent prayer, or the sharing of an abortion testimony. Certain circumstances call for evil to be confronted loudly and unapologetically, and failing to do so in those times and places would actually constitute failure on our part to defend Life.

It’s important to remember why we engage in critical battles outside of the Supreme Court, state houses, and other places where political abortion decisions are made. The reality is that protests are a form of public policy and legislators see (and listen to) large crowds. Being in the crowd lets us put forward the pro-life message and ensures that our elected officials, the media, and media’s consumers hear from us, too.

We are not the controversy – abortion is. We are not hurting people by speaking the truth; it’s abortion that hurts. We are called to speak the truth with charity and love.  We are trying to abolish abortion, which will end the hurt that abortion brings.
Students for Life’s Sarah Michalak had an experience with confrontation in Chicago:
“We were protesting a big pro-abortion crowd that was calling for abortion all nine months in Illinois. We were there to fight their narrative, show that they are not the only ones that care about this issue, and that pro-life Illinoisans did not want their proposed law. The Crusaders for Life are an amazing community group that is super impactful! The abortion crowd was literally losing their minds over us being there, screaming profanities and venomous hatred at us. Then, the Crusaders who were helping me counteract the crowd with their drum line and chants knelt down and sang.
There were 25-30 of us there and close to 500 of them there, but when the Crusaders started to sing, their crowd seemed miniscule. The message of hope and love was presented, not by avoiding confrontation, but by being bold yet respectful while sharing the truth. Confrontation does not need to exclude healing, especially when we offer love in return for hate.” 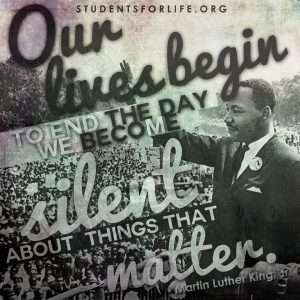 Dr. Martin Luther King, Jr. (MLK) is a household name not only in America, but around the world. He is so well-known because he helped usher in racial and legal equality in America. We now have a lot of respect for him and the rest of the people who participated in the Civil Rights Movement, but what about in MLK’s day?

A lot of people did not like him. He was holding demonstrations and marches and protests in several different cities which was very controversial. MLK intentionally paraded knowing that he was going to create controversy and he, like many others, ended up in jail.

While MLK was in jail, eight clergymen hand-drafted a letter to him entitled “A Call for Unity.” They wrote things like:

“Such actions as incite to hatred and violence, however technically peaceful those actions may be, have not contributed to the resolution of our local problems. We do not believe that these days of new hope are days when extreme measures are justified in Birmingham.”

“When rights are consistently denied, a cause should be pressed in the courts and in negotiations among local leaders, and not in the streets.”

These faith leaders were essentially blaming MLK for the violence in Birmingham and suggesting that Dr. King was creating controversy just to cause a stir. Hindsight is always 20/20, but this sounds crazy to us today because we know how important MLK’s peaceful actions actually were to creating racial equality in America.

Dr. King’s response to them was his famous “Letter from Birmingham Jail.” He starts by asking about their motives and asks them what they really care about:

Dr. King marched and protested for the same reasons pro-life students go out on campus to educate others about abortion: because he cared about a violation of human rights. Controversy is not something that we should generally just go looking for. Like MLK, we must decide that the injustice of abortion is worth creating controversy for so that we can expose it.

Is It Possible to Fight Abortion without Controversy?

No, probably not. And here’s why:

Not All Controversy is Created Equal

Activists can be hated for two different reasons: our message or our personal character. Ideally, it should be the message that offends someone and not the messenger. The beliefs should cause a dispute, not the activist’s behavior. Activists should ask themselves, why is someone getting mad at them? Is it because they’re revealing the injustice of abortion? Or is it because they are yelling at them or being rude? If they are offended by the messenger’s behavior rather than their ideas, minds won’t be changed. A dissenter may not remember exactly what we said, but they will remember how we made them feel.