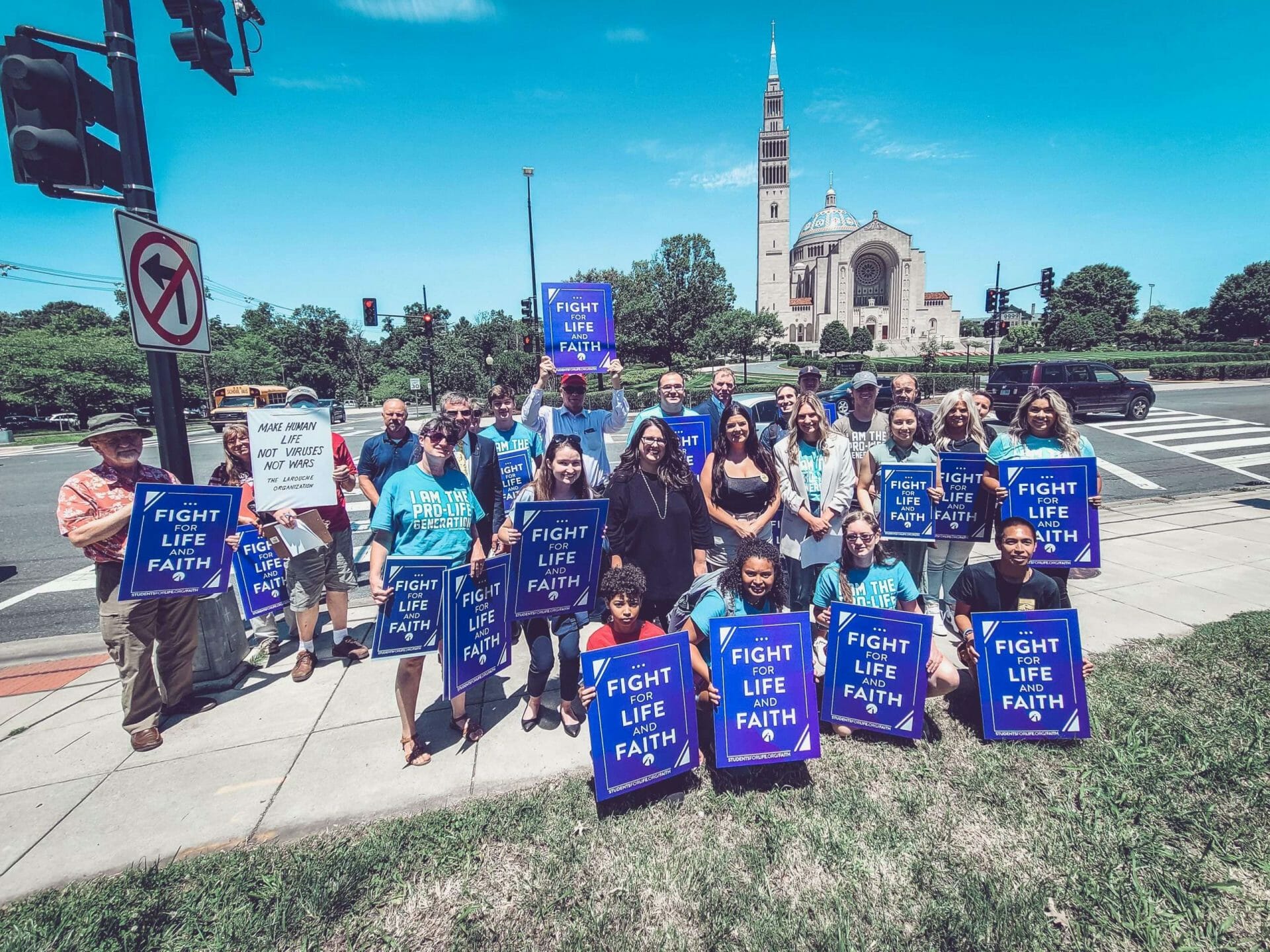 “We rallied to encourage our US bishops in seven cities, urging them to fight for the Christian faith and defend the lives of the preborn from abortion violence,” said Kristan Hawkins, President of SFLA/SFLAction.

WASHINGTON, D.C. (06-17-2021) – Yesterday, Students for Life and pro-life allies rallied in seven cities as part of SFLA’s Fight for Life & Faith campaign. The rallies were planned to coincide with a national, virtual gathering of the United States Conference of Catholic Bishops (USCCB) as the bishops determine what action should be taken in regards to the scandal of Catholic politicians defying Church teaching but insisting on participating fully in the Church by receiving Communion.

Today, the Students for Life & the Pro-Life Generation is gathering in 7 cities across America because the U.S. Conference of Catholic Bishops is beginning their crucial discussion about what to do about those in public spotlight who proudly profess their Catholic faith and insist on receiving Holy Communion, what we Catholics believe actually becomes the body and blood of our Lord and Savior, Jesus Christ, YET they support and vote to force every American to fund abortions in all nine months, for whatever reason.

Supporting and enabling the violence of abortion, violence that claims nearly 1 million preborn lives each year in America, is in direct contradiction to the teachings of the Catholic Church.

Today, we’re gathering because these one million preborn infants are under attack and so is our Christian faith.

I’m proud to be standing here as a convert to Catholicism as it was the Catholic Church’s firm adherence to Scripture, standing for truth no matter the cultural tides and political parties throughout history which is what first drew me to take a second look at our more than two-thousand year old faith.

These powerful politicians, public leaders — including President Joe Biden — are being politically abusive as they dust off their Bibles and personal religious history during their campaigns, only to pack it away when it comes time to govern, as they actively, aggressively, and relentlessly oppose church teaching – and they want taxpayers to pick up the bill…positions that the vast majority of Americans, regardless of faith, oppose.

This creates conflict within the Church and confusion as to how deeply we really believe.

As Catholics and Christians, we ask and expect women to make a sacrifices when it comes to an unplanned pregnancy, to sacrifice self for the life of an innocent other, no exceptions…but yet for powerful politicians special exceptions are made by our clergy, every Sunday and this not only violates Church teaching but it also endangers the soul of these politicians in mortal sin and shows our congregation that the Church must not really mean it when it comes to abortion. Because if it is okay to increase and fund abortion, then logically, many have come to believe, that it is ok to have one.

The stats from the pro-abortion Guttmacher Institute reveal that 54% of women who pay for abortions are self-identified Christians. This means Christian women/mothers are receiving mixed messages about abortion, sent and enabled by Church leadership.

No matter your faith background, Americans should be able to agree that the violence of abortion is the human rights issue of our day.

Today, the Pro-Life Generation is asking that the Catholic Church practices what it preaches, and we are asking that of every denomination.

We know SILENCE from Americans of good will in the face of this gruesome, evil reality of abortion is NOT an option.

So, today we are gathered here to FIGHT for our brothers and sisters in the womb who can’t fight for themselves, AND fight for the Christian faith, which upholds the dignity of every human life.

We aren’t here today to debate Catholic teaching on this matter. The Catholic Church is clear: Supporting the murder of innocent children is incompatible with the faithful practice of the Catholic Faith.  Now, we just need Catholic leaders to act like it.

In an op-ed this week at The Washington Times, Hawkins joined with SFLA/SFLAction Chief Media and Policy Strategist Kristi Hamrick, writing:

“On the issue of abortion, Mr. Biden’s deeds are in direct opposition to those taught by his church. His administration has pursued the most radical abortion policies in U.S. history working to end limits on taxpayer-funded abortion, expand abortion through foreign aid, open the door to more inhumane experiments with the body parts of babies taken from abortions and allow deadly, on-line, no-test Chemical Abortion sales, to name a few. The personnel he has surrounded himself with also consistently embrace the most radical of abortion policies. Many faithful Catholics find this heartbreaking.”

“Many of our leaders are defending abortion all in the name of peace and equality and human rights.  But what about the rights of the preborn women and men?  Where is the peace and equality for them?  Faced with the reality of the destruction abortion is causing to so many lives and families in our nation, SILENCE is simply NOT an option for good and Christian Americans.  We must stop the lies by speaking out courageously in defense of life and truth. Christian leaders have a moral responsibility to guide their flock to the truth and correct their errors — especially when those errors facilitate violence.”