Considering that Hollywood is far more likely to praise Planned Parenthood and ignore its troubling history, it’s refreshing to see the CW network’s Nancy Drew admit the truth about the abortion vendor’s sordid beginnings. While the show’s March 31 episode only acknowledged the eugenicist views of Planned Parenthood’s founder Margaret Sanger in passing, the fact that the line made it to air without being removed post-production is a welcome change.

The episode called “The Spell of the Burning Bride” centered around a haunted wedding dress that supposedly “tames the wildest dreams of women by suppressing their carnal desires.” But the dress’s magic backfired, and instead of turning women into “chase, submissive brides,” it rendered those who wore it mad enough to commit murder.

As the characters research the dress’s history, they discover it was created by ‘The Women in White,” a historical women’s group known for using magic. After Nancy’s friend George (Leah Lewis) commented on the news with disapproval, the teen detective’s ex-boyfriend Nick (Tunji Kasim) responded with a pointed remark about Planned Parenthood’s founding.

“Oh, so, the badass witchy types also dabbled in female repression. Not exactly the epitome of allyship,” George said.

Sanger was, in fact, the leader behind efforts to join the American Birth Control [League] with the American Eugenics Society. The former organization would later be renamed Planned Parenthood.

Records from the Margaret Sanger Papers Project also reveal Sanger’s opposition to legal immigration, her antisemitism, and advocacy for birth control to be used as a form of eugenics.

In her book, Women and the New Race, Sanger wrote that birth control “is nothing more or less than the facilitation of the process of weeding out the unfit, of preventing the birth of defectives or of those who will become defectives.”

Many of the Planned Parenthood founder’s writings even promoted the idea of “racial betterment,” and they contained warnings about “the rising stream of the unfit.”

Pro-life groups like Students for Life of America have been drawing attention to Sanger’s views regarding race and eugenics for years now. But Planned Parenthood continually downplayed these concerns, even going so far as to annually award its defenders with a Maggie Award, named in its founder’s honor.

It was only recently that the corporation officially disavowed Sanger. In a statement published last July, Planned Parenthood announced the removal of Sanger’s name from its Manhattan abortion facility, citing its founder’s “racist legacy” as the reason.

But renaming a building is merely performative, as Planned Parenthood still contributes to Sanger’s vision by profiting from the lie that some lives are disposable.

In the past decade, the abortion business accumulated $1 billion in excess revenue and nearly $6 billion in taxpayer dollars. The abortion vendor has also been accused of targeting minority women by placing abortion facilities within their neighborhoods.

Planned Parenthood’s history is rife with the dehumanization of innocent lives, and it is time for Hollywood to stop helping them cover it up and start drawing attention to it. 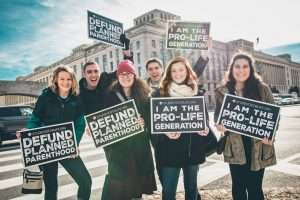