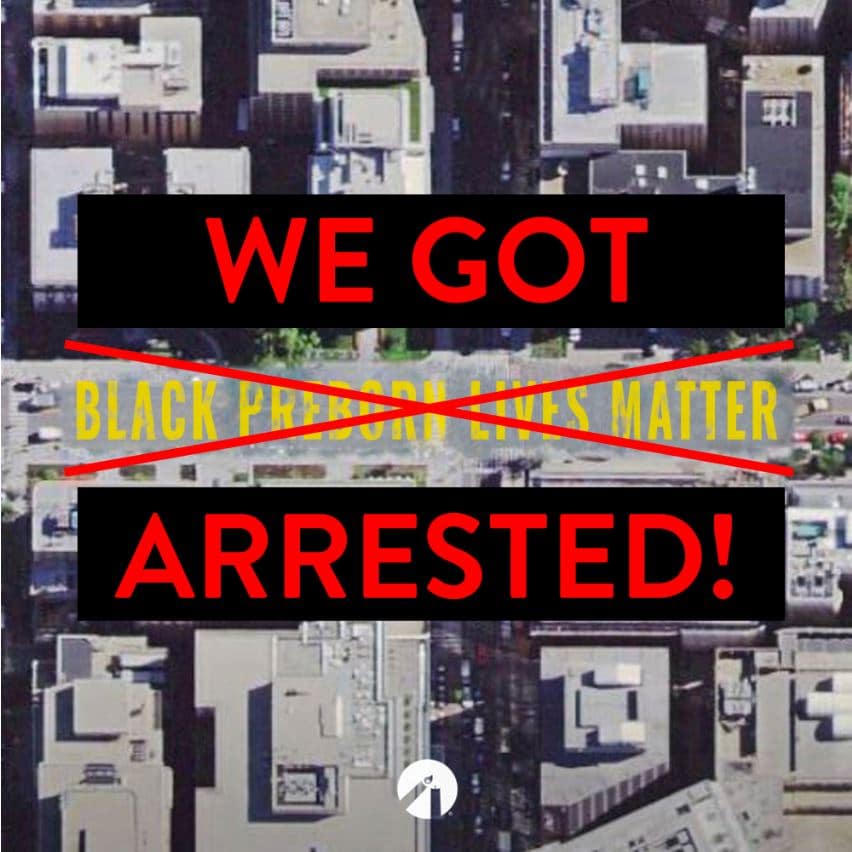 Just weeks ago D.C. Mayor Muriel Bowser painted the streets of Washington, D.C. with a powerful slogan, “BLACK LIVES MATTER,” and then allowed activists to paint, with permanent paint, additional messages like “Defund the Police.”

In doing this, she proclaimed not only what those of us in the pro-life movement genuinely believe and fight for every day in front of Planned Parenthoods and other abortion facilities across America. But she also opened up the streets of Washington, D.C. for public expression.

After being told by the Metropolitan police that the Mayor has quote “opened a Pandora’s box” by painting public streets, we arrived to SIX police cars threatening to arrest our team and students if they painted, even using the temporary paint we bought that the Police Department specifically requested. When we asked if we could at least use sidewalk chalk to chalk our anti-violence message on the streets, the police threatened to arrest us.

In fact, when a college student and Students for Life staffer knelt to sidewalk chalk instead of go through with our planned message, the D.C. police arrested them.

With these threats and arrests, D.C. Mayor Muriel Bowser has made her motives clear as she apparently only thinks that SOME Black Lives Matter and that only SOME slogans are allowed to be painted on streets.

CLICK HERE TO EMAIL THE DC. MAYOR NOW & DEMAND SHE ALLOW STUDENTS FOR LIFE TO PAINT.

Not only has she bought into the eugenic and racist lies that Planned Parenthood sells and what their political contributions guarantees that what goes on inside of Planned Parenthoods each and every day is anything but violence and racism. But she has bought into the lies that only some people have freedom of speech and expression in America, people, like her, in positions of power; people, like her, who pride themselves on their “wokeness.”

Because, the Students for Life and the Pro-Life Generation will not stop. Today, across America, Planned Parenthood will end 360 black lives. And we will no longer be silent. We will no longer politely wait for you to acknowledge our rights to free speech and expression.

The next place Mayor Bowser will see us will be in the court room. Because Students for Life will sue the city of Washington, D.C. for violating our First Amendment rights to free speech and expression today.

And then next, Mayor Bowser and Planned Parenthood will see our message on billboards in D.C. and across the nation.

To those in Congress who continue to vote to fund Planned Parenthood with more than $500 million in our taxpayer dollars each year. To those in power who believe that they can use public streets to promote for some speech but not others. To those who report to work every day to Planned Parenthood’s across the nation only to ensure that the lives of tiny human beings, of all skin colors, are torn apart and thrown away…

The Pro-Life Generation will not be silent.