Students for Life Applauds Planned Parenthood of Greater New York for Cancelling Margaret Sanger from their Building, but Why Stop There? 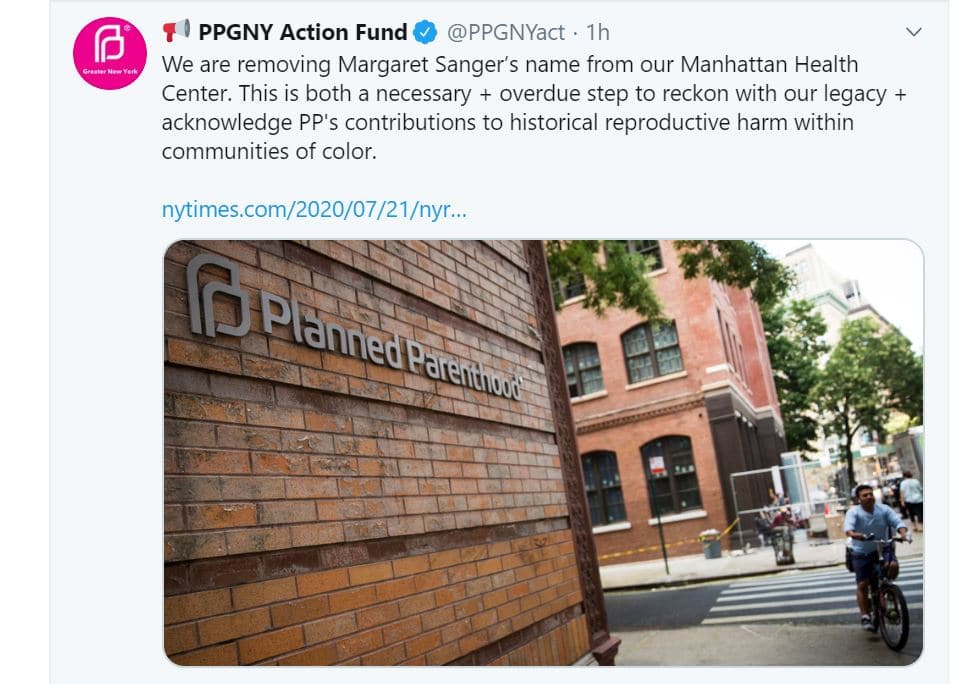 “Margaret Sanger’s racist legacy continues to be at work in America, as seen in Planned Parenthood’s business model,” said Students for Life of America’s President Kristan Hawkins. “But whether in the Smithsonian, Manhattan, or the Old South Meeting House on the Freedom Trail, Margaret Sanger’s tributes need to be taken down and stored away because her desire to ensure that black babies would not be born doesn’t deserve honor.”

WASHINGTON D.C. (07-21-2020) – Responding to news that Planned Parenthood of Greater New York will remove Margaret Sanger’s name from their abortion facility on Bleecker Street, Students for Life of America President Kristan Hawkins observed, “It’s about damn time. Margaret Sanger’s intense campaign to push contraception and the abortion mentality on minority communities to ensure that fewer black babies would be born deserves our condemnation and demands that she be removed from places of honor.

But why stop there? Students for Life of America is calling on decision makers across the country to remove her statues and honors given her racist history. In private, she was direct in saying that black babies should never be born, writing, ‘We do not want word to go out that we want to exterminate the Negro population. In addition, she appointed Lothrop Stoddard to her Board of Directors and worked closely with him, a public racist, who became the best-selling author of The Rising Tide of Color Against White World Supremacy.”

Margaret Sanger is honored in the Smithsonian’s National Portrait Gallery and at Margaret Sanger Square in Manhattan and a Margaret Sanger Statue stands in the Old South Meeting House in Boston, MA., which ironically enough is on the Freedom Trail commemorating the Revolutionary War.

Today, Students for Life of America is launching an S.O.S. – Strike out Sanger – Campaign calling on pro-life Americans  to demand the removal of Sanger’s statues and symbols wherever located.

“The American ideal is the respect and incorporate peoples of every race, creed and color,” said Hawkins. “Sanger’s hatred of minorities disqualifies her from public display, though her harmful legacy and the impact of her abortion and contraceptive advocacy should be studied.”

Students for Life of America is the nation’s largest, pro-life, youth organization. Headquartered in Fredericksburg, VA, SFLA serves more than 1,240+ groups on college and university, middle and high school, medical and law school campuses in all 50 states.