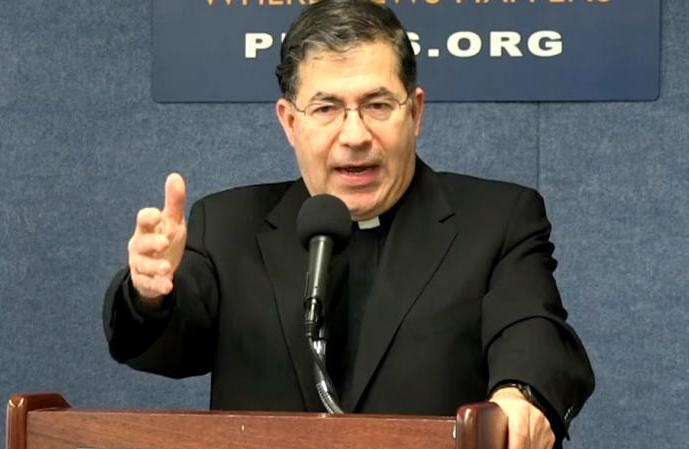 Fr. Frank Pavone, the leader of Priests for Life, took to Twitter recently to criticize the media for lying about Norma McCorvey, who was Jane Roe in the Roe v. Wade case.

The mainstream media has been running a smear campaign against pro-lifers, peddling the false idea that McCorvey never really became pro-life and in fact, was always pro-choice. The campaign took off after trailers for the new FX documentary, ‘AKA Jane Roe’ included McCorvey seeming to say she was paid to be pro-life. In fact, that’s not the most reasonable interpretation of what she said.

She stated, “I think it was a mutual thing…I took their money and they’d put me out in front of the cameras and tell me what to say. That’s what I’d say.”

Fr. Frank Pavone, a Catholic priest who knew McCorvey well shared this yesteryday: “So #abortion supporters are claiming Norma McCorvey, the Jane Roe of Roe v Wade, wasn’t sincere in her conversion. She was I was her spiritual guide for 22 years, received her into the #Catholic Church, kept regular contact, spoke w her the day she died, & conducted her funeral.”

So #abortion supporters are claiming Norma McCorvey, the Jane Roe of Roe v Wade, wasn't sincere in her conversion.
She was
I was her spiritual guide for 22 years, received her into the #Catholic Church, kept regular contact, spoke w her the day she died, & conducted her funeral.

And as the Catholic News Agency has reported, Norma McCorvey made a long and difficult journey but ended her life as a pro-life Catholic.

“In 1998, McCorvey was confirmed and entered the Catholic Church. McCorvey continued to practice Catholicism throughout her life, and received the anointing of the sick before her death.After her baptism, McCorvey was an outspoken opponent of abortion. She also spoke about struggles with substance abuse and mental health issues.”

In fact, in a sworn affidavit, Norma McCorvey stated that was tricked into being involved in the case. You can read that affidavit here.

Other pro-life leaders have criticized the FX documentary.

For example, Gregory Cox of Liberty Counsel told us, “In observing the many years of Norma McCorvey’s interactions with the pro-life community, three things were obvious: Her struggles with her inner challenges in her desire to follow Jesus, her anger toward the pro-abortion machine who used her to advance their agenda and abandoned her when she was no longer useful, and the authenticity of her commitment to the sanctity of human life. Regardless of any “deathbed” confessions, Norma’s pro-life activities were driven more by conviction than compensation. If individuals within the pro-life community used Norma to advance their own personal agenda, that’s a matter between them and their conscience.”

Jane Roe (Norma McCorvey) always spoke w/ passion about her pro-life convictions, which represented a huge & public shift from how she had been seen for so long.

The woman that I personally knew lived a painful & complicated life, but spoke directly about how she felt about it. pic.twitter.com/jUEmOLGKOf

I prayed with Norma McCorvey in front of an abortion facility for the 40 Days for Life-Dallas campaign just before she died. That and so many other activities she did with our Dallas #prolife community were unpaid. There was no doubt in our minds she was pro-life.#NormaMcCorvey

Peggie Nienaber of Faith and Liberty said as well, “Norma McCorvey lived a life that was complex full of twists and turns.  In the times I had with Norma, she often spoke of her conversion and happiness. The guilt of the Roe v. Wade Supreme Court case carried with her for many years – and rightfully so. The Pro-Life Movement did not use Norma, they respected her and supported her through her trials and were joyful of her conversion to Christ.”

Alveda King added, “Norma was my dear and cherished friend. We spent hours together. She deeply regretted having been used by the billions of dollars backers of the baby slaughtering abortion industry. She spent her latter years telling the truth about how her story was orchestrated and manipulated by the abortion lobby.”

Mark Harrington, president of Harrington noted as well, “Soon after her conversion to Christ and the pro-life view, Miss Norma stayed at our home and we conducted outreach efforts together with Operation Rescue and Flip Benham. Norma was won by love to Jesus and spent the remainder of her life attempting to reverse the very Supreme Court decision that bears her name – Jane Roe.”

Serving as President of her Students for Life group in college, Brenna is now Students for Life’s Digital Content Manager. Her work includes managing Students for Life’s website content, contributions to the blog, and other digital content as part of the mission to make abortion unthinkable.
Blog
Blogroll
college
College Students
Supporters