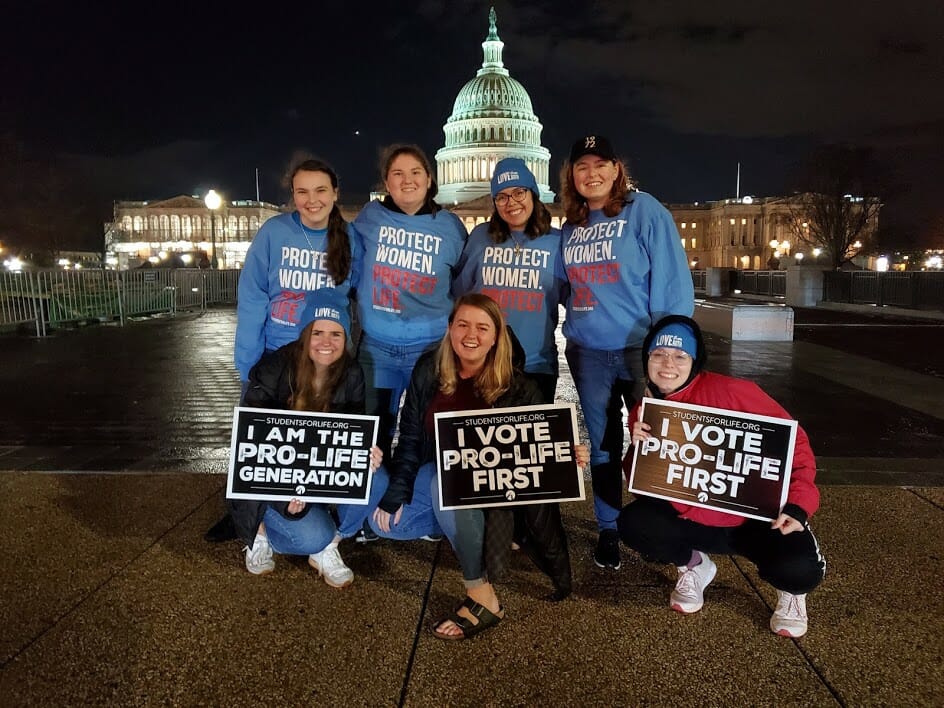 March 4th was a historic day for the pro-life movement. The hearing for June Medical Services v. Russo began at the Supreme Court of the United States (SCOTUS), and pro-life advocates rallied together to show support for a Louisiana state law designed to protect women in Louisiana by requiring abortion facilities to be held to the same health & safety standards as any other surgical facility. 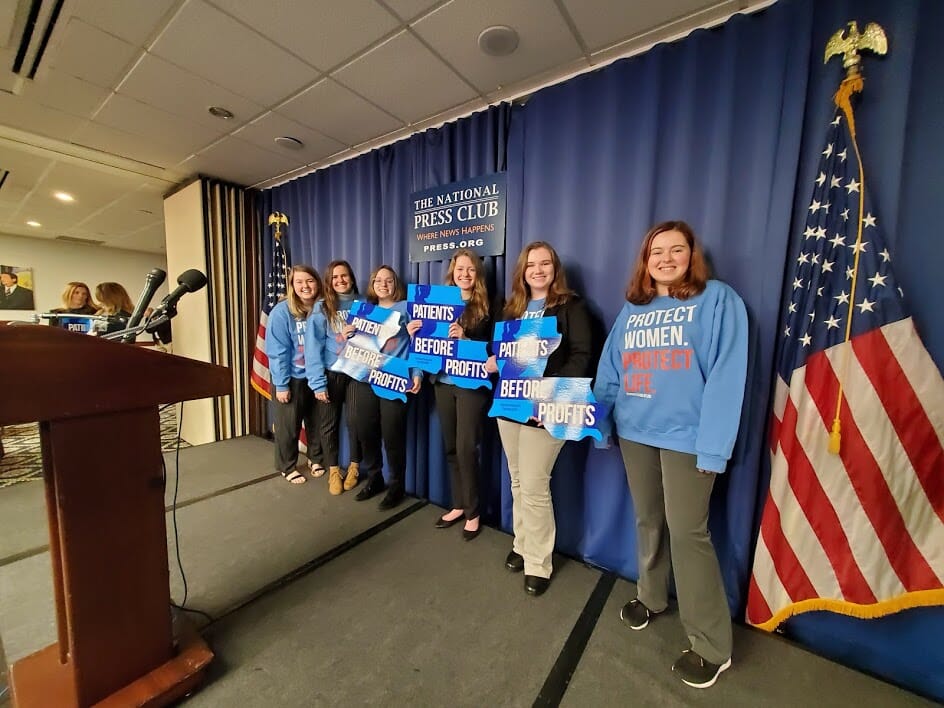 Naturally, even though this law is common sense, Planned Parenthood and NARAL rallied their troops as well… giving them nothing but slogans to shout such as “My Body, My Choice” (which held even less meaning than usual given the fact that the law is not designed to restrict abortion, but rather to protect women) and a general rule not to engage in meaningful dialogue with the opposition (us).

Our students knew the importance of this hearing, and of course, jumped into action to be a voice for vulnerable Louisiana women. Students from Liberty University, Towson University, American University, Catholic University, various local high schools, homeschools, and more joined in. Not only did they have a significant role in the rally, holding up our banner and literally blocking pro-choice activists from forcing their way into our Protect Women, Protect Life rally, but these students also spent the night at the Supreme Court to hold our spot for the rally the next day. 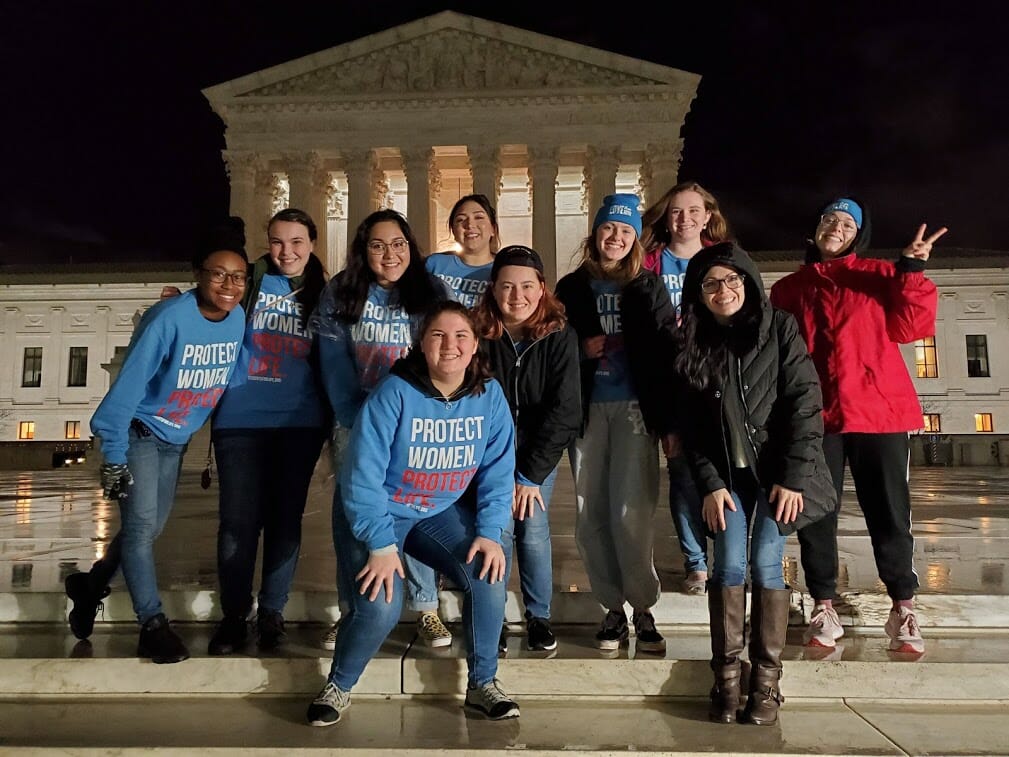 This is just a few!

Maggie Donica, President of Students for Life at Liberty University, said, “The pro-choice side says that they pro-life movement only cares about the baby, but at the Supreme Court, the Pro-Life Generation showed how much we care about the mothers who are hurt every day in Louisiana by abortionists who care more about money than the health of women. I could not stand idly by while women are being injured so I felt called to go and be a witness!”

The students attended a prayer vigil the night before and then camped out and held the space until the next morning’s rally at 8 am. Throughout the night, the students took shifts, prayed, played games, were approached by reporters, laughed, sang, and tried to engage the opposition in meaningful dialogue.

Most of the time, the abortion supporters refused to speak with us. The only engagement we had with the few of them who came out there as a response to us being there was when we were playing Christian music softly, singing along, and trying to stay awake. They reported that to security for some reason, and that was as far as they were willing to go to engage with us.

But the students didn’t mind! They kept positive and were brave and bold advocates for life!

Shannon Miller, a member of Liberty University Students for Life said, “When I heard we were camping out all night in front of the Supreme Court steps, I immediately thought about how amazing of an opportunity that is! Getting to be out on those steps from 4 PM Tuesday to 1 PM Wednesday was SO tiring but SO powerful. We got to cover the Supreme Court and our country in prayer. God is in this storm, and He is the way–maker, and I fully believe that He is moving me to be a part of this movement!” 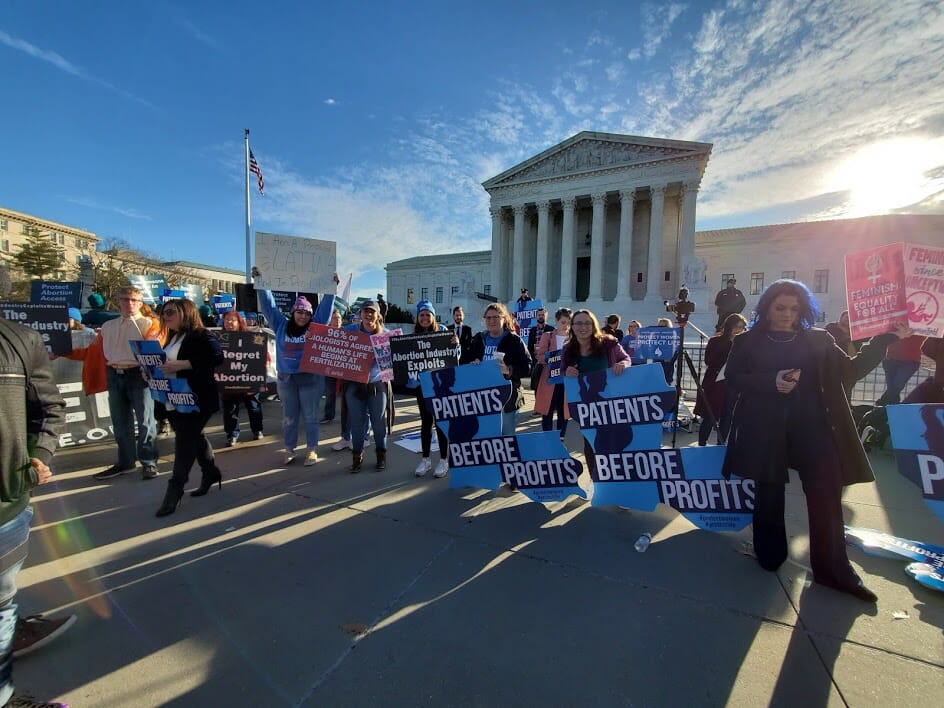 After the overnight, it was time to spring back into action and begin the rally. The Protect Women, Protect Life rally was a huge success! Students held a banner to hold our space, and hundreds of pro-lifers came to stand as witness for Louisiana’s women.  Speakers included Live Action’s Alison Centofante, Students for Life President Kristan Hawkins, Louisiana’s Senator Jackson, Former NFL player Ben Watson, and so many more pro-life organizations who came together and were represented.

On the opposing side, directly next to our rally, there were constant shouts of, “Look at those idiots over there!” various other nasty remarks, and obscenities such as, “I fu**ing love abortion”. Eventually, a member of Catholics for Choice took their stage and made the claim that 70% of Catholics believed abortion was a moral choice. Senator Chuck Schumer was also a speaker at their rally, and he decided to make threats at Supreme Court Justices Gorsuch and Kavanaugh, shouting, “You have unleashed a whirlwind and will pay the price!”

In contrast, speakers at the Protect Women, Protect Life rally spoke of the importance of loving women. Some women shared their stories of being hurt by the abortion industry, some shared a prayer, and some encouraged the crowd to keep standing for life. No threats were made, and no insults were hurled at our opposition.

Our students continued trying to engage in dialogue with the pro-abortion supporters next to our rally. But, tragically, most people would not even look us in the eye, and if they did engage, could not speak to the Supreme Court case, but rather chose to shout the usual slogans. Despite this, our students were brave, courageous, well-spoken, and willing to take on tough dialogue and stand their ground. 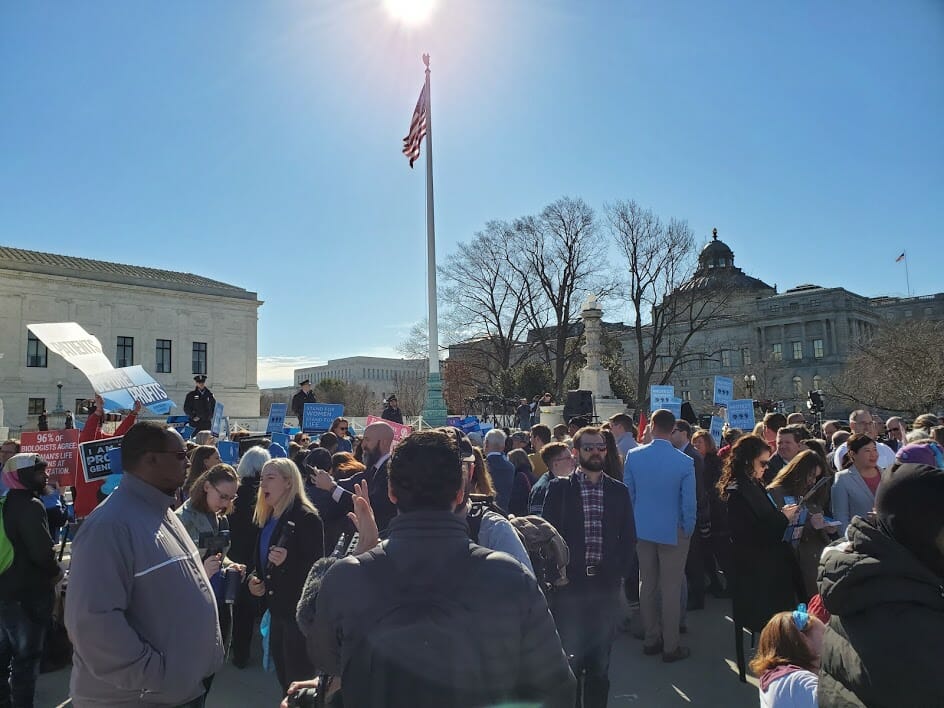 Some of the pro-choicers wore earrings that depicted babies being eaten by alligators, and others chose to harass students by calling them names and yelling in their faces at the rally. At one point, I was even approached by a pro-choicer who didn’t realize I was pro-life and she said, “I’m going to try to unplug their speakers.” I responded with, “I’m one of them. Why would you do that? We would never do that to you.” And she grumbled, called me gross, and ran away. Another pro-choicer stole one of our signs and tore it up. No matter what the other side threw our way, our students were unphased and kept up the positive energy!

A student at American University and President of their Students for Life group, Olivia Triska, explained, “When I heard there were a group of students who would be sleeping over at SCOTUS for the June Medical case and participating in the rally the morning after, I was so excited to see the pro-life movement take such a committed stand to protect women’s health. I was not surprised when the pro-choice advocates met us on the steps and were unable to have productive civil dialogue as they pushed into our rally space and stomped on our signs. Participating in the rally made clear to me that the young pro-life movement is committed to defending life-affirming legislation and protecting women from the exploitative abortion industry.”

The event was a huge moment for the pro-life movement, and I am so proud we were able to take part in such an important part of history. This is only the beginning, though! We are going to need help again in June when the case decision is set to happen. Please follow us to learn more about getting involved or email Stephanie Stone at [email protected] for updates.