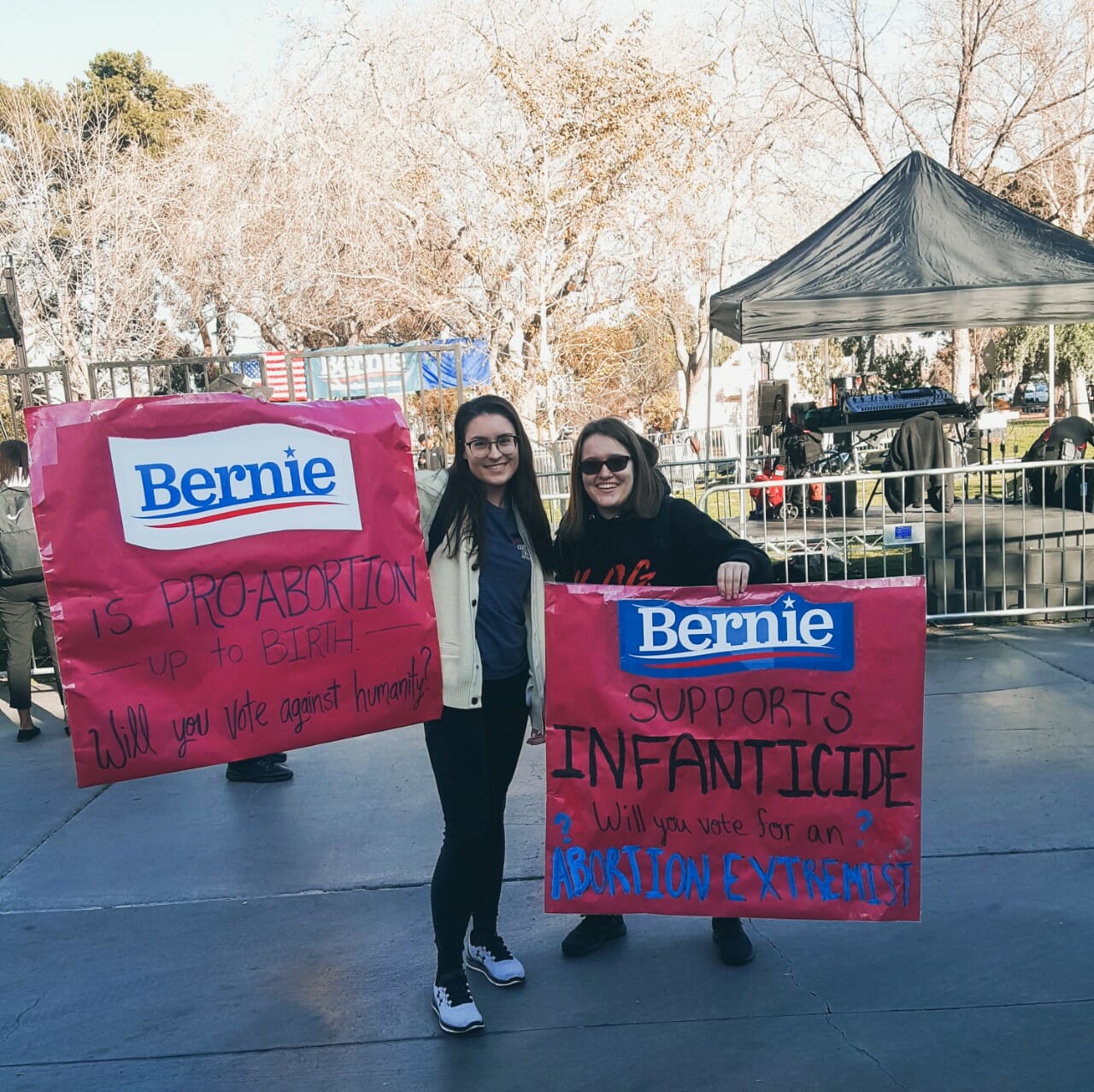 I was holding a sign that I had made earlier that day that read, “Bernie is pro-abortion up to birth. Will you vote against humanity?” I guess the truth had offended the approaching girl because her rage was deafening. She got into my face and immediately began tirading about how I was “lying” about Bernie supporting late-term abortion and then spat out condescendingly, “Have any of you ever taken a science class?” 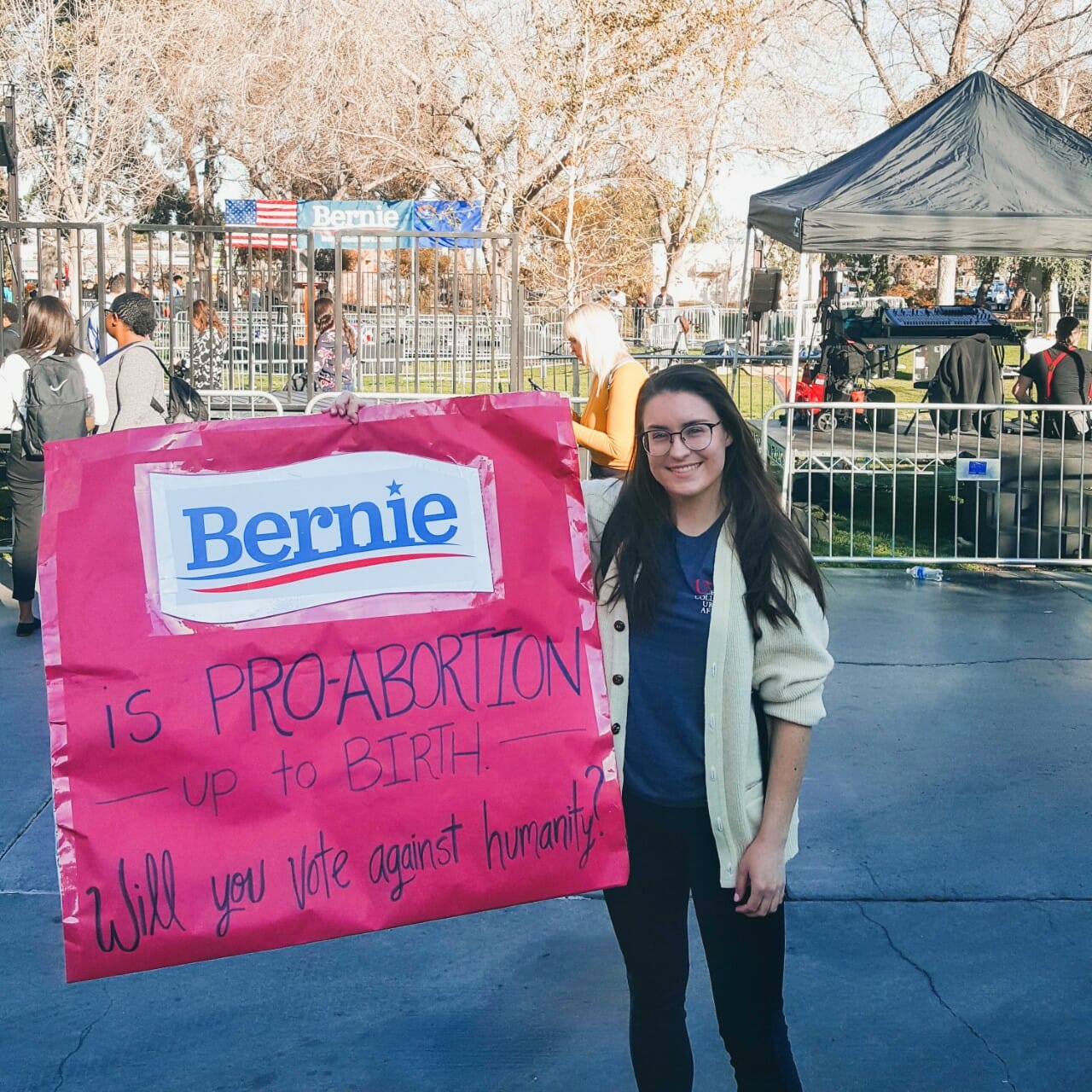 Her verbal attack was as chaotically disorganized as it was misinformed. I responded that I had indeed taken science courses, and also that I would not engage with her if she did not calm down- to which she claimed that I was ableist for assuming her verbally violent behavior was not mental-disorder-related. She kept repeating that a “fetus isn’t even a human” at max-volume, and I, in the calmest voice I could muster, asked what species it was if it wasn’t human. That really triggered her. I won’t bore you with the whole of her ballistic ranting, but let’s just say it was more expletives, insults, and scientifically-unsound word vomit than anything else.

I genuinely thought that she was either going to explode with rage from the inside out or possibly get physically violent with me. Within minutes, a small crowd had formed, and even people from a decent distance away had stopped to stare at the unfolding scene- since this girl’s shrill screaming could probably be heard from at least a mile away. At one point, a sound technician from the Bernie rally yelled to her, “Shut the *expletive* up!”

My friend and Member Coordinator of UNLV Rebels for Life, Faith Nault, later made a statement about the incident and explained, “I felt unsure of what would happen because [the girl’s] attitude was unpredictable. It made me so tense that even with Angelique telling me to film, in my mind it was just saying to protect and to not add to the already escalating situation. Even bystanders were getting annoyed, which added to the girl’s aggression.”

The girl eventually left, most likely because I was not giving her what she wanted- a fight. I did not raise my voice, I did not get emotional like she was, and I did not back down. Amazingly, multiple people came up to us after the whole ordeal and commended us for our calm demeanor in the face of such verbal assault. Those people included Bernie supporters. Which leads me to point out that not all of the conversations from the day were as intense, unproductive, and one-sided as the screaming girl. I spoke with several Bernie supporters, including during media interviews, who were truly unaware of Bernie’s extreme pro-abortion stance and were at least somewhat open to a discussion of the facts.

Then Pete Buttigieg Came Along 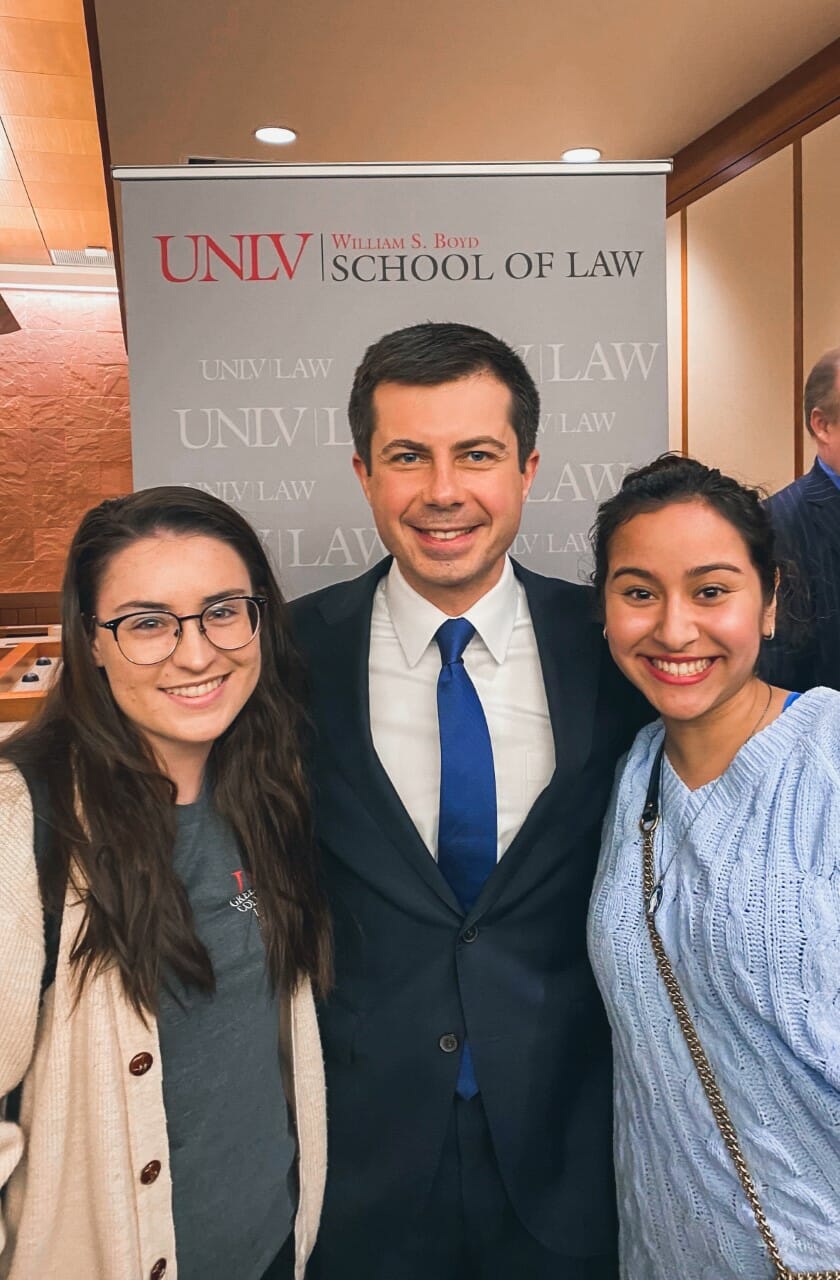 But the day of activism wasn’t over yet. I got a message from another one of my group officers telling me that Pete Buttigieg was on our UNLV campus and that we should crash his rally. I grabbed our group’s megaphone and the “We Are Pro-Life Feminists. Do you believe in equality?” sign that I made for our #takebackpink tabling day, and hurried across campus to meet up with my group’s secretary, Anali Macias, who was already at Pete’s rally.

Immediately following his talk, we grabbed a quick photo with Mayor Pete and Anali told him before we were ushered away, “It’s too bad you’re not pro-life.” Anali later told me, “I’m glad I was able to go and let him know where we stand on the issue of life.” We then stood right outside the doors of his rally with our sign and talked to a few people who streamed out. I did an interview with Breitbart, but it wasn’t published… which was fine, because we ended up on Breitbart the next day during our protest of the Democratic Debate! 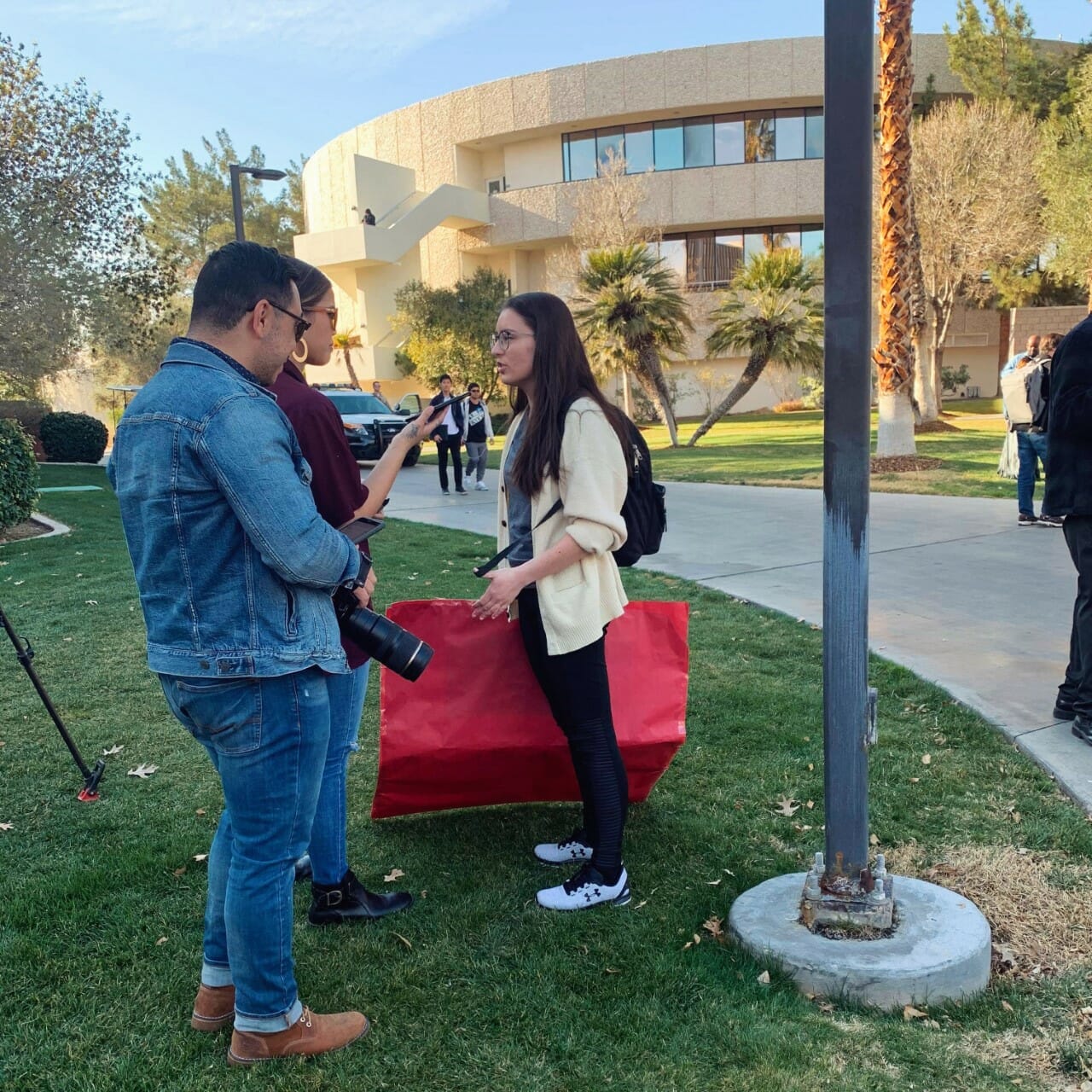 The protest of the Democratic Debate on Las Vegas Blvd. was right outside of the Paris Hotel, and directly across the driveway from a collection of Joe Biden supporters. My group, UNLV Rebels for Life, alongside Pro-Life San Francisco and New Wave Feminists, chanted slogans like “Pro-life for the Whole Life” and “End Abortion Extremism.”  As the sun began to set, the never-ending stream of Vegas tourists continued to witness the truth about Democratic candidates who claim to stand for the underrepresented and disenfranchised while advocating for the systematic destruction of human life through all nine months in the womb. 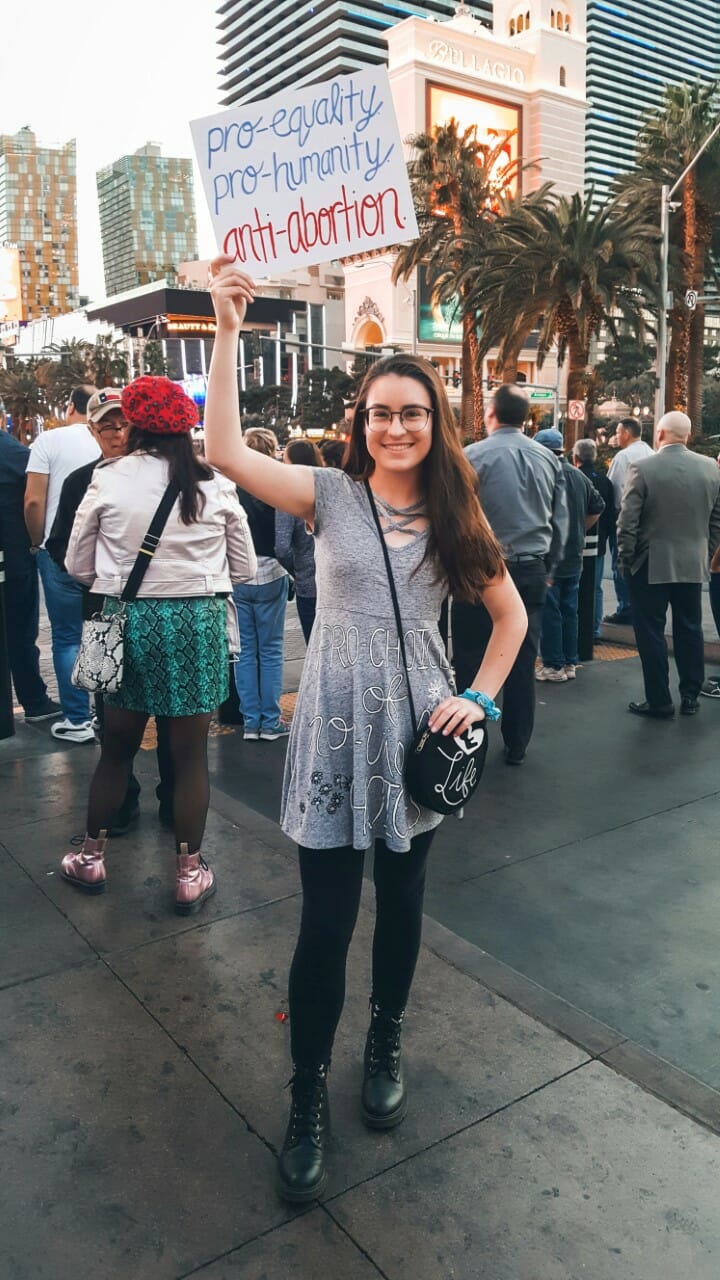 We protested for the ones who cannot protest. We chanted for ones without a voice. After calling it a night, Anali and I headed to the front doors of the Paris Hotel so we could get back to my car in the connected parking garage. A security officer told us that we couldn’t take our signs or megaphone through the casino, due to the private event (and of course, on the off-chance that we were crazy protestors who would cause a scene. Flashbacks to the Bernie supporter girl the day before, anyone?)

So to really finish off these two days of activism strong, we had two security guards assigned to escort us through the casino and through the crowds of Democratic Debate goers. I held my sign out the whole time. These past two days have been a whirlwind of rapid response to say the least, and I hope that our presence as pro-life student activists changed some minds, or at the very least, planted some seeds. The goal is to inform voters, specifically those with their sights set on a Democratic candidate, of the extreme pro-abortion views that their top picks have. The pro-life issue is a human issue- an issue for everyone: Republican, Democrat, born, and preborn.

Contributed by Angelique Clark, Student Leader of UNLV Rebels for Life and Founder of the Pro-Life Clothing Line LifeDress.

Serving as President of her Students for Life group in college, Brenna is now Students for Life’s Digital Content Manager. Her work includes managing Students for Life’s website content, contributions to the blog, and other digital content as part of the mission to make abortion unthinkable.
Blog
Blogroll
college
Featured
high school
In the News
leadership
Med & Law
Supporters