Student with Spina Bifida Marches for the Preborn with Disabilities 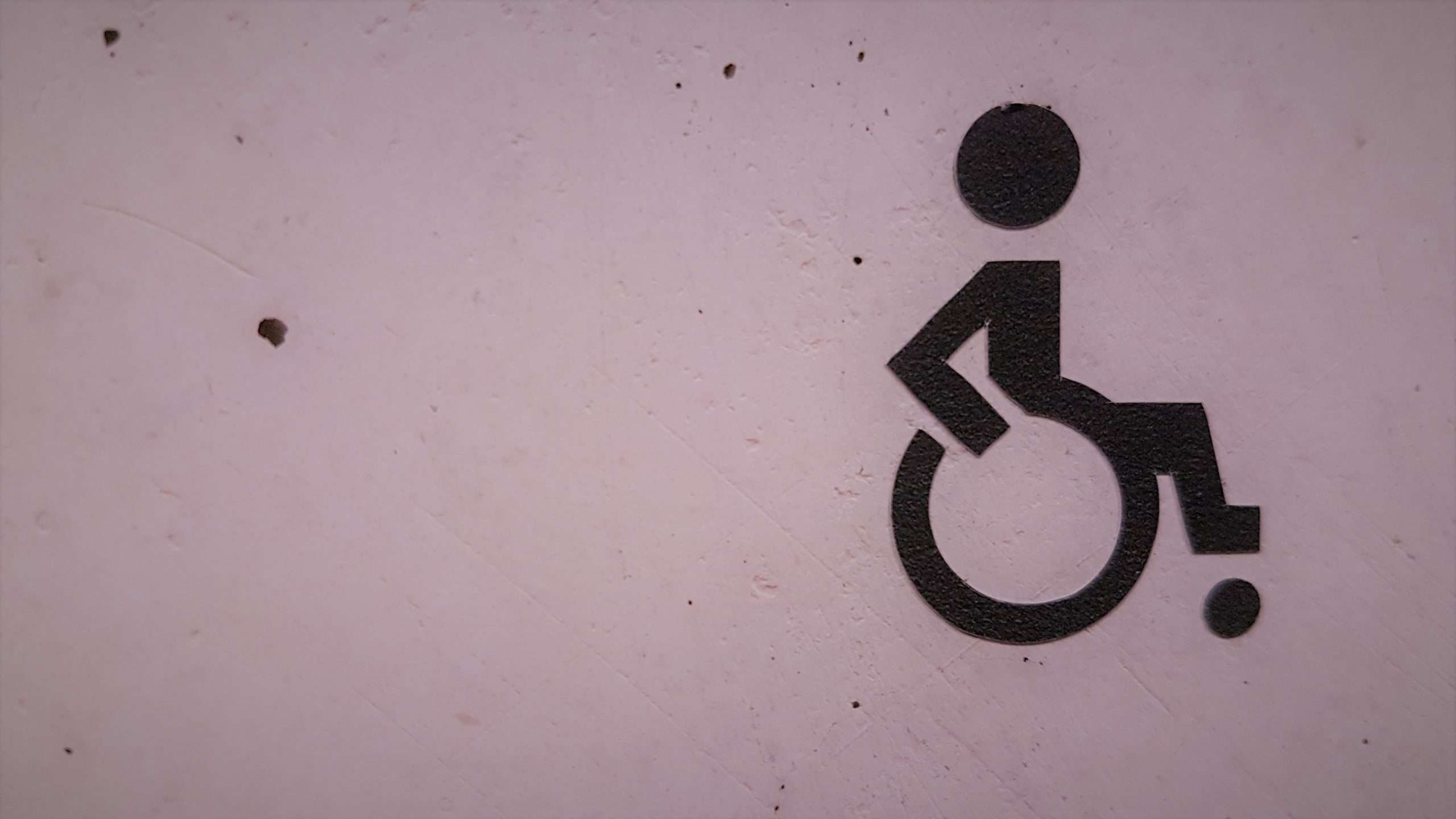 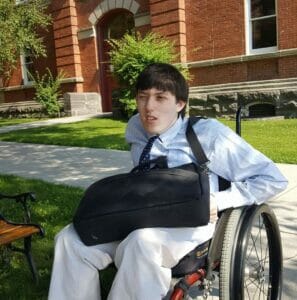 My name is Greg Lobo and I am a senior history major at Seton Hall University. I am an active member of our pro-life group, Pirates For Life. I just wanted to tell you my story of how I got involved in pro-life activism and what an integral part of my life it has been. I love our pro-life movement, which has given me so much (including, in some ways, my life itself).

I was born with spina bifida, which, for those who are unaware, is a neural tube defect that has affected use of the lower half of my body. I use a wheelchair because I cannot walk. This condition necessitated an emergency surgery at birth, and many other subsequent surgeries. The cycle of surgery after surgery growing up was an extremely hard thing. To make matters worse, all of my friends growing up played sports. While they regaled me with their stories of scoring touchdowns in the football games, I sat home, thinking about it, and wishing I could do something to play with my friends.

When I was young, I felt left out, hurt, and cheated by God. The irony of this is that I didn’t have a “bad childhood”. When it was good it was great, but when it was bad it was really bad. Obviously, all of these feelings had an effect on my faith life. When I was young, I felt that God had abandoned me to a life of surgery and watching on the sidelines, and culture had reinforced my negative thinking, telling me that disability is an extremely negative thing that takes away most good things in someone’s life.

Whenever I expressed my concerns about my life, my mother would tell me something like, “God has a special plan for you”. We even had a book along those lines called “The Crippled Lamb”. It was my favorite book growing up even though I did not believe the message. Or, at the very least, the concept was too abstract for me at that time. I did not know that God had a plan for everyone because I had not seen what His plan for me was. I had a lot of doubt about what my life was and what my life’s purpose was. It was not until that changed that I was able to receive God more fully into my own life. 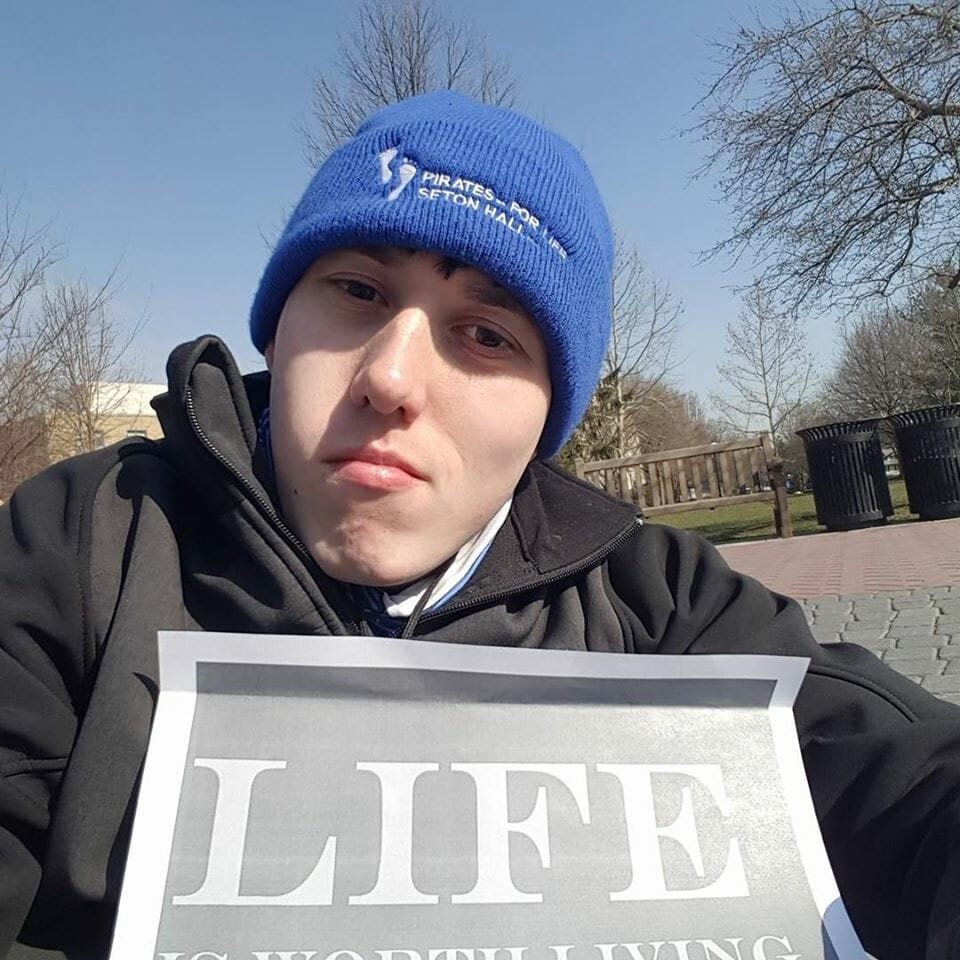 When I was in high school, I participated in theatre. I had stopped openly doubting my life and its purpose; I just was not thinking about it at all. Theatre was a place for me to let go. When I was in high school, I learned that my disability was not a negative; it was just one of my characteristics, the way people have different colored hair or eyes . This erased the major doubts in my life. This was a good development, but it still was not the ideal.

One day during high school, my life changed. A friend from church sent me an invitation to like the Live Action Facebook page. I was scrolling through the page and saw that Live Action had posted an article about an Icelandic woman who had Down Syndrome who made a photo series of other people with Down Syndrome. It said in the article that if a woman gets a positive prenatal test for Down Syndrome in Iceland, she chooses abortion 100% of the time.

This shocked me. I had always been what one might consider “pro-life”. I was born into a Catholic family. We rarely discussed the issue, but when we did, it was understood that this was something bad. It was not, however, an issue that I had thought about greatly. When I found out that the world was getting rid of individuals with Down Syndrome at that high a rate, something clicked inside of me. I could not sit by and watch this happen.

When I got to college, I went to the table of the pro-life group at the involvement fair, but I did not really go to any of their meetings freshman year. I went to the National Pro-Life March in Washington D.C. with my parish, but I did not really get involved other than that. But in my second semester, I got more involved. I started going to meetings and doing the other events. I would even talk to my mother about this. 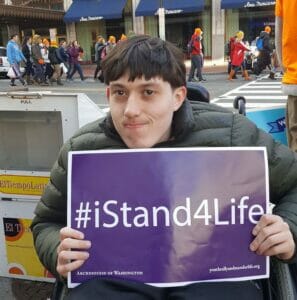 One night, I heard one sentence from my mother that would make this fight personal. “You know, some people wanted me to abort you,” she said. She later told me the full story. When my parents went in for the tests and they found out about my condition, they had to go in for extra tests. With spina bifida comes hydrocephalus (fluid on the brain), which is very bad for the brain and needs to be monitored in the womb. Sure enough, I have a shunt to manage that. Anyway, my parents went in for the hydrocephalus test, and the radiologist, who wasn’t even supposed to be in the room at the time, rudely informed my parents that “[the hospital] already diagnosed this, so why haven’t [my parents] taken care of it?”

Considering that the fetal spina bifida surgery option was in its infancy and they had not been told about it, the implication was quite clear. This changed everything. Fighting for the right to life for all was no longer an abstraction to me. The culture of death had actually tried to kill me. Now it was personal.

This was my purpose. The reason God created me the way I am is so that I could have my story and I could share it. With this story, I am in a unique position to fight for the right to life for everyone because I know how some people are devalued by others because of their genetic code. It’s a deep and personal offense to me that some people are quite literally thrown in the garbage because of who they are.

I am no longer doubting my purpose. God put me here to make sure that no one is ever told in that way to “take care of it” ever again. Doubts can happen to anyone, but everyone would do well to remember that they are divinely endowed with a specifically chosen purpose from God.