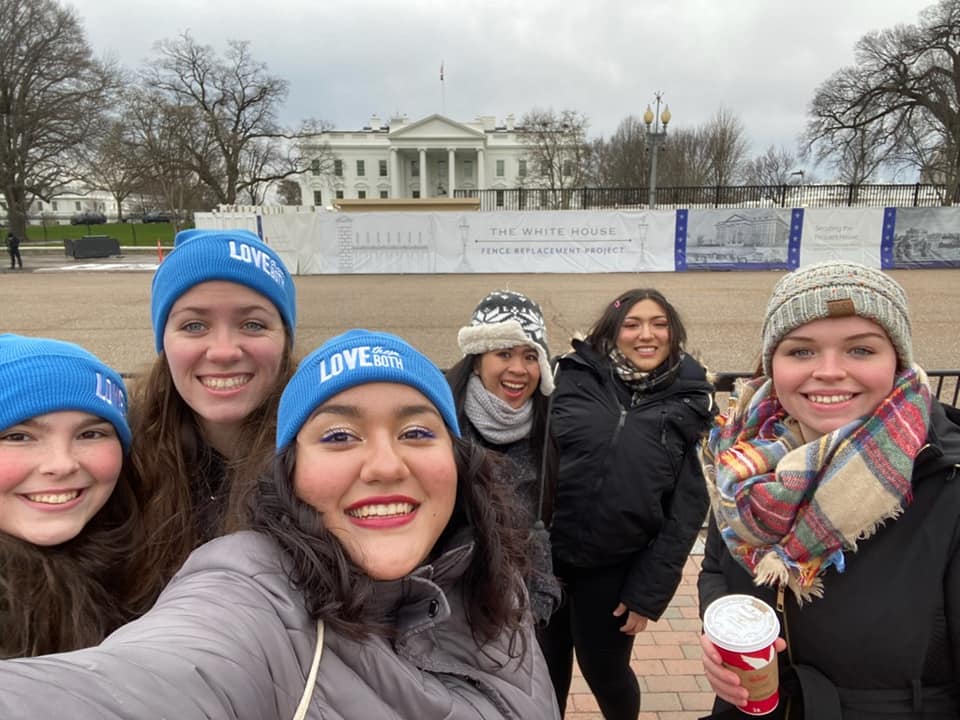 “While we might not have been invited, the Pro-Life Generation came out anyway, crashing at the head of the line for all women – born and pre-born. The Women’s March claims to stand for ‘ending violence’ yet supports the violence of abortion and ignores the convictions of more than half of all women who believe that women in the womb are important, too,” said SFLA’s Kristan Hawkins.

WASHINGTON D.C. (01-18-2020): Students for Life of America crashed the Women’s March Saturday in the nation’s capital, ignoring the lack of a formal invite to stand for all women. Students for Life of America President Kristan Hawkins noted that the SFLA team was there to round out the Women’s March messaging. “The Women’s March claims to stand for ‘ending violence’ yet supports the violence of abortion and ignores the convictions of more than half of all women who believe that women in the womb are important, too,” said Hawkins.

Students for Life of America Executive Vice President Tina Whittington represented SFLA at today’s event and observed: “The Women’s March is a dying organization with mixed messages and no clarion call. Their radical leftist message shows just how out of touch they are with the rest of the country. While today’s event showcased a mixed bag of issues, the majority of the marchers shared their support of a radical abortion agenda, with many saying that they were fine with abortion through all nine months of pregnancy.

“Our students braved the cold to make sure that the one point of view not represented at the March would be heard – a voice speaking up for the 1,500 baby girls who are lost each day to the violence of abortion. If we want equal rights for women, we cannot forget the most vulnerable, those still in the womb.”

Hawkins noted that many women share support for the preborn. “As Gallup reports, more than half of women consider themselves pro-life compared to 46 percent of men. And we know that that for those who make abortion the issue that decides their vote, the pro-life position provides more passion and votes. Yet, at the Women’s March and in much of mainstream media, women like myself are ignored and our voices too often silenced,” she said.

This weekend, SFLA team members marched with Students for Life leaders and spoke at in a number of events on Saturday across the country.

Media interested in the historic Pro-Life Summit on Saturday after Friday’s National Pro-Life March, can register at: https://prolifesummit.com/media/

For interviews and analysis, contact Kristi Hamrick at [email protected].

Students for Life of America is the nation’s largest, pro-life, youth organization. Headquartered in Fredericksburg, VA, SFLA serves more than 1200 groups on college, universities, high school and middle school campuses in all 50 states.