So, What’s Going on with California Campus Abortions?

There are a few things all pro-lifers should know about the campus abortion mandate that the California abortion lobby, for over a year now, has been toying with. To make a VERY long story much shorter, they want to mandate public universities to dispense abortion drugs.

No, not birth control and Plan B. Though those can cause abortions, too.

They want to force institutions of higher education to hand out RU-486, the two-pill abortion cocktail colloquially known as “toilet bowl abortion.” They want to force university staff to be complicit. And they want student fees to help cover the cost. Oh, and their new governor is super on board with it.

And in case you’re rolling your eyes thinking this is only a California problem, think again. The bill sponsors are very clear that they want to start in the Sunshine state and then roll this out to campuses nationwide.

Here’s a little timeline of events:

The first pill, Mifepristone, commits the actual fetal killing by blocking necessary sustenance from reaching the child, who is typically 10 weeks or younger. The second pill taken later, Misoprostol, induces intense artificial labor that expels all of the “contents.” Mothers are instructed to clear their schedules and go sit on a toilet for an uncertain length of time while enduring an unpredictable amount of pain.  Click here for further information.

Planned Parenthood and other abortion vendors are jumping on the RU-486 train, making apps and working towards selling the drugs online. Not to mention, the abortion industry at large is advocating for the removal of FDA regulation of it. Because they’re really concerned about women’s health and wouldn’t want the FDA getting in the way of that.

What About Conscience Rights?

The people working at these educational institutions presumably did not have the end goal of entering the abortion industry. So, for school employees who don’t want to work at an abortion facility school, they’ll have two choices: do it anyway or leave. Thanks to the abortion lobby, these are not good choices, and these schools will be driving out countless good employees. All because of their complete and utter obsession with abortion.

And eventually, the measure will force students into the abortion business as well, as their school fees are used to pay for the student health centers. Students taking out loans to cover costs will know they are also paying for abortions, whether they want to or not. Lawsuits are definitely going to add to the cost of that kind of forced participation with abortion.

What’s This Issue with Student Fees?

The supporters of SB 24 keep claiming that this abortion mandate won’t be expensive, though it’s been proving that they’re taking and raising student fees to help pay for it. As mentioned previously, the California Department of Finance has denounced this as a bad venture, completely separate from the morality. So… not only are they wanting to force schools to become abortion facilities, but it doesn’t make good money sense, either.

Why Should We Care?

It probably goes without saying that we care about all preborn abortion victims, no matter what state they live in. We care for those young mothers who, if the bill passes, will suffer alone in dorm bathrooms, possibly doomed to subsequent health problems or infertility. And we should care because California is the abortion lobby’s testing ground, where they have plenty of room to roam. Other pro-abortion states use them as an example. So you can bet that whatever they successfully do, other states are going to emulate. 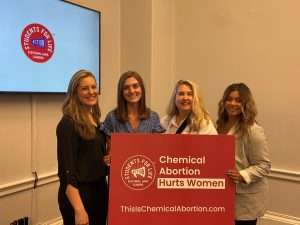