Pro-abortion college professor Nicholas Money may be a professor in the biology department and an expert on mushrooms at Miami University, but he doesn’t seem like a fun guy to me.

In a recently published Letter to the Editor in the Miami University-Oxford student newspaper, ahead of a speech there on Thursday, April 25th by Kristan Hawkins, president of Students for Life of America, Money makes several false claims. Of course, it’s one thing for a student who is passionate about an issue to be sloppy and make mistakes. It’s another issue when someone who is tasked with helping students discover the truth and purse knowledge makes false claims that 5 minutes fo fact-checking could have caught.

First, Money claims, “By naming her campus peregrinations, “The Lies Feminists Tell,” Kristan Hawkins, president of Students for Life of America, positions herself as an opponent of everyone who considers themselves supportive of the rights of women to self-determination.” Actually, that’s not true at all. In fact, almost all of Kristan’s speech is aimed at discussing the way mainstream, pro-abortion feminism is unsupportive of the rights of women, by telling them that a baby will ruin their life or that they need birth control in order to succeed.

Second, Money claims Hawkins sent, “targeted emails to faculty that she has identified as “feminists,” when that is not true either. Hawkins did not send e-mails to feminist faculty members at the university. The Students for Life club did send out invites to professors asking them to share the invite to the speaker with their students, which seems like a relatively common thing to do. The group notes that some professors said they would share it, some sent back nasty e-mails, and some just ignored it. The university media relations department recommended e-mailing the student newspaper for a correction.

Finally, Money says that her talk is “founded on her religious fundamentalism.” While Hawkins is a convert to Catholicism, and will discuss praying outside abortion facilities on occasion as part of her larger narrative of her involvement in the pro-life movement, most of her talk uses secular based arguments and references medical journals or mainstream media news sources. Her speeches to student groups rarely reference religious arguments, and instead rely generally on primary source material, such as the writings of early and modern-day feminists.

The premise of Money’s letter to the editor is to tell the school community not to attend Hawkins’ talk. Of course, Money might benefit from listening to the talk at least once, since he apparently didn’t listen to it before writing his ill-informed and factually inaccurate letter to the editor. 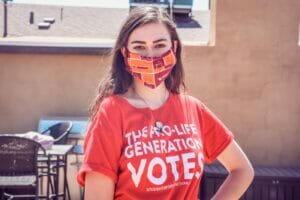