Blog about Holocaust martyr is ‘too religious’, claims Catholic speaker is anti-LGBT

The University of Idaho is in Moscow, Idaho, but the authoritarian mindset of the Women’s Center director fits better with Moscow, USSR. Lysa Salsbury, the director of the Women’s Center, a pro-abortion, taxpayer-funded entity at the University of Idaho, recently banned a Students for Life leader, Victoria Diloné, from writing about eugenics and hormonal birth control.

She also banned her from writing about pro-life pregnancy resource centers and the spectrum of diversity in the pro-life movement (such as Secular Pro-Life, Feminists for Life, and the Pro-Life Alliance of Gays and Lesbians). Salsbury also criticized Diloné for saying gender is determined by chromosomes and for promoting a Theology of the Body event in a blog post about Catholic saint and Holocaust martyr, Edith Stein (the original line at the end of the first paragraph said, “But besides confirming my gender with my XX chromosomes.”).

In the comments section of the document, the student editor wrote, “Leave this part out. Not all women have XX chromosomes, and not all men have XY. Gender also doesn’t involve chromosomes” to which Salsbury added, “I agree. Chromosomes have nothing to do with gender.”

At the end of the original blog post, where Dilone had advertised for the event with Bill Donaghy, a speaker on Theology of the Body, Salsbury wrote, “Please delete this. This individual has views and belongs to an organization that does not support the LGBTQIA community. We are not advertising this event on the blog.”

The Women’s Center at University of Idaho says it wants to “empower all individuals in building an inclusive and compassionate society.” But inclusive only means pro-abortion and leftist, since Salsbury will now be monitoring, censoring, and rewriting the remaining posts Victoria  Diloné submits to complete her internship with the center.

Recently, Diloné posted a blog on the website, after having it approved by a student editor for the blog, about the connection between eugenics and birth control. Soon after posting it, Salsbury, the women’s center director, e-mailed her saying the blog would be taken down. In the e-mail, Salsbury wrote that while the Center tries “very hard to allow the writers’ voices and opinions to be expressed freely and without censorship, feminism is the grounding philosophy undergirding the topics we allow on the blog, and the lens through which we examine the issues that bloggers write about. On more than one occasion, your personal views have been in direct conflict with one of the fundamental principles and tenets of feminism—that of choice. Your article is not only not congruent with the Women’s Center’s views on the topic, it directly challenges them. As such, we cannot publish it. I’m sorry.”

Salsbury added, “I will be reading your two remaining drafts and approving their publication (or not) on the blog.”

Jodi Walker, a spokeswoman for the university, told Students for Life in response to the incident that, “The University of Idaho Women’s Center bloggers are interns under the supervision of Lysa Salsbury and receive academic credit for their work. All topics must be approved by Lysa prior to publication – and are subject to revision, rejection or removal from the site at any point. Topics should elicit conversation and independent thinking but should not contain misinformation, strong bias or be based primarily on opinion. Blogs on this site must be congruent with the Women’s Center’s mission and values (link) and not be offensive to the readership.”

Walker did not return a request for clarification on what misinformation was present in the blog.

What’s interesting is that Salsbury herself actually encouraged Victoria to apply. Victoria told Students for Life that she had found out about the position for a blog writer through a multicultural club on campus, but when she found out the Center was strongly pro-choice and liberal feminist, she stopped her application. Victoria said that Salsbury herself reached out and encouraged her to finish her application and hired her to write for the blog. This position also counts for a journalism credit at the university.

Diloné said, “When I applied to the Center, I was upfront that I was active in the Students for Life group, and no one raised an issue then. It’s unfortunate that the Women’s Center has decided that feminism means we can’t debate issues like birth control or how to best help women. I will continue to share my beliefs and won’t be intimidated.”

Nichole Bentz, Pacific Northwest Regional Coordinator for Students for Life added, “Victoria is a great leader and I am proud of her for not backing down and for proudly sharing her beliefs. It’s a sad reflection on feminism that it now means holding one specific view for what is best for women, instead of opening it up for discussion.” 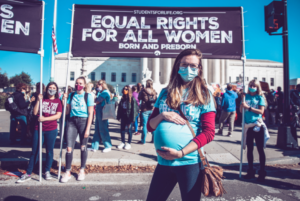 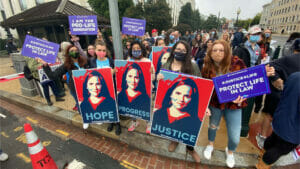