The 2020 March for Life is a Wrap! Watch the Entire Timelapse Video…

The 2020 March for Life® in Washington D.C. is a wrap! Just so you can get an idea of how BIG the event is, we made sure to capture our traditional time lapse from a nearby rooftop: This March is the largest annual social demonstration in the entire world. No other cause, in no other country, brings together such a massive group of people on a yearly basis. Every pro-life organization nationwide, despite our little differences in how we like to go about our mission, comes together for this one day – to protest Roe v. Wade and let our legislators

Vandals At University of Nebraska-Omaha

Aaron Borcyk is a student at the University of Nebraska at Omaha. He is on the leadership board of a strong pro-life group that hosts a variety of great events each semester and has made a significant impact on their campus. As a large public university, UNO should be accustomed to serving as a haven for idea exchange and dialogue.

If only abortion advocates didn’t feel compelled to destroy our stuff.

Aaron and his pro-life group decided to set up a harmless pro-life display from September 23rd to the 27th.They set up 3,000 little white flags and 4 signs explaining that “Each flag equals 1 heart stopped by abortion each day in the us. 3,000 will occur today.” So far, so good, right? It’s simple, to the point, and altogether peaceful. But, of course, we can’t have nice things… thanks to fellow students who think we shouldn’t be allowed to talk.

The group begins their day by finding that two of their signs have had pro-abortion messages written on them. Rude? Yes. Annoying? Absolutely. But the group took it in stride, touching up the signs and covering the messages. That night, one of the signs is stolen. If you’ve seen our map of campus vandalisms, you are probably unfazed by this information – maybe you’re even pleasantly surprised that it was only one sign, which is downright polite by pro-abortion vandal standards. The group reported the theft to Public Safety.

And the saga continues.

The remaining three signs are stolen. After all, why contact the group to have a conversation about differences in ideology when you could just vandalize their possessions and slink off into the night? At this point, our pro-life students are sharing the same frustrations that victims of pro-life vandalizations across the country have been feeling for, well, too long. Why aren’t pro-life groups allowed the same free speech rights as any other organization? Where’s the outrage from the administration, who supposedly values free speech? And when are they going to come up with a pro-life display that’s immune to pro-abortion hatred? (That thing would fly off the shelves).

The group re-makes their four signs and replaces the stolen ones. That’s when Public Safety called up our friend Aaron and informed him that security cameras had caught the thief stumping across campus with their signs and throwing them in the trash. Public Safety Officers directed the group to the trash cans where they could retrieve their signs, but not before members had already created the replacements. So, joke’s on the vandal – his influence effectively doubled the amount of signs. The fresh signs also had a new addition: “This area is under video surveillance. Stealing or vandalizing flags/signs is a crime”. Oddly enough, they stayed put after that.

Signs in protest of the display appear on a nearby fence, another one of the display signs is written on, and (instead of stealing), a guy takes it upon himself to “correct” the pro-life group by adding his own facts.

Check out the video the group captured of the lone individual casually strolling around placing rude, misinformed, and almost illegible posters in front of the group’s signs:

Says Aaron of the week’s events:

“We put a lot of time and effort into making a professional-looking, meaningful, and powerful display to put things into perspective. Each of us spent hours babysitting the display in the hope of deterring vandals only to have the display dismantled under cover of night. However, we weren’t deterred, and we had new signs up only hours later. It was a week FULL of rapid response.”

The SFLA Regional Coordinator in this area, David Cordaro, shared similar sentiments as he helped the group navigate their course of action. “The pro-abortion students said it themselves: this flag display is peaceful activism,” said David. “There is no excuse for the aggressive behavior directed towards this Students for Life group and their property. We are proud of how our students handled the situation and hope the school takes steps to protect the free speech rights of its students.” So what did we learn? If you’re a pro-abortion individual, it’s much easier to aggressively impose your message on the property of your opposition than do your own display. Oh wait, that’s not the lesson… If you’re a pro-life group that faces discrimination, keep on keeping on. You have every right to share your message with your peers, and pro-abortion haters are just making themselves look bad and intolerant when they mess with your stuff.

If you do a campus display and have something similar happen, use it to help the pro-life movement! Seeing your steadfastness in the face of opposition inspires others to be brave as well. Take pictures and video as much as you can, report criminal activity to the appropriate authorities, and if you want, let us know the details so we can share your story with other groups across the country. We are the Pro-Life Generation! 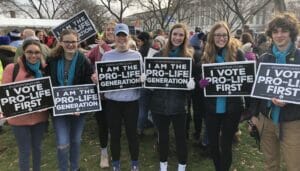 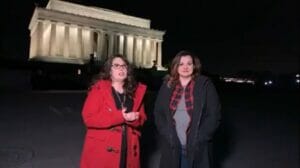