“Ireland will now join that sad community of nations who throw away irreplaceable human beings through abortion on demand,” said Students for Life of America President Kristan Hawkins.

WASHINGTON D.C./(Ireland) (05-25-18) – With exit polling indicating that the efforts to defend Amendment 8, Ireland’s constitutional protections for women and preborn infants, Students for Life of America President Kristan Hawkins said, “Ireland will now join that sad community of nations who throw away irreplaceable human beings through abortion on demand. Clearly the abortion industry and their political and cultural allies put preborn life in the crosshairs, working to push this tragic conclusion to all efforts to protect both mother and preborn child. Still, it’s a tragedy that the Irish people did not learn from our mistakes and have failed to provide pro-life protections in the law. As a result of Roe v. Wade and Doe v. Bolton, we in the U.S. mourn more than 60 millionlives lost and horrific consequences for the women who endured the lies and impact of abortion. Ireland will not face a loss they can’t calculate.”

In advance of the Amendment 8 vote to protect pro-life protections in Irish law, Students for Life of America team members joined those leading the 6thdefenseof Ireland’s women and pre-born infants, to support their efforts to love them both. “Considering that the U.S. based Center for Reproductive Rightskicked off this current attack of Ireland’s pro-life protections with their lawsuit at the United Nations, it’s only right that women from the United States traveled to stand with the pro-life community of Ireland, who were again forced to prove that they care about women, born and preborn,” said Hawkins.

“I personally know the pain of abortion and how something sold to you as a simple solution actually becomes a life-long regret,” said Bowlin. “In the United States, abortion advocates twisted a so-called ‘health exception’ to make basically every abortion, at all stages, legal in the country. Ireland is on that same path, to twist healthcare into a justification for ending life.”

Recently, Irish psychiatrists wrote a letter, discussed in the Irish Times, arguing that the pro-abortion laws that those opposed to Amendment 8 are pushing would twist the real purpose and professional ethics of true healthcare providers. Abortion advocates want to use “mental health” as a reason for abortion, and want the law to allow for mental health abortions after 12 weeks of pregnancy. The psychiatrists wrote: “We do not want to see spurious appeals to ‘mental health’ being used to justify post-12 week abortions …To use ‘health’ as a justification for abortion, when the vast majority of abortions do not take place on any kind of health ground, inverts the true purpose of medicine and doctors who value their calling should have nothing to do with this.”

Students for Life of America is the nation’s largest pro-life youth organization. Headquartered in Fredericksburg, VA, Students for Life has more than 1,200 groups on college and high school campuses located in all fifty states. 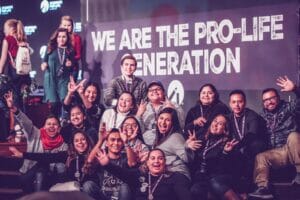